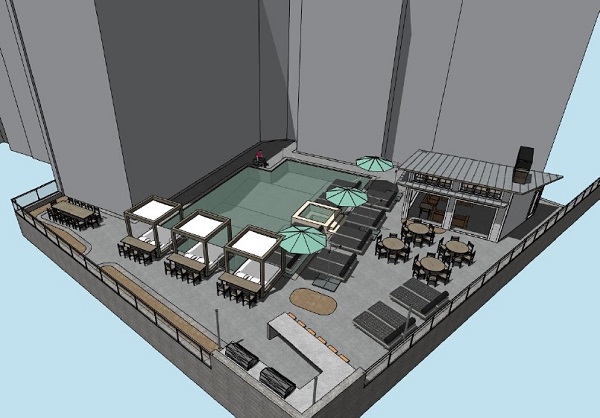 Amenities at The Station at Chester Village will include a pool deck with cabanas. (Schell Brothers image)

Construction is set to start on a $20 million development that will add hundreds of new apartments in the heart of Chester.

A group led by current and former executives of homebuilder Schell Brothers is preparing to start site work for The Station at Chester Village, a 201-unit apartment building set to rise on about 4.5 acres at 11910 and 11912 Chester Road, behind the Allen Tire and retail strip at Route 10 and the railroad tracks. 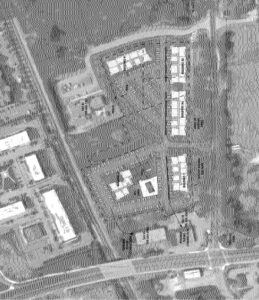 The seller was a group that included and was represented by Jim Daniels, a real estate agent with Chester-based Longest & Daniels Realtors. Chesterfield County property records list another group member, Curtis Cline Jr., whose family had owned the land since at least the 1960s.

The latest county assessment valued the two parcels collectively at about $1.07 million.

Burnette, who parted ways with Schell last year but continues to work with the Delaware-based builder’s owners on area apartment projects, said the Chester Road site was brought to their attention off-market by Daniels.

He said its central location in Chester and proximity to the mixed-use Chester Village development made the site appealing for apartments.

“We think it provides a very unique and desirable location, whether it’s millennials, whether it’s people retiring,” he said. “You can get to (Route) 288 and (Interstate) 95 really quickly. You’ve got all those restaurants and different businesses right there in the heart of Chester.

“As somebody who grew up in Chester, this is going to be kind of a shining star down there,” he said.

Chesterfield supervisors approved the project in late 2019. Plans call for a cluster of five apartment buildings that will house 65 one-bedroom units, 126 two-bedrooms and 10 three-bedrooms. Floorplans will range from 650 to 1,300 square feet in size. Burnette said rents have not been set for the apartments, which he said would be market-rate. 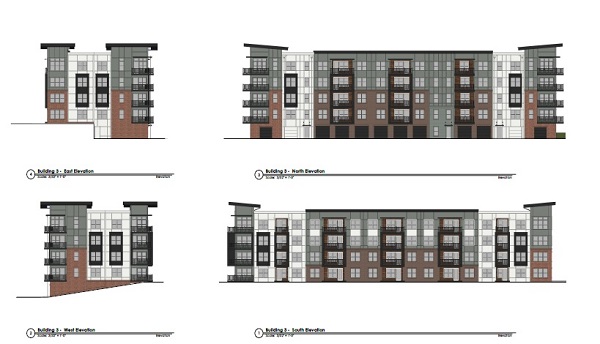 The four- and five-story buildings will be constructed with brick or stone and Hardiplank facades. The complex will include a 4,000-square-foot clubhouse, and amenities include a pool with cabanas, an outdoor fireplace and grilling stations. Walking paths are to be added along Chester Road, where additional turn lanes will be constructed to provide site access.

Burnette put the development cost at just under $20 million. Virginia Housing is providing financing for the project, and Costa Canavos with Berkadia handled mortgage lending.

Burnette said the complex will add a rental product unlike what’s available in the Chester area now. While apartments can be found in Chester Village and in the vicinity, he said the closest comparable apartments are some distance away. 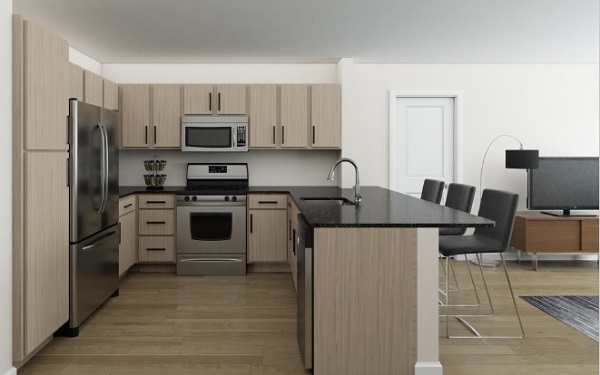 An interior rendering of the apartments. (Courtesy of Shane Burnette)

“This particular area, in order to get a Class A project like this, you have to go all the way to Route 1 or into northern Chesterfield,” he said, referring to newer apartments such as The Jane at Moore’s Lake, a 385-unit complex that George Emerson and Phil Roper developed near Route 1’s intersection with Route 10.

The apartments are the latest for Burnette and his former Schell colleagues. He and other owners were behind Glenmoor Oaks, a $40 million, 248-unit apartment complex at Magnolia Green that got underway while Burnette was still a division president with the company.

Elsewhere in Chesterfield, in the Winterpock area, Schell Brothers recently secured approval for what’s now planned to be a 669-home residential development off Bethia Road. Plans approved this month now call for a mix of 307 houses, 74 townhomes and 288 apartments on about 250 acres.

The Ironbridge Road corridor is redhot with development. By my count, more than 1000 Class A apartments are underway between the Chippenham Parkway and Route 1, plus a surge in townhouse and single family construction. This Chester location is a unique one in that it’s being developed, per this report, at nearly 50 units per acre, obviously on a concrete podium, and somehow at $100,000 per door. If that’s the case, this will be a smashing success!