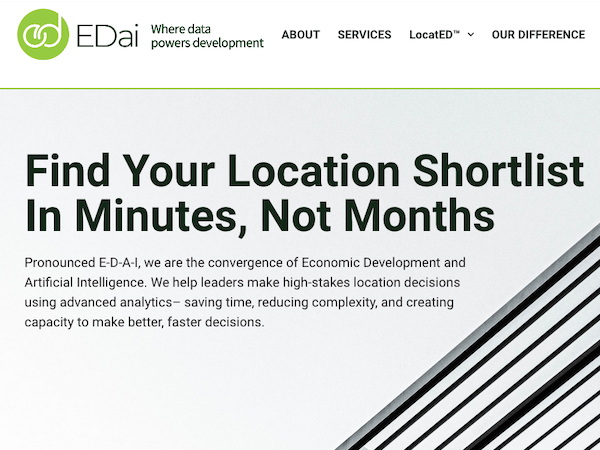 Sean Brazier learned a thing or two while working for the Virginia Economic Development Partnership during the organization’s efforts to woo Amazon’s coveted HQ2.

One particular lesson stuck with him — so much so that it became part of the impetus for him to strike out on his own to launch EDai, a Richmond-based startup that aims to improve the economic development site-selection process using artificial intelligence.

The company launched earlier this year and is especially focused on the challenges that Brazier observed with amassing economic development data and effectively communicating it. He felt the process could be made more efficient.

“I saw first-hand how much time and effort went into compiling and analyzing data and then visualizing, then narrating the takeaways,” Brazier said of his time as a staffer at VEDP, which ultimately was successful in landing the Amazon deal.

The company’s main product is its LocatED portal, an automated system designed to make sense of the reams of data points that go into decision-making for economic development sites.

Brazier said the site search process is a time and resource intensive one, as real estate developers weigh everything from potential locations and markets to incentives and revenue projections among other data points. His portal is intended to make the process of data collection and analysis faster, and also elevate other important factors beyond just the site’s location.

The company’s target audience is local and state economic development organizations, as well as businesses in the manufacturing, IT and professional services sectors. EDai’s services can be used both by localities that want to attract new businesses as well as companies that are on the hunt for locations to grow their business.

Users of LocatED are prompted to punch in five inputs (whether it’s a new project or expansion, the sector, promised number of jobs, average wages and capital investment) into the portal, which spits out an in-depth briefing on location options throughout the contiguous United States.

LocatED uses several proprietary sources as well as public data from the Census and Labor bureaus to model out incentives, economic impact, real estate, characteristics of labor markets and other factors.

EDai, which is in the process of lining up its first round of clients, charges a retainer fee for its services, in which clients provide the necessary information in exchange for a report that EDai creates with the LocatED portal.

By the summer, the company plans to further refine its process and make it available as a subscription service. And, by that time, clients will be able to use the portal themselves. 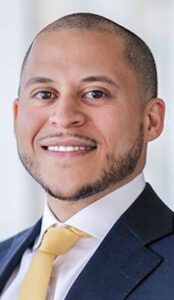 Brazier declined to share how much money has been spent to develop LocatED.

Brazier said that as the economy shifts toward a focus on service, and as employee talent becomes more important, the site-selection process has become more complex.

It’s become more than incentives and real estate, he said, but also quality of life for future employees, the local talent pool and overall business climate. Between EDai’s platform and its supplementary consulting services, the company pitches itself as the best means to consider all these factors.

It was last summer that Brazier began to kick the idea around with Terron Ferguson and Elijah Lowe, two friends who attended Morehouse College at the same time Brazier did. They’re now helping as advisers to EDai, which officially launched in January.

“It’s been a long time coming and we just landed on a good idea,” Brazier said. “I love the research side. I talked to Elijah about the data and how to make it impactful and we started to see a business opportunity.”

The launch also was spurred by Brazier earning a doctorate degree in economic development in the fall, after which he found himself in need of an outlet for insights and research he had gathered. Then came the coronavirus pandemic, which he said became the perfect time to focus on the problem he hopes to solve.

“Life is about timing. My wife has been very supportive of my passions and is a part of the EDai team. We do not have kids yet and fortunately have been able to save enough money over the last few years,” Brazier said. “We’ve also been blessed to stay healthy during this pandemic, so we were able to use the indoors time focused on this idea.”

Brazier works full-time at EDai. Ferguson (a corporate and nonprofit lawyer) and Lowe (a scientist at General Dynamics Information Technology) both serve as part-time advisers to EDai. Brazier’s wife Taylor Croley (a marketer for Alfa Laval) is also a part-time adviser for the company. The four-person team works remotely.

EDai is among 10 startups going through accelerator Lighthouse Labs’ recently announced 2021 spring class. The others are:

The spring session will run March 15 to June 4. Four of the companies are based in Richmond.

The three-month program gives participants access to mentorship, accounting and legal support as well as $20,000 of equity-free investment.