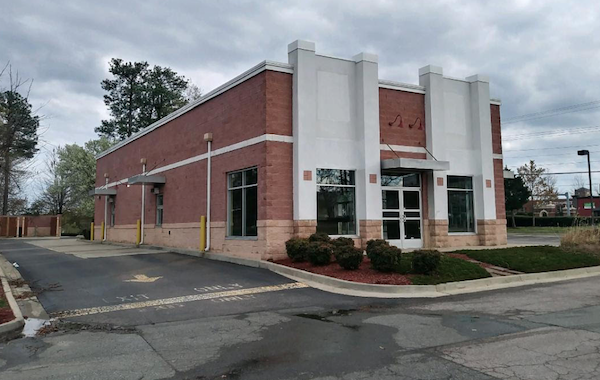 Green Leaf plans to open its first satellite dispensary at 11190 W. Broad St., which is in the Shoppes of Best Buy shopping center. (Jack Jacobs photo)

The spot where hungry Short Pump shoppers used to go for Colonel Sanders’ secret blend of herbs and spices will soon be dishing out an herb of a different sort.

Green Leaf Medical, the Maryland-based company that built and runs the Richmond region’s first and thus far only medical cannabis production facility on the city’s Southside, inked a lease earlier this week for its first satellite retail dispensary in the area.

The company is taking over 11190 W. Broad St., a standalone building in the Shoppes of Best Buy that was most recently home to a combined KFC and Long John Silver’s.

Green Leaf hopes to open the dispensary, which will feature two drive-thrus, in about four months. The dispensary will also have walk-in service and on-site pharmacists, and will make deliveries.

Green Leaf CEO Phil Goldberg expects the company will spend $500,000 to $600,000 to build out the dispensary, and said the drive-thru would be a boon for patients’ ability to access the dispensary and would cater to pandemic-inspired shopping trends.

“We’re aiming to have a similar experience (as the Southside facility) in a new location, but the drive-thru is huge,” Goldberg said.

Patients will be able to order ahead online and then pick up their purchases at the dispensary, as well as make purchases on site. Patients will have to confirm they have the proper credentials to buy medical marijuana products.

Goldberg said the property is zoned appropriately for what the company has planned, but it does intend to run the drive-thru idea by the Virginia Board of Pharmacy to ensure the concept will pass muster. He was confident it would be approved, likening it to the drive-thrus seen at pharmacies.

“We’re not already doing drive-thrus so we’re under the impression we need approval before we move forward,” Goldberg said. “A lot of rules and regulations are based on how they handle prescription drugs on the pharmacy level.”

The company has plans for a total of five satellite dispensaries in the region. Goldberg said the company is on the hunt in Scott’s Addition, Petersburg, Ashland and Carytown, and has a particular interest in properties that feature drive-thrus.

Green Leaf (stylized “gLeaf”) makes cannabinoid oil-based products, which are sold to registered and prescribed patients as medical treatments. The company operates an 82,000-square-foot growing facility and dispensary at 2804 Decatur St., which opened in November.

Green Leaf is in the process of being acquired by New York-based Columbia Care as part a $240 million deal announced in December.

The acquisition is subject to regulatory approval, which is still in process, Goldberg said Thursday. Columbia Care would acquire Green Leaf’s operations in Virginia, Maryland, Ohio and Pennsylvania if the deal is approved.

This is great. Can’t wait to se these go live.

Well in ashland there is 2 empty burger kings that would be good for this.

Randy Marsh must be stoked. Eric’s probably bummed though.

Why are all the profits for this going to a few out of state companies instead of local mom and pop stores? Bars could sell it , bring in revenue to a sector that badly needs it.