In selecting locations for their new corporate offices, an area homebuilder and a local staffing firm both ended up taking a less-traditional route: converting decades-old retail spaces into their respective headquarters.

Eagle Construction of VA, previously based at West Broad Village, has opened a new HQ in the Canterbury Shopping Center at Patterson Avenue and Pump Road, where it’s relocated its offices and home design gallery.

Across the river, a retail strip in front of the Chalkley Place shopping center at Iron Bridge and Chalkley roads is now the home base of Elite Force Staffing, which moved from a location on Chester Road after completing a $1.1 million overhaul of its new space. 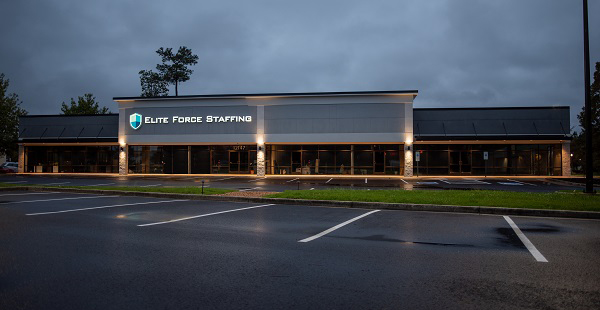 Both moves fill buildings that were designed for retail but are getting new life years after their prime. The Canterbury space, built in 1969, had once housed a carpet gallery but had been largely vacant in recent years, while the Chalkley building, at 12147 S. Chalkley Road and built in 1997, had begun to decline, Elite Force President Steve Worrell said.

“It’s been an eyesore in Chester for many years,” Worrell said. “To be honest, when I would explain to people where our building was, most folks weren’t aware of the building. Businesses had a hard time surviving due to the lack of visibility.”

After buying the five-unit, 10,000-square-foot building for $1 million in 2018, Worrell improved its visibility by having trees removed and updating the exterior with new canopies and windows, along with a reworked parking lot and new lighting and signage. 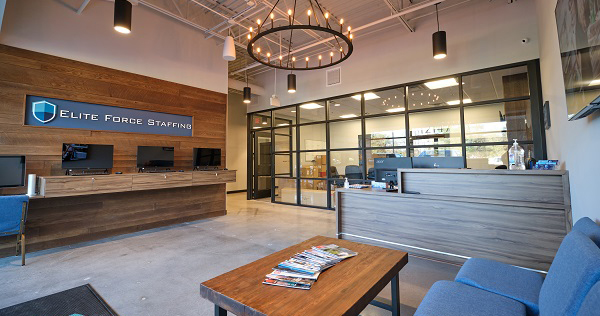 Elite worked with John White of 510 Architects and Shannon Tootle of Chesterfield-based Signature Designs on the exterior and interior renovations. Billy Daniels with Chester-based Daniels Custom Builders was the contractor on the project, and Peter Vick with Colliers assisted Elite with its search.

Worrell said he enlisted 510 because he wanted the building to have “a Scott’s Addition look,” referring to the former industrial neighborhood where the architecture firm is based.

“510 nailed it,” Worrell said. “Our new design allows us to provide a better quality of life for our employees, while enhancing collaboration and operational efficiency. The technology that we implemented allows us to operate at a very high level.”

Worrell said the building provides room to grow for his firm, which he started out of his home in 2012 and now totals about a dozen employees. The company screens, hires and places workers specific to the construction industry. He said its business grew 71 percent last year with $32 million in annual revenue and is on track to top $40 million this year. 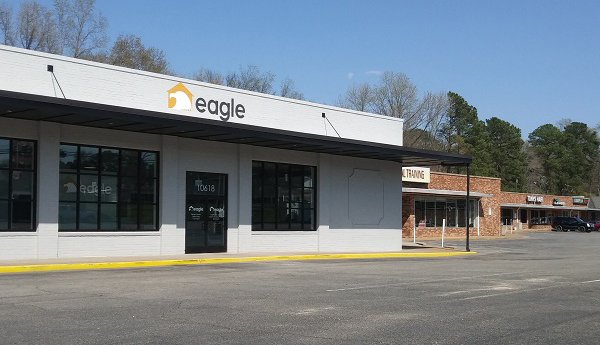 Eagle’s space in the shopping center, once a carpet gallery, had been largely vacant for several years. (Jonathan Spiers photo)

For Eagle Construction, it was the visibility of Canterbury’s location at Pump and Patterson, as well as its proximity to areas where Eagle is actively building, that drew the homebuilder away from West Broad Village, where it has and continues to erect homes.

“Our lease term was up, and we wanted a new customer experience,” said Ricky Core, president of parent company Markel | Eagle Partners. “We really wanted to do something from scratch on the design gallery side, so having a blank canvas of the shopping center was a great opportunity, and then we filled in the office needs around that.”

Eagle signed a multiyear lease with owner The Wilton Cos. for 16,000 square feet in the shopping center, which recently received another shot in the arm with the redevelopment of its Texaco gas station into a Dunkin’ Donuts store. The center also is home to Chez Max and Rare Old Times restaurants.

Eagle Construction President Josh Goldschmidt said they had considered the same space when they renewed their West Broad Village lease five years ago. He said the ability to customize the space, which is comparable in size, was as appealing now as it was then.

“We thought we could make a cool-looking building, and Wilton let us run with the elevation,” Goldschmidt said. 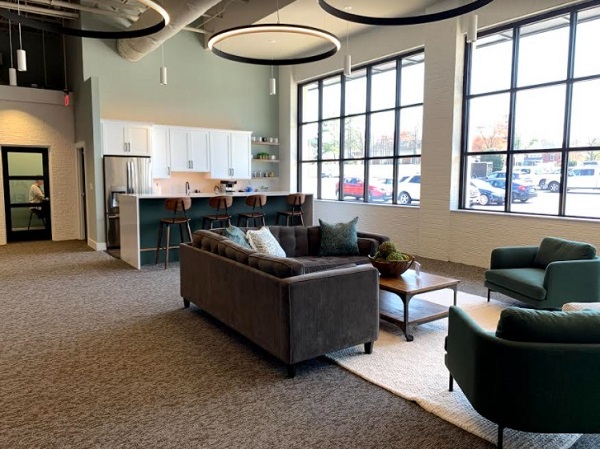 Eagle worked with Baskervill on the space’s design. (Courtesy of Eagle Construction)

Eagle worked with Baskervill to design the interior, which includes communal and individual working areas, phone booths, the design center and showroom, and rear windows added to provide more light.

Goldschmidt didn’t say how much Eagle invested in the buildout. The company moved into the space in early March and will have about half of its 110 employees based there.

Goldschmidt said the designs were conceptualized over the course of the pandemic and with employees returning to the office in mind.

“It’s a very interesting time to relocate during COVID. We wanted to be able create as much of an open work environment as possible,” Goldschmidt said. “I think having a new state-of-the-art office space has been a great uplifting thing for people culturally to come back.”

Interesting. We are going to have a lot of dead retail space that needs repurposing coming on, especially dead suburban strip malls like this.

US was over-retailed before the internet. Now it’s nuts

Agreed Charles, but this is typically what happens outside the city as neighborhoods and retail moves outwards. A good example is the former shopping center in the SE corner of Midlo Tnpk and Powhite. Its mostly medical use (for 20 years) now – and quite busy. They work because there’s no need for visibilty or retail convenience; just good space, parking, etc.