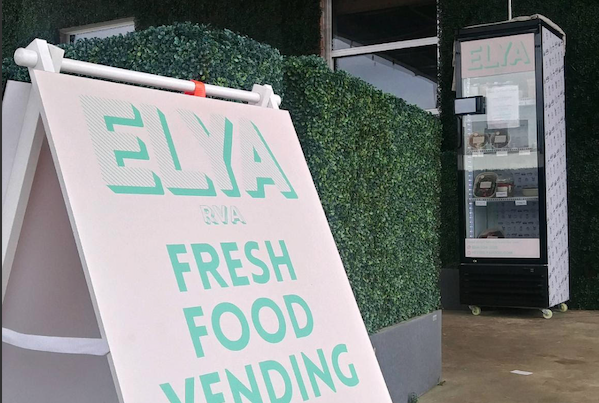 ELYA recently set up one of its refrigerated vending machines in Scott’s Addition outside of Alton Lane’s office on West Leigh Street. (Jack Jacobs photos)

An automated newcomer has made a small step into the Scott’s Addition food scene that it hopes will lead to bigger things.

ELYA, which sells quick-serve healthy entrees and snacks out of custom refrigerated vending machines, installed one of its machines in the neighborhood.

It chose a spot outside the corporate office of menswear brand Alton Lane’s corporate office at 3121 W. Leigh St. earlier this month, bringing its total number of operational machines to three units in the city about six months into its launch.

One is in ELYA’s kitchen-showroom space at 7 E. Third St. in Manchester, and ELYA set up a machine inside The Locks Tower Apartments in downtown earlier this year. The company launched in October.

ELYA founder Danny Sterling’s vision is to introduce his quick, self-serve concept in offices, hospitals, apartments and universities to fill what he sees as a gap in easily accessible, healthy food options in those settings. ELYA is an acronym for Eat Like Your Ancestors.

In addition to being a coveted office user, Alton Lane also has a location that will, Sterling hopes, bring more exposure to his concept.

“It fits within the category of what we’re looking to do. We’ve been trying really hard to get into health care (clientele) which comes with its own challenges like exposure. A place in Scott’s Addition can really get that exposure,” he said.

Snacks and breakfast items run about $4 to $7. Bowls and salads sell for $7 to $13. Fridge users swipe a credit card to open the fridge and retrieve the desired item or items, which are then charged to the user’s card. 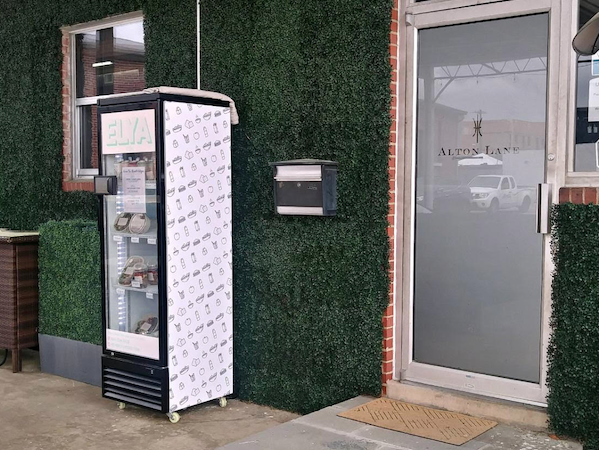 ELYA’s refrigerated vending machines feature a range of quick-serve meals made by the company. Users swipe a credit card to access and purchase the machine’s offerings.

Sterling said that, in addition to the three machines he has around town, he has two more in reserve for an expansion into health care facilities.

Sterling said that he connected with Alton Lane as the latter sought to take the sting out of the transition back to regular office operations after months of working from home due to the coronavirus pandemic.

“We’re all going to have to deal with challenges as things open up again,” he said. “I can assume there is going to be some growing pains from waking up at eight, grabbing your cereal and getting to the office at nine.”

Offices and workplaces can either pay a monthly fee to host a machine or subsidize the machine’s offerings. Individual agreements can vary. For example, the machine in the Locks is only accessible to residents, while the Scott’s Addition machine is accessible to the general public as well as the office’s workers.

ELYA is also weighing whether to add more dinner-style meals intended to be reheated to its Locks machine, owing to its location in a residential space. The company has also introduced third-party drinks and snacks to its machines since its launch, and has done several pop-up events.

“We’re trying really hard to figure out what initiatives and new programs best align with the mission of making it accessible,” Sterling said. “The top shelf has become more consumer-packaged items, which takes some of the heat off us.”

Sterling wants to hire three to four employees this summer to launch an online ordering service.

In other Scott’s Addition food-and-beverage news, Mediterranean concept Pinky’s is preparing to open in the former Urban Farmhouse space on Norfolk Street.