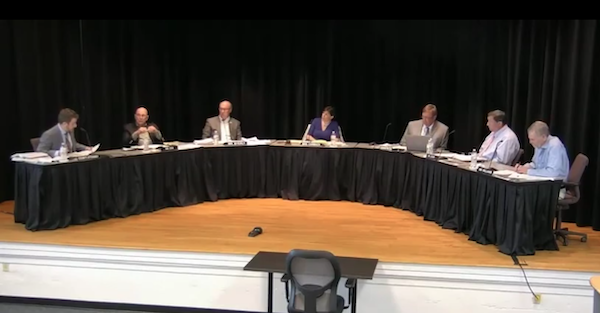 The Powhatan County Board of Supervisors recently voted to create a new real estate assessor’s office. The office will conduct reassessments on an annual basis. (Screen grab)

Powhatan County is putting the pieces in place for an in-house county assessor’s office that will conduct annual real estate reassessments.

The new setup will be a departure from the status quo on two counts.

First, it brings the process in-house under the county administration’s auspices. Currently, the work is shopped out to Daleville-based Wampler-Eanes Appraisal Group, which operates under the direction of the county’s commissioner of revenue.

Second, the county assessors would do annual reassessments, rather than the current schedule of a reassessment every two years.

The move brings Powhatan County in line with the reassessment calendar utilized by most localities in the Richmond area.

County Administrator Ned Smithers framed the change as a benefit to county property owners in part because property values will shift more gradually with yearly tweaks than they do with a biennial schedule.

“It’s a good practice to have steady growth as property values change,” he said.

The county’s proposed fiscal year 2022 budget includes about $542,000 to stand up the office, which is expected to consist of three appraisers and an administrative staffer. In addition to some one-time costs, $100,000 of that total would be used to fund the tail-end of the Wampler-Eanes contract. The Board of Supervisors is slated to vote on budget adoption May 10.

The county pays Wampler-Eanes about $220,000 per assessment cycle. The in-house operation is expected to cost the county about $350,000 a year to operate, Smithers said.

The proposed budget also provides for Powhatan County to switch to the calendar year, rather than the fiscal year, for real estate tax billing.

Smithers hopes to have the office’s chief in place by July.

Supervisors voted to create the office April 19. Some county residents turned out to criticize the creation of the office, saying that to pull property reassessments from the direction of the commissioner of revenue, who is an elected official, would in turn diminish the citizenry’s oversight on property taxation.

The county’s next reassessment will set property values that go into effect Jan. 1, 2022. There are approximately 15,500 properties in the county that are subject to the assessment.