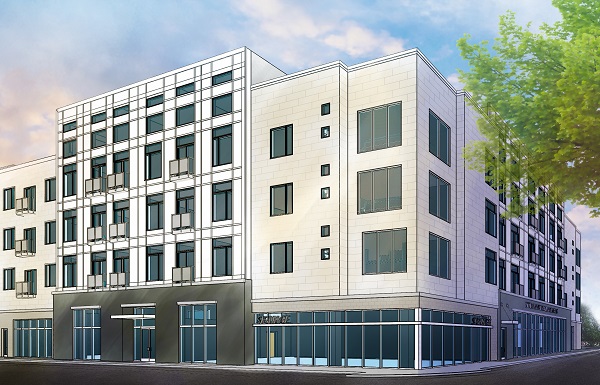 A rendering of the proposed mixed-use building at Dawn and Tazewell streets. (Courtesy of Saunders + Crouse Architects)

A former deputy chief administrator for the City of Richmond is representing the team behind a proposal for a five-story building off a stretch of Chamberlayne Avenue that’s been attracting new investment in recent years.

Doug Dunlap, who served as the city’s director of housing, community and development before leaving City Hall in March 2020, is applying for a rezoning on behalf of a property owner that wants to develop a mixed-use building with 52 apartments and ground-floor commercial space at 711 Dawn St.

The half-acre site, at the corner of Tazewell Avenue just north of where it branches off from Chamberlayne, is across Dawn Street from Tabol Brewing, which opened its doors in 2019 in the area known as Chamberlayne Industrial Park.

Two existing buildings would be demolished on the Dawn Street site to make way for the project. The adjoining buildings fill the bulk of the corner parcel and currently house paving supplier Neyra Industries and general contractor T K Davis Construction Co.

Dunlap is representing the applicant on a rezoning request that the city Planning Commission is scheduled to hear at its meeting Monday by property owner Max Holdings LLC, which is registered with the State Corporation Commission by T K Davis owner Tommy Davis.

Reached Friday, Dunlap declined to discuss the project beyond what’s included in city documents without Davis’s permission but did say he’s not part of the ownership or development group. A message left for Davis at his office, which was closed late Friday afternoon, was not returned.

The buildings at 711 Dawn St. (Photo by Jonathan Spiers)

City property records show that Davis’s LLC has owned the property since 2001, when it was purchased for $170,000. The property most recently was assessed by the city at $317,000.

The apartments would consist of 34 one-bedroom and 18 two-bedroom units. One-fifth of the units would be designated for families making 80 percent or less of the median household income. The 7,000-square-foot ground-floor commercial space would be targeted to professional and personal service businesses.

An application from Dunlap submitted to the city in December describes the development as aligning with the VUU/Chamberlayne Neighborhood Plan. It was adopted by the city in 2016 and calls for mixed-use, pedestrian-friendly development in the area of Chamberlayne, Brook Road and Lombardy Street.

Dunlap also noted other investments in the area since that plan was adopted, including Tabol, neighboring dog training business Sit Means Sit, and residential infill developments such as the nearby School Street Apartments, a 152-unit apartment building for seniors at the intersection of School Street and Chamberlayne from Crescent Development and Spy Rock Real Estate Group.

The application states that the building’s design would integrate the neighborhood’s industrial character. Virginia Beach-based Saunders + Crouse Architects is designing the building. A contractor and engineer were not specified in the application.

The project adds to a recent wave of development interest and investment along and around Chamberlayne.

Last year, a portfolio of 23 apartment buildings with nearly 500 units sold to a New Jersey-based buyer in a trio of multi-parcel deals that totaled $27.5 million.

And farther west near VUU, the 200-unit Foundry apartments from Virginia Beach-based The Lawson Cos. continue to take shape between Brook and the interstate. A few blocks north across Brook, MVP Equities is signed on to develop a 224-unit complex between the post office and adjacent Spectrum apartments.

Fantastic. I have a listing at 2412 North Lombardy. It’s .62 acres with great frontage. A wise developer said once “If you aren’t buying land that won’t be ready in 5 years, then you have already missed the boat.”
David Franke, Broker
Turnkey Real Estate Services LLC