A rendering of the plaza planned at Church Road and John Rolfe Parkway. (Images courtesy of Henrico County)

Less than a year after scrapping a previous proposal that called for more than 200 apartments, the owner of a tract at a prominent Henrico crossroads has come back with a new plan — and a homebuilder on board.

Rebkee Co. is working with Main Street Homes on a reworked development for the 8-acre site at the convergence of John Rolfe Parkway and Pump and Church roads.

Pushback to The Shire prompted Rebkee to scrap it last summer, with principal Rob Hargett saying he would rework it. In the time since, he reached out to Main Street Homes, a Midlothian-based builder that Rebkee worked with on another townhome development, Winterfield Park.

“We changed the plan after feedback from the neighbors,” Hargett said. “I didn’t get a lot of love for the last one. So, we went back to the drawing board, we listened to them and we brought back something we thought they wanted.”

Hargett said comments received in a virtual public meeting for the project last month were complimentary about the new plan.

“The folks that (participated) were glad we listened. We feel like we answered their concerns and came up with a better product,” he said.

Rebkee and Main Street are seeking a rezoning and provisional-use permit from Henrico County to allow for the development.

While county planners note the proposal is inconsistent with Henrico’s future land use plan, which calls for commercial development for the site, they do support the proposal, describing it as “a logical expansion” of townhome developments that have risen around it. 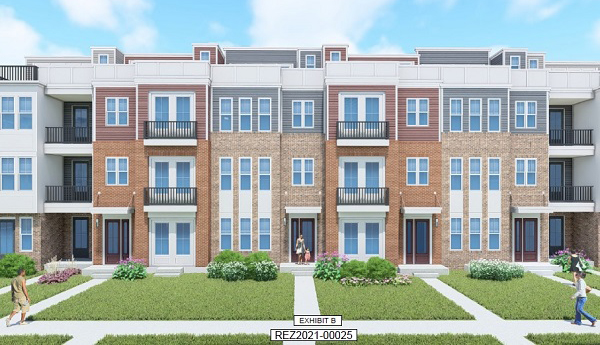 A rendering of the four-story interior townhomes.

The firms are working with Hirschler attorney Jeff Geiger in the application process. The case is scheduled to go before the county Planning Commission on May 13.

Kay Pangraze, land acquisition manager for Main Street, said the townhome units would vary between three and four levels, with 45 three-level units facing out toward Church Road and John Rolfe Parkway, and the remaining four-level units on the interior of the site.

She said prices for the units have not been determined but would be comparable to price points in the area. Units would include two-car garages, and Pangraze said outdoor spaces would be worked into the development. Unit sizes were not provided.

Plans also call for a plaza at the corner of Church and John Rolfe. A holdover from The Shire, the plaza would be designed as a community gathering space and would add to other amenities including sidewalks, landscaping and food truck stations.

Pangraze said a development cost has not been determined. Main Street is under contract to purchase its portion of the site, with Rebkee to develop the scaled-down commercial portion.

Hargett said that space could accommodate something like a daycare user or be subdivided for multiple tenants.

“To me it feels like a daycare site,” he said. “We’ll just have to see who shows up, because I don’t think there’s a whole lot of commercial going up outside of baby daycares right now, because there’s so many residential units being built everywhere.”

No stranger to Henrico, Rebkee is currently involved in the redevelopments underway at Regency mall and Virginia Center Commons. It also set the stage for the Everleigh Apartments senior living facility in Short Pump, which was developed by South Carolina-based Greystar.

Main Street also is planning Cosby Village Square, a commercial section beside Cosby Village that would fill 20 acres along Hull.