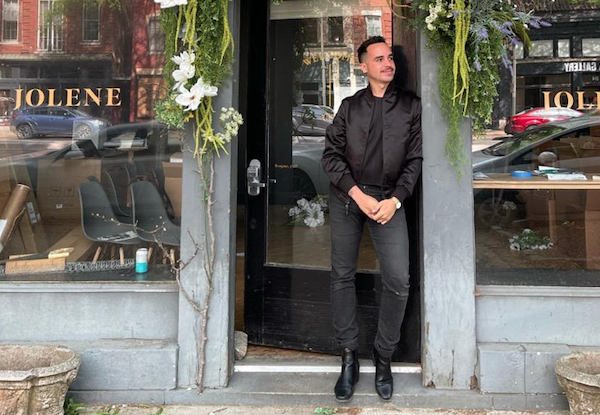 Jolene is a home goods company owned by Nolan Beck–Rivera. The e-commerce operation recently launched, and also is currently operating a pop-up shop in downtown Richmond. (Courtesy of Jolene)

A new local e-commerce company is testing the waters for a potential permanent storefront by starting with a pop-up in downtown Richmond.

Jolene, which launched in Richmond in early April selling home goods online, this month opened a shop in the roughly 400-square-foot space at 211 W. Broad St. Owner Nolan Beck–Rivera expects to run the shop for about three months.

Beck–Rivera opted for an online operation to decrease the level of risk associated with launching the company.

A Cleveland Art Institute graduate who lived in Cleveland for 10 years before moving to Richmond in November, Beck-Rivera said starting small and online allows him to build a customer base that leans on his friend network in Cleveland while he establishes himself in Richmond.

A brick-and-mortar store is a long-term goal of the company, and Beck–Rivera said a pop-up was appealing as a low-risk way to try one out.

“I’m trying to do it in a measured way, so that, if the store were to fail, the worst case scenario is I have Christmas gifts for the next 10 years,” he said.

Jolene’s product range is focused primarily on the kitchen and dining room. The company carries handmade vases, candles, serving utensils and dishes among other items.

Beck-Rivera sources his offerings from artists and designers based in Cleveland, Richmond, Europe and Asia. The items span a range of price points from $12 locally made salt-and-pepper cellars to a set of French vases that cost $1,000. His inventory currently consists of about 100 objects, some of which are in sets, and he hopes to add African-made items in the future. He’s invested about $10,000 to $12,000 in Jolene.

The company was born of Beck–Rivera’s passion for dinner parties and helping friends with interior design.

“In Cleveland, my apartment was a 400-square-foot studio and I basically put in a 10-person dining table and that was it. It was basically just for sleeping and dinner parties. It’s always been part of my ethos.”

That setup led to his apartment being featured in Dwell, an interior design and architecture publication, in July of last year. Beck–Rivera’s interior design work ramped up thereafter. He now works in interior and graphic design while running Jolene as a part-time venture.

The name Jolene is a reference to a Dolly Parton song of the same name.

Jolene’s pop-up space is across the street from Choong Man Chicken, which took over the space left vacant by longtime restaurant Comfort.