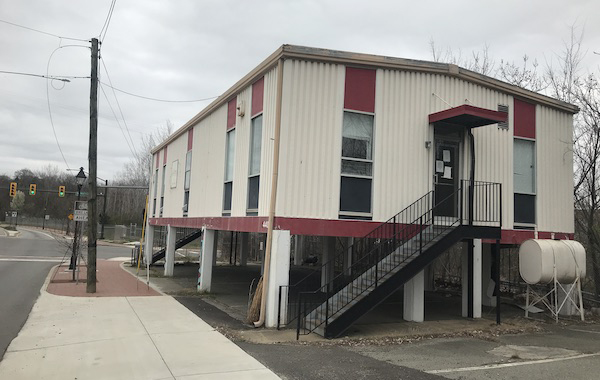 The abandoned building at the site at 4401 E. Main St., where WVS Cos. is planning a six-story mixed-use building with 203 apartments. (BizSense file)

Business on the agenda includes two requests for rezoning to TOD-1 Transit-Oriented Nodal District. WVS Cos. seeks the zoning for a site it owns at 4401 E. Main St., where it’s planning a six-story mixed-use building with 203 apartments. TOD also is sought by 1801 E Main LLC for a half-acre plot at 1801 E. Main St., which it purchased in November.

Hourigan seeks rezoning for a multifamily housing development that would replace the Southern States silos at 2-4 Manchester Road. Zach Kennedy is requesting a special-use permit for a mixed-use building with 12 apartments at 1005 Westover Hills Blvd.

The commission also will review final plans for a parklet and pedestrian plaza at Brook Road and Marshall Street in Jackson Ward, and it will receive a presentation on the latest proposed zoning for areas north of Broad Street across from the Fan District. A previous proposal was withdrawn late last year.

At their meeting last week, Henrico supervisors approved rezoning and provisional-use permit requests for a 500-unit apartment development to replace the former JCPenney at Virginia Center Commons. The apartments will add to a larger redevelopment of the VCC site by Rebkee Co. and Shamin Hotels, which purchased the 7-acre department store building in January for $3 million.

The board also approved RJM Land LLC’s plan for a detached-homes subdivision on 30 acres on the north side of Mountain Road west of Woodman Road. HHHunt was allowed to increase the number of condos for its “The Corner at Twin Hickory” development from 90 to 105. And Hundred Acre Woods Inc. secured approval for a zero-lot-line residential development on a 33-acre tract at the terminus of Opaca Lane near Wyndham Forest.

John Rolfe Mews development plan gets thumbs up in Henrico

At its meeting last week, the Henrico County Planning Commission supported plans from Rebkee Co. and Main Street Homes for 81 townhomes and 6,000 to 8,000 square feet of commercial space on an 8-acre site at the convergence of John Rolfe Parkway and Pump and Church roads. Called John Rolfe Mews, the reworked plan is scaled down from a previous proposal called The Shire.

The project is intended to stem flooding in that three-mile stretch, and would include construction of three bridges. The project is expected to begin in January 2022 and take up to two years to finish.

JMT, a Maryland-based engineering firm, is handling the project engineering. The county is currently in the process of selecting a general contractor. Click here for more information about the project.

A virtual public meeting is scheduled for 6 p.m. May 20. Click here to register for the event.

The Powhatan County Board of Supervisors approved the county’s budget for fiscal year 2022 last week.

The $136 million budget features a $69 million general fund. Supervisors also cut 6 cents from the real estate property rate, which will be 79 cents per $100 of assessed value starting July 1.

The budget allocates funds to stand up a new in-house assessor’s office, as well as a dedicated permit center within the building inspections department.