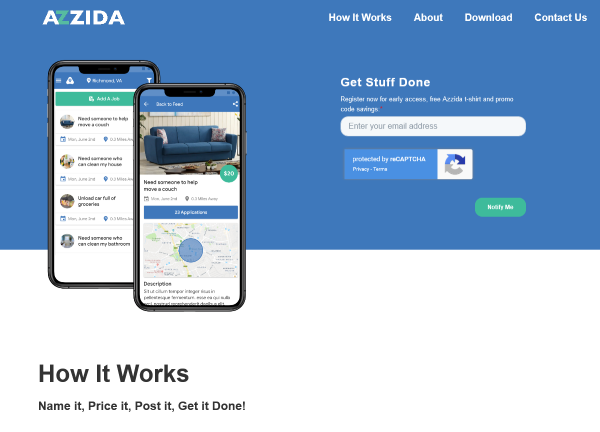 Azzida, which launched this month in the Richmond area, is an app-based jobs board for errands and odd jobs. What makes it unique is that posters set the rates. (Screenshot)

Two local entrepreneurs are looking to give popular on-demand jobs sites like TaskRabbit and Handy a run for their money.

Lawrence Bunnell and Nathan Clarke are the founders behind Azzida, an app designed to facilitate paid tasks such as dog walking or hedge trimming.

The app, which launched this month, allows users with a to-do list to post job descriptions and related prices and photos to the app. Job posts appear in a feed that can be viewed by users hunting for jobs. Posts can also be shared on social media.

Azzida collects a 3.5 percent transaction fee from the job poster and keeps 15 percent of the payment doled out to the contractor. Payment is handled through the app.

Azzida is initially focused on the Richmond area, though the platform is usable nationwide.

“Our marketing and engagement will be targeted to the Richmond area for now,” Clarke said in an email. “We will not be constraining usage. So, if it were to organically grow to other regions, we would welcome that.”

Job posters are expected to mostly be retirees, empty nesters and older adults, a segment that’s on track to increase as the large Baby Boomer generation continues to age. And though the platform has been several years in the making, the co-founders say the pandemic has created an opportunity on the job-seeker side due to recent disruptions in the region’s employment.

The concept was inspired by Bunnell’s son’s experiences as a contractor and Bunnell’s own experience when he and his wife bought a home a few years ago.

When his son started work as a contractor, he found many people contacted him with jobs that were too small to be profitable for his business. Meanwhile, Bunnell found himself in need of help to tackle the pile of odd jobs that came with home improvement projects.

“We went onto sites like Facebook and Nextdoor,” he said. “It was a lot of scouring and bidding and hassle.”

Bunnell and Clarke hope the Azzida concept will appeal to people who may already use Facebook or Craigslist to find handymen.

Azzida also tries to set itself apart from more established competitors like TaskRabbit and Handy by allowing job posters to set the rates for jobs.

TaskRabbit contractors set their own rates. Handy sets rates for its contractors, and hourly wages are up to $22 for cleaners, up to $45 for handymen and up to $62 for lawn care, according to its website.

Bunnell said that since the Azzida concept puts pricing in the hands of job posters, it might find a niche amidst the competition.

“We believe that the reason we haven’t seen competitors taking the Azzida approach to allow job providers to name their own price is that they have really just taken the old contractor model of bidding and estimates and put it online,” Bunnell said. “Competitors would have to completely flip their current models in order to offer a job provider-centric approach and, thereby, risk alienating their entire workforce.”

Clarke is a software engineer. Bunnell works as a data analyst in the financial sector. Bunnell has a background in real estate and e-commerce startups, and he was a co-founder of Richmond-based real estate services company Homebytes.com. Both Clarke and Bunnell work at Azzida, which is based in the Richmond area, on a part-time basis.

The duo plans to use print and targeted social media marketing in small areas of the metro region to get the word out about the app, which is available on Google Play and the App Store.

This is awesome concept and I can’t wait to use; even during Pandemic having a small lot row home you have little odd jobs sometimes (especially yard work) too small for large firms but the prices on places like TaskRabbit sometime had such high rates and minimum hours that you saw no savings compared to a large local contractor. Looking forward to downloading and trying it out!

Thank you for the feedback! We look forward to seeing you on the app. During your experience if you have any additional feedback we would love to read it. You can reach out to me at [email protected]