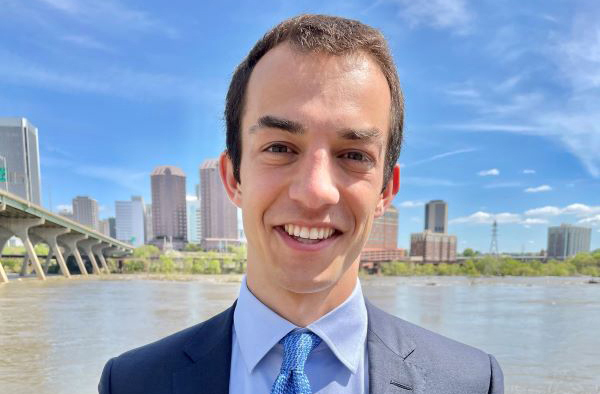 Piggybacking on the growing popularity of stock trading site Robinhood, a former local Capital One employee has let loose a trading app of his own.

David Weiss recently launched Ayrro, which provides retail investors the ability to automate stock market trades by acting as an add-on to guide transactions made on Robinhood.

Ayrro users can set preferences based on a preset algorithm, create their own or pay a fee to access another user’s algorithm. The app executes trades on Robinhood, so Ayrro users must have a Robinhood account to make trades.

People new to stock trading can select a starter algorithm, which prefills inputs. It’s also possible to manually set criteria, such as which stocks or stock exchange-traded funds to trade, investment amounts, when to buy or sell, among other settings.

“Basically, what you do, is you have a dashboard to create your own stock-trading algorithms,” said Weiss. “Traditionally, you would have to do a whole lot of coding for this, and that’s exactly what the hedge funds do and investment firms do.”

Ayrro officially launched this month and is available both as a mobile app and on web browsers.

The app charges users a fee for one-time portfolio views of other users or when a user wants to copy and utilize another user’s algorithm. Its third subscription level is an invite-only, $54-a-month tier that allows those subscribers to split the aforementioned fees 50-50 with Ayrro.

Ayrro has about 100 users, of which about 20 have paid subscriptions.

Weiss also built a bit of gamesmanship into Ayrro. The app hands out digital badges and rankings on a leaderboard to reward its best traders. Those community features are intended to give users further incentive to use the platform.

“This aspect is a trend we’ve been seeing recently. There are a lot of users on Robinhood, or whatever brokerage they use, and they love to post about their earnings (on the internet),” Weiss said. “We’re trying to create that same environment within our own app by creating this leaderboard. We believe this will get users excited about the trades they’re executing on Ayrro.”

Weiss got the idea for Ayrro in 2019 as he got into stock picking while he worked as a web app coder and designer for Capital One.

“I really started looking into day trading. And that’s really how the whole idea for Ayrro started,” he said, adding that he saw an opportunity in closing the automation gap between individual traders and investment firms.

When stock trading became a more popular activity during the pandemic, Weiss quit his job and founded Weiss Capital, the company behind Ayrro, in April 2020. The company is a home-based business in Lakeside and Ayrro is its only product.

The app’s name is a reference to the word arrow, as in the upward direction of a price chart.

Looking forward, Weiss plans to expand the app’s user base. There are also plans to introduce cryptocurrency trading on the app.

For an investment of a different sort, locally-based Vint launched this month as an online service that allows users to buy shares in fine wine collections.

Another local app, Azzida, also launched in May as an online market place for odd jobs.

A portfolio is like a bar of soap. The more you handle it, the smaller it becomes.

I wish I could take credit.