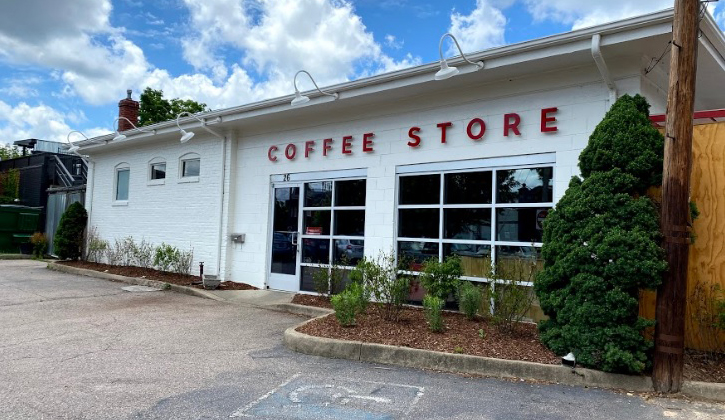 Looking to draw a crowd and celebrate his newest coffee shop, David Blanchard decided to open the spigot.

His staff served free coffee all day on May 30 for the opening of Blanchard’s Coffee Roasting Co.’s at 26 N. Morris St., in the former Fan home of Lamplighter Coffee Roasters. 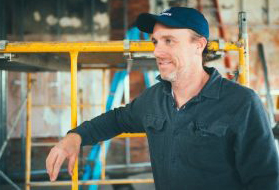 “We just wanted the neighborhood to be able to come out and be in the new space, so free always feels like the most generous thing to do. Nothing too complicated,” Blanchard said.

Blanchard’s took over the space last year, after Lamplighter closed its doors shortly after the pandemic hit.

“When the space became available we were immediately interested in it just because of the history of it,” Blanchard said. Prior to Lamplighter, the building housed Crossroads coffee shop.

“It had good memories for most of our staff when they were at VCU and I remember my wife and I went on dates there when we were in college,” Blanchard said.

The company was also looking for more square footage to expand its offerings. The 1,500-square-foot space has room for a kitchen to produce baked goods and a new level of focus on food than it had before at its other shops. Blanchard’s other locations are at 3112 W. Broad St. and 4930 Forest Hill Ave., the latter of which shares a space with The Veil Brewing Co.

Despite the copious amounts of free coffee gifted to customers upon opening, Blanchard said the shop turned a decent profit on day one through food and bulk coffee sales. 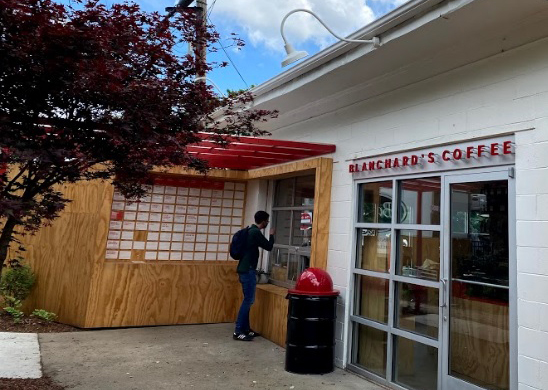 A customer walks up to order at Blanchard’s Coffee in the Fan. (Noah Daboul photo)

Over the next 90 days, Blanchard said, he expects to be making around 175 transactions a day at the new location, counting food, beverage and retail sales.

He’s also looking to sell groceries, with items like Blanchard’s coffee beans and grounds, baked goods and other local goods for sale.

Blanchard said it took about three months of mostly cosmetic work to get the building in order.

The company worked with Richmond architect Jessie Gemmer, who has designed other Blanchard’s locations throughout the city. The shop is decorated with bright red paint accenting the modern architecture that is consistent with the Blanchard’s brand. The patio space opens into Sydney Park in the Fan, giving patrons direct access to the park from the courtyard and food window.

I’m so excited to try it!

yeah! I don’t know why that location can’t keep a coffee shop, but here’s hoping the third time is the charm!

This is actually the fourth (at least) coffee shop at this location: WorldCup > CrossRoads > Lamplighter > Blanchard’s. All cool spots during their respective eras. Best of luck to Blanchard’s (love that Blanchard’s Blend).

What Chris said; And it might be limited visibility, very limited parking, and the fact that students are the main customers and they disappear for three or four months every year. (Summer and winter breaks). Best of luck.