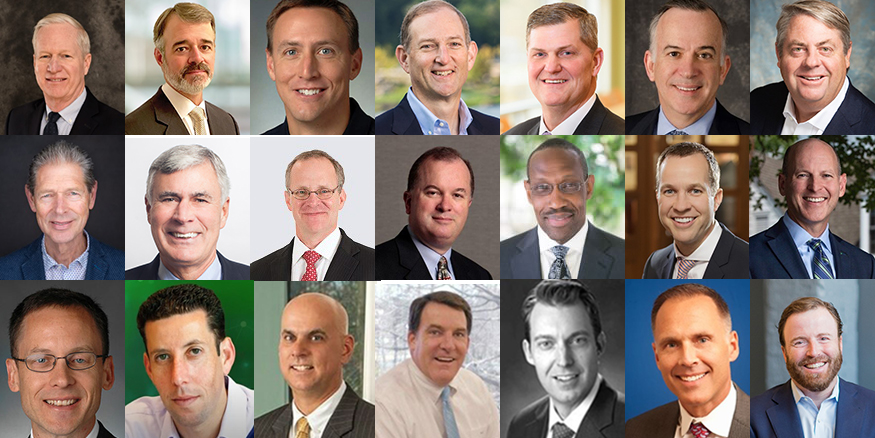 The CEOs of Richmond’s publicly traded companies. Headshots of some were not available at press time.

Editors’s note: This story has been updated to include the compensation data for Markel co-CEO Richard Whitt and LL Flooring CEO Charles Tyson.

While 2020 was a bear of a year in many ways, it turned out to be a decent 12-month run for the pay packages of most of the CEOs at Richmond’s publicly traded companies.

The average value of the total compensation doled out last year to the top executives at the region’s two dozen or so public companies was $4.68 million, up from $4.02 million in 2019, according to the recent proxy statements filed by each company with the Securities and Exchange Commission.

The average increase in compensation last year among those CEOs was 28.49 percent, the proxies showed. 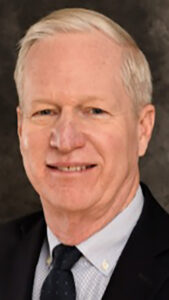 Tops among them for 2020 was Doug Pertz, CEO of Henrico-based armored car and money handling giant Brink’s.

Aside from the big batch of stock awards, Pertz’s base salary actually dropped by $74,000 from 2019, due to “temporary salary reductions imposed from April 9 through July 31, 2020 to mitigate liquidity risk caused by the COVID-19 pandemic.”

Second on the list is Billy Gifford, head of tobacco giant Altria. His total pay package for 2020 was valued at $12.23 million, up 30 percent from $9.37 million. His total, like Pertz, was fueled largely by stock awards of $5.7 million, incentive pay of $2.1 million and a $1.14 million base salary. That’s the largest base salary among local peers on the list.

Among the largest percent increases year-to-year was that of Bob Blue, who took over as CEO of Dominion Energy last year prior to the recent death of longtime head Tom Farrell.

Though the bulk of the executives saw their total pay head in a positive direction, it wasn’t all upside for everyone on the list.

Seven of the CEOs reported a decline in overall compensation, with the biggest drop felt by Thomas McInerney, head of Henrico-based insurer Genworth Financial.

Knight’s nearly 15 percent decline in compensation came as his industry was hit particularly hard by the pandemic, as hotels around the world saw occupancy rates drop precipitously for most of 2020 as the pandemic took hold.

Apple REIT adjusted Knight’s salary as a result, dropping it from $525,000 in 2019 to $493,000 in 2020. He also did not receive any 2020 non-equity incentive compensation, which is often one of the more lucrative cash payout categories for many public CEOs. That line item for Knight totaled more than a $1 million in 2019.

The disclosures filed by each firm also detail the perks offered to their top executives. Those can include the value of items such as an executive’s use of company cars and jets, country club dues, financial planning and executive health programs.

CarMax’s Bill Nash logged one of the higher amounts on the used car giant’s company jet compared to his peers, with his time onboard valued at $61,000.

Other figures of note include the inclusion on the list for the first time for Arie Kotler, CEO of convenience store operator ARKO. Kotler’s pay was made public for the first time as a result of ARKO becoming a public company during 2020 through SPAC deal.

Making their first appearance on the list are Charles Tyson, who was named CEO of Henrico-based LL Flooring in May 2020, and industrial metals company Synalloy CEO Christopher Hutter, who ascended to the firm’s top office on an interim basis in November of 2020.

While not on this year’s list because he’s no longer at the helm, Howard Willard, who retired as Altria’s chairman and CEO in April 2020, ended up as the highest compensated local public executive with a total haul of $17.83 million.

That included $500,000 in salary, $6.26 million in stock awards and a $8.77 million cash payment made in lieu of granting him outstanding stock awards he was owed from previous years and that he forfeited at retirement.

The reporting on this is missing key contextualization. It really ought to include data on average employee compensation – in other words, if you’re going to report that executive X received a 30% bump, you should also report what bump, if any, the average employee of that company received. Presenting both sets of data would paint a more accurate picture of the health of those companies than simply posting the local CEO scoreboard.

There’s a whole lot of diversity there