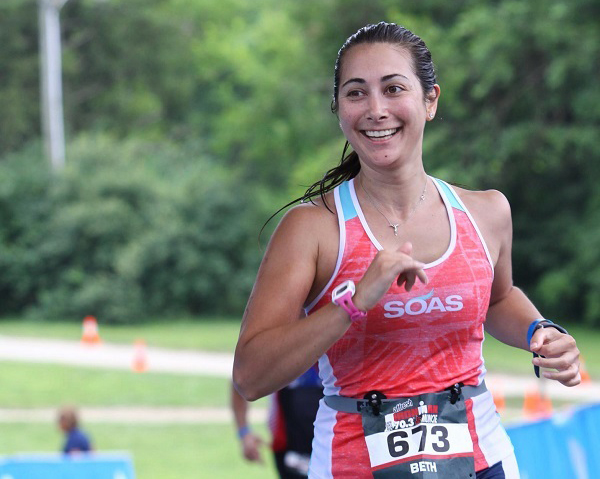 She’s not a Marvel superhero, but Beth Shivak can still call herself “Ironman.”

At 115 pounds and 5 feet 3 inches tall, the head of corporate communications at Atlantic Union Bank knows she might not come across as someone who’s completed an Ironman Triathlon — the single-day, 140.6-mile race that blends swimming, cycling and running.

As a matter of fact, she’s completed seven of them, as well as four Half Ironmans and many regular marathons, which she’s run in such locales as Paris, Rome and Jamaica.

“No one looks at me and is like, ‘Yep, that is an endurance athlete right there!’” Shivak said, laughing. “I just love to be able to do hard things. It’s not even the physical aspect. It’s the mental aspect of it, too.”

Shivak grew up playing basketball and volleyball and was a cheerleader in college before she started running half marathons about a decade ago. A friend who was training for an Ironman put the race on her radar, but Shivak said it took a while for her to warm up to the idea. 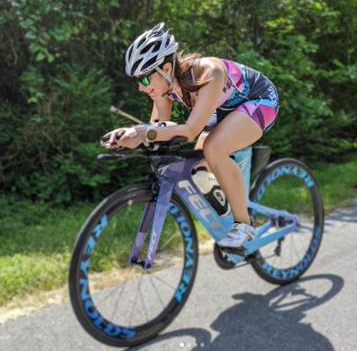 Shivak competing in the cycling stage of a triathlon.

“At that time, I hadn’t even run my first full marathon, so even contemplating doing that – swimming 2.4 miles, biking 112, running 26.2 – that just seemed so far out of the realm of possibility,” she said.

A few years later, while volunteering for an Ironman with her friend in Hawaii, Shivak decided: “I think I can do this.”

That was despite her reservations about swimming in open water — the first part of the 17-hour challenge that she said still gives her chills. The swimming isn’t the problem, she said. It’s the crowd of competitors all starting at the same time, and the motion sickness she experiences in open water.

“I am scared to death every time before I start a race. You’re standing there on the edge and you’re just looking into that water, and you know that if you get tired or you cramp or you get knocked in the head, you can’t stop swimming. You just have to keep going,” she said.

“I can swim all day long in the pool. It is a mental challenge to get into open water. I’m the most proud of being able to get through the swim portion of that race, because it’s terrifying for me.” 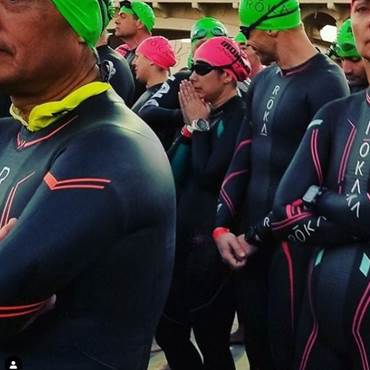 Shivak, in the pink cap and goggles, shows her nerves before a swim beside her boyfriend, Frode Anderson.

Before COVID-19 canceled events around the world, Shivak said she was averaging about one or two a year. One of her latest Ironmans was in New Zealand in 2019, and she’s currently training for her next one this September in Cambridge, Maryland.

While she trains year-round, Shivak said she puts in about 20 hours a week when she’s preparing for an Ironman and schedules workouts around her day job.

She said entry fees are upward of $800, and then there are the costs of travel and lodging plus investments in a bike and equipment. Shivak rides a Felt bike, which she’s personalized and equipped with electronic gear shifters.

These days, Shivak trains and competes with her boyfriend Frode Anderson, who she met in a triathlon training club when they both lived in Cleveland. Originally from Norway, Anderson has helped Shivak stay motivated and in shape through the pandemic, coming up with training challenges when he’s not working as an IT team lead at ColonialWebb, a mechanical contracting firm.

“Over the years, it’s been something to experience together, and to push each other when one isn’t feeling good,” Shivak said. “He’s quite faster than I am, and we’ll meet each other on the course and we’re like, ‘Keep going, you can do it, don’t stop, I’ll see you at the finish line.’”

The pair moved to Richmond when Shivak took a job with Atlantic Union as corporate communications director in 2017. She was promoted last year to a senior vice president position, leading a team of three in handling internal and external communications for the Richmond-based bank. 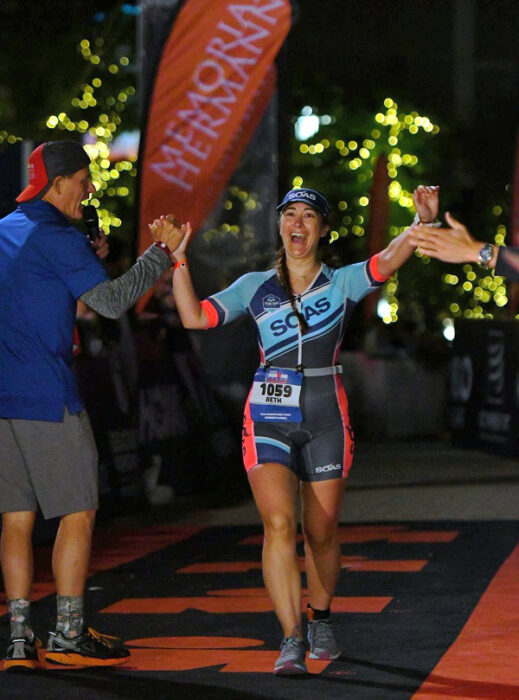 Shivak at the finish line of a race.

When she was applying for the job, Shivak said her accomplishments outside of work kept her confident through her interview.

“If I can mentally focus for a seven-hour workout, and get through it when I’m tired and grinding away on the bike and it’s hard, I take that same dedication and apply it to my work, because I’m that same exact person in the workplace,” Shivak said. “I really try not to ever let anybody down, and I approach my work with the same kind of dedication and intensity that I do in my training.”

While upholding her title as an Ironman triathlete comes with physical challenges and financial costs, Shivak said it’s the mental part of it that she takes the most away from.

“For me, it’s more about that inward motivation. It’s a long day of suffering,” she said.

“People say, ‘Beth, you spend a lot of time and money to do something that puts you through so much pain.’ But I like to do hard things,” she said. “I like to do things that makes a person say, ‘Wow, that’s crazy,’ because I was that person back before I started.”

This is the latest installment in our Downtime series, which focuses on business people’s pursuits outside of the office. If you, a coworker or someone you know around town has a unique way of passing time off the clock, and getting through the pandemic, submit suggestions to [email protected] For previous installments of Downtime, click here.