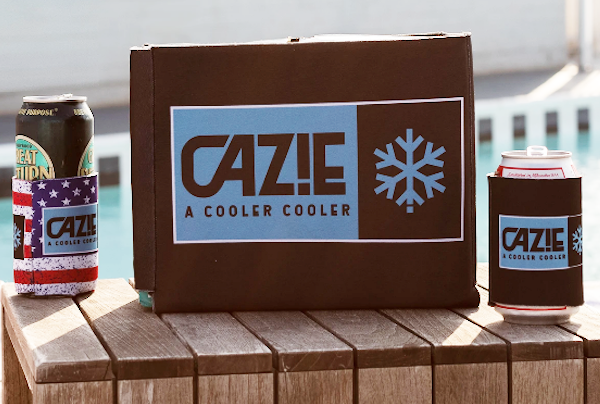 There are koozies for your beer can and there are coolers for your 12-packs.

“I said it out loud to a bunch of people as a joke, ‘Why not have a koozie for your case?’” Curran said.

The Richmond entrepreneur answered his own question with the recent launch of Cazie Cooler, which makes koozie-like insulated coverings for packs of beer.

It’s the latest venture from Curran, who is also CEO of local sportswear company XII Brands.

Made from the same sort of scuba foam fabric used for koozies, Cazie coverings fit around a case of beer in the same way cans fit into koozies.

While the Cazie coverings don’t have the same cooling power as ice chests, Curran is hoping to find an audience looking for a lighter and more portable alternative to keep drinks cool for a beach day or cookout.

The company currently only offers 12-pack beer case coverings but has plans for 24-pack, seltzer 12-pack and coverings sized for individual cans and bottles.

Curran said the company plans to sell the products primarily through its website, though efforts are underway to get the coolers into retail stores. Box coverings range from $15 to $20, while coverings for individual drinks run $5 to $6.

“I was able to get everything lined up and decided we had to launch quickly since it’s a summer thing,” Curran said. “Our big focus is e-commerce through the website but we have partnered with stores and we’re looking to get into more retailers.”

By summer’s end, Curran hopes to have his coolers in a dozen or so stores across the country. The company doesn’t currently have plans for its own brick-and-mortar retail space.

Locally, the company’s products can be bought at Shields Market in the Fan. The coolers are expected to be available in a couple stores in Cape Charles in the coming days.

The idea first occurred to Curran a couple years ago, but it was only in recent months that he sat down with some fabric and sewed a test run of the box covering.

The coverings are designed and sewn in-house in XII Brands’ Northside building and it rents the sportswear company’s equipment to make its products.

The launch of Cazie Cooler comes a little over a year after Curran weighed an entry into medical scrubs production as a means to get through the pandemic. The concept was put on the backburner when XII’s sportswear orders bounced back faster than expected.

“If we had maybe another two or three weeks of nothing happening, I think we could have finalized everything,” Curran said of the scrubs venture.

XII Brands is the parent company of VII Apparel Co., a rebrand of the company’s original name, Savage Apparel Co., which relocated to Richmond in 2015. XII Brands was formed when Savage and West Coast-based Five Ultimate merged in early 2020.

Curran said business has largely bounced back from the depths of the pandemic and that the company is now up to 18 employees after cuts caused by the COVID downturn.

“Sports are back, which is huge. For the last two to three months we’ve pretty much been at capacity sales wise, production wise,” he said.

Free Idea: Go after the “Growler” market at craft breweries.