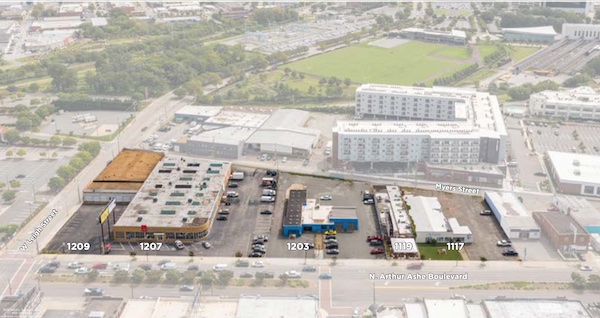 The 3.3-acre assemblage is on the east side of Arthur Ashe Boulevard. (BizSense file images)

A new high mark has been set for land on a per-acre basis in the Scott’s Addition area.

The buying entities are tied to D.C.-based Level 2 Development and SJG Properties, who are planning a major mixed-use project for the site. The seller in the deal was local investor Ed Lacy, who’d owned many of the parcels for decades.

At about $3.8 million per acre, the deal marks the highest sales price on a per-acre basis in the neighborhood in recent memory.

The previous high mark for the land in and around Scott’s Addition was $3.6 million per acre, set last year by South Carolina’s Greystar when it bought a whole city block at 1601 Roseneath Road. It paid $8.6 million for the site, where it’s planning a 350-unit mixed-use project with locally-based Capital Square. 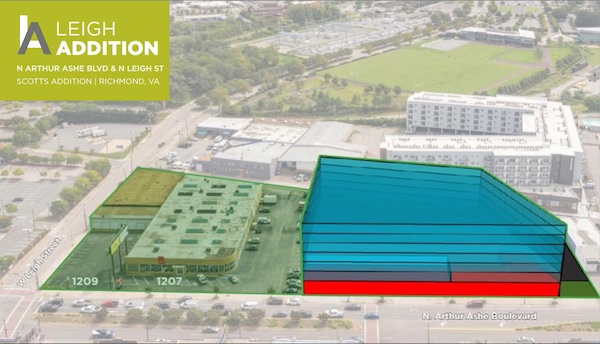 Early renderings show a roughly seven-story building with 100,000 square feet of space rising along the eastern side of North Arthur Ashe Boulevard.

The transaction closed July 12, the same day Level 2 and SJG Properties formally announced their plans for the site,which include 300 apartments and 14,000 square feet of retail space in a new-construction building at 1117, 1119 and 1203 N. Arthur Ashe Blvd.

Groundbreaking is expected to take place in August 2022.

In the recent past, we’ve heard that money is fleeing the city, that changing the name to Arthur Ashe Blvd would kill investment, that Antifa would run out all the developers, that taking down the monuments has caused people to leave… yet here we are at $3.8 Million per acre for the old Car Pool.

Exactly, Sean, and the developer closed without site plan approval acknowledging in its projected construction start up date that he’ll hold the land for 15 plus months before the City can provide a building permit. I know I continue to harp on the long delays at CIty Hall but there are more permits submitted to the City than Henrico and yet they have half the staff to handle the load. The City has promised for years that they’d rectify that situation, freeing up about $15Million in annual tax revenue to satisfy the Mayor’s ambitious desire to spend money. More apartments… Read more »