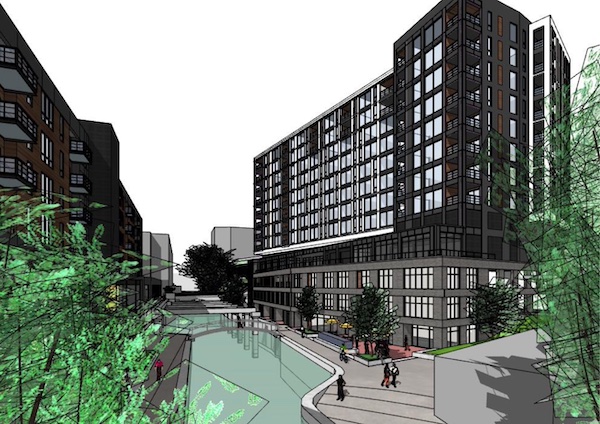 At 12 stories, Locks Building 7 would rise where an AC Hotel by Marriott was once planned. (City documents)

The Locks development is entering its final stage.

WVS Cos. and Fountainhead Real Estate Development have filed plans for two new buildings at 1300 E. Byrd St. to cap off the nearly decade-long redevelopment of the old Reynolds North complex along downtown’s canal front.

Fountainhead President Tom Papa confirmed the plans, which he said would mark the final phase of the Locks.

“Locks Buildings 7 and 8 are truly the last piece of the canal and they’re sort of the last remnants of the industrial past of that area,” Papa said.

Fountainhead and WVS have been working on the Locks since 2012, when the pair spent $35 million on the 7-acre former Reynolds site. The frequent collaborators have developed land on both the north and south side of the James River, including projects like South Falls in Manchester and the Locks Tower just to the east of Riverfront Plaza.

Locks Building 7 would replace a 22,000-square-foot warehouse that’s currently on the site, though Papa said they’re planning to incorporate some remnants of it in the new 207,000-square-foot building.

“We spent a lot of time talking about this. We’re going to leave some of the columns and the girders from the old building there just to kind of show what was there,” Papa said.

Of Building 7’s 138 apartments, 97 would be one-bedroom units, 39 would be two-bedrooms and two would be three-bedrooms. Eleven stories of apartments would sit on top of 5,400 square feet of ground commercial space and four levels of podium-style parking. 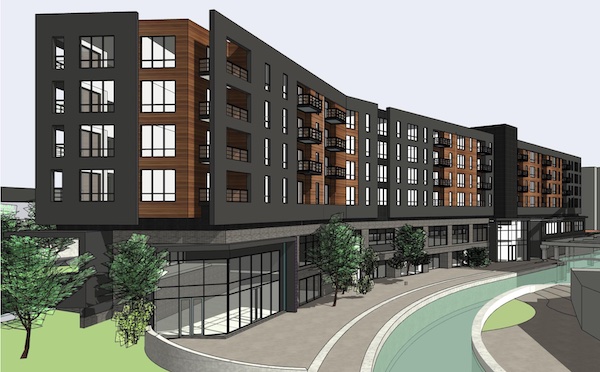 Locks Building 8 would rise on the south side of the Kanawha Canal.

South of the canal, Building 8 would be shorter and less dense but would have a larger commercial space at 8,600 square feet and more parking spaces with 180.

One hundred of Building 8’s apartments would be one-bedroom units, and the remaining 20 would be two-bedrooms.

Timmons Group is the project’s engineer and Walter Parks Architects is its designer. Papa said a general contractor hasn’t been finalized but that KBS Inc. has been a consultant.

The land’s zoning, B-4 Central Business district, gives WVS and Fountainhead the necessary entitlements to construct the new buildings. Lory Markham of Markham Planning is representing the developers in the planning process.

Papa said it’s too soon to estimate a project budget or timeline.

Two different hotels were formerly eyed for the sites where Locks Buildings 7 and 8 are now planned.

In 2019, KM Hotels planned an eight-story, 150-room AC Hotel by Marriott on the Building 8 site and had part of the parcel under contract. Papa said that contract expired and the plans have been scrapped. 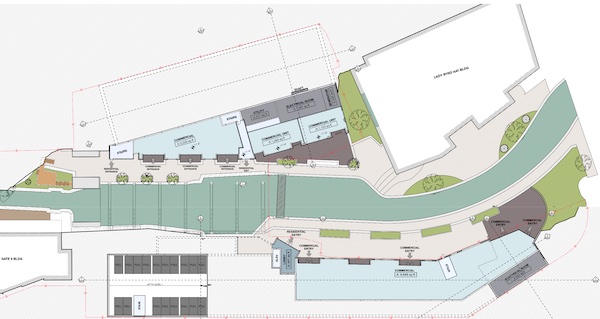 Interstate 95 runs just north of where Locks Building 7 is being planned.

Local developer Charles Macfarlane had Locks Building 7’s site north of the canal under contract in 2016, where he was planning a similarly-sized Hyatt Place hotel. Those plans were ultimately derailed by a dispute over an alleyway between entities tied to WVS and Fountainhead and local developer Margaret Freund’s Fulton Hill Properties.

Freund owns the Lady Byrd Hat factory building at 140 Virginia St., which is adjacent to WVS and Fountainhead’s land.

Papa said plans for Locks Building 7 aren’t dependent on access to the alley.

Last year, the City of Richmond purchased a slice of land on the western end of canal walk from WVS and Fountainhead. As part of the Locks Tower, the developers improved the canal front land with things like planters, lights, irrigation systems and sidewalks and sold the finished product to the city for $1.8 million.

Papa said they’re planning to see if a similar deal could be struck for Locks Buildings 7 and 8.

“We’re going to take one short run at seeing if the city wants to work with us on doing other things along the canal. If they don’t, then we won’t pursue that.”

To date, The Locks has added over 500 apartments across five buildings near the canal, as well as Casa del Barco restaurant.

This plan looks great and I hope the city will work with them on the canal walk improvements too.

The image with the site plan says Interstate 95 runs north of building 7 and it should say Interstate 195.

Same here. The canal “entrance” at 12 Street (going east) is so poorly maintained, not ADA complaint and just interconnected. This design looks to enhance the canal to 12th Street and with some city cooperation maybe the walk between the two canal will not longer be so disconnected at the Newport Cross. And long term maybe this will give enough synergy that the old Power Plant site might see some movement finally.

would be great to see a variety of condominium options incorporated into the new developments that are popping up all over town in addition to affordable housing which Richmond desperately needs according to multiple sources. It’s not too late to learn from west coast cities that missed the mark.

It would be great to see a variety of condominium options incorporated into the new developments that are popping up all over town in addition to affordable housing which Richmond desperately needs according to multiple sources. It’s not too late to learn from west coast cities that missed the mark.

Beautiful development – it will frame that section of the canal splendidly. I can’t wait for it to get underway and am eager to see how it looks when complete. So glad to see there will be even more vitality of residents living right along the canal.

Question: In the story, Locks 7 is listed at 12 stories – but the architect’s rendering shows it at 13 floors. I hope we get that extra floor to give the building a little more height and visibility along the riverfront.

Peter, I see (bottom to top) 3 + 1 + 8. Am I missing something? BTW, kudos to the architects. They do great work in the area. In worked with one of the partners as far back as the ’80s on projects in Innsbrook and Moorefield.

Matt – I’m counting 3 + 2 + 8 looking at the nearest part of the right side of the building (close to the near corner) – counting the second row of windows from the bottom to include the balconies above. I might be missing something where there’s not a floor where there appears to be one – but it looks like 13 to me. Perhaps it’s 12 stories for the majority of the building with that far eastern-most side with an additional floor?

Thanks. I do see where that might be confusing.

The developer needs to include adding lock gates to the two existing canal locks and linking the canal to the Haxall Canal to open it up to canal boat tours.