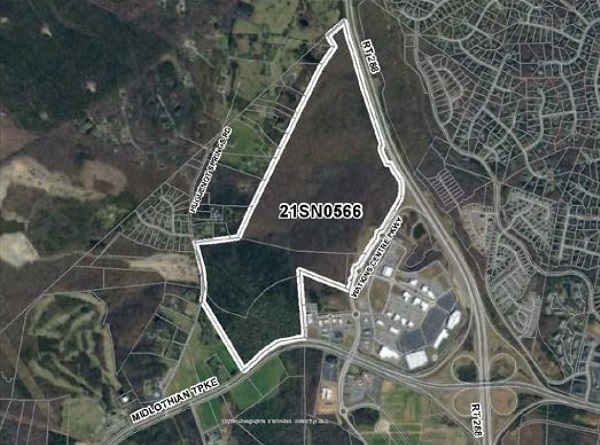 The Aire at Westchester is a proposed mixed-use district that would feature more than 2,000 residential units on 300-plus acres west of Westchester Commons. (BizSense file)

Chesterfield to vote on 2,000-home project beside Westchester Commons

The Chesterfield County Board of Supervisors is scheduled to meet Wednesday. Full agenda here.

On the 6 p.m. meeting agenda is a rezoning request by HHHunt Communities for The Aire at Westchester, a mixed-use project that would include more than 2,000 residential units west of Westchester Commons.

The board is scheduled to hold a public hearing on a transfer of up to $20 million to the economic development authority for land acquisitions. Most of those funds would go toward the purchase of Spring Rock Green shopping center, which county officials envision converting into a mixed-use development.

Also on deck is a rezoning request by Emerson Ventures LLC to pave the way for a convenience store with attached restaurant and gas pumps at 210 E. Hundred Road in the Bermuda District.

The Chesterfield County Planning Commission voted last week to recommend approval of a rezoning request tied to the proposed Oasis Park development that would feature up to 475 residential units on about 60 acres.

Oasis Park would be built along Cosby Road, Fox Club Parkway, Millwood School Lane and Village Square Parkway in the Matoaca District. The proposal now goes before the Board of Supervisors for final approval.

The Planning Commission also decided last week to defer its consideration of a proposal by HHHunt Communities to add 500 more residential units in an expansion of Charter Colony. The commission is slated to revisit the proposal in September.

At its meeting last week, the Richmond Planning Commission recommended approval of a special-use permit for a 126-unit apartment building that Thalhimer Realty Partners and property owner John Freeland are planning at 1508 Belleville St. in Scott’s Addition.

The commission approved an intent declaration for the city to rezone a portion of the Richmond Ambulance Authority property at 2400 Hermitage Road from industrial to TOD-1 Transit-Oriented Nodal District. The rezoning would allow the 0.17-acre portion to be incorporated into a mixed-use development planned for the Cobb Lumber site beside it.

The commission deferred to Sept. 7 a vote on a special use request for a planned mixed-use conversion of a duplex at 3101-3105 E. Marshall St. in Church Hill. Planning staff supported the request, which has received about a dozen letters of opposition.

Henrico County is inviting residents to share their vision for public services, growth, economic development, and other needs and priorities as it prepares to update its comprehensive plan for the next 20 years.

The planning department is launching HenricoNext, a process to create a cohesive, countywide vision for Henrico in 2045. To begin shaping that vision, residents are encouraged to provide feedback on a host of issues ahead of community meetings that will be scheduled this or next year. Comments may be submitted at henriconext.us.

Targeted for completion in 2024, the updated plan is expected to cover the same topics addressed in the last update, which was adopted in 2009. This next update also will include a focus on pedestrian and bicycle facilities.