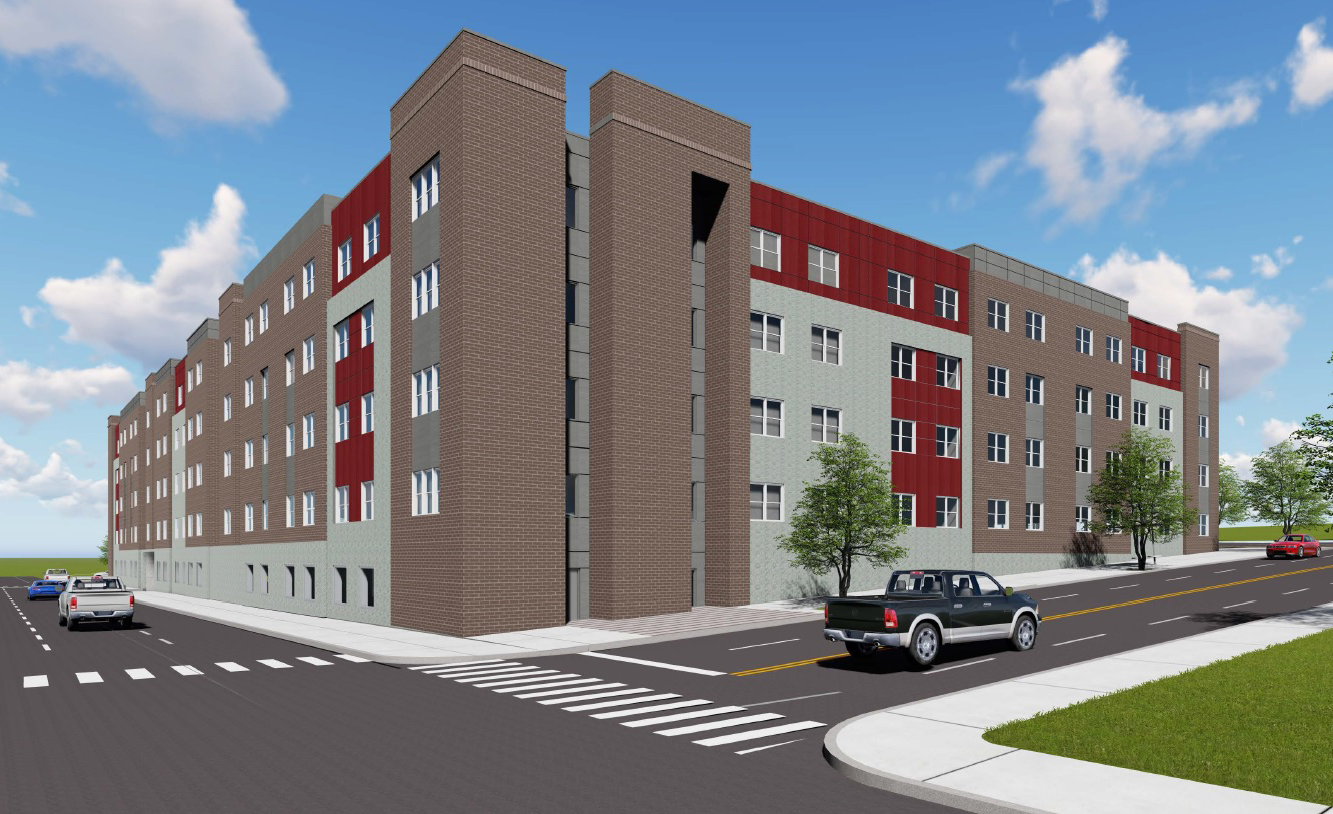 A rendering shows the Manchester apartments as they would appear at Hull Street and Commerce Road. (Courtesy of The Lawson Cos.)

With two projects under its belt and two more on the way, a Virginia Beach-based developer is doubling its local workload to add more lower-income housing in Richmond — including at a prominent intersection in Manchester.

The Lawson Cos. recently filed development plans for two income-based apartment projects in the city: a 116-unit building at the southeast corner of Hull Street and Commerce Road in Manchester, and a 144-unit complex at 700 W. 44th St., south of Forest Hill. 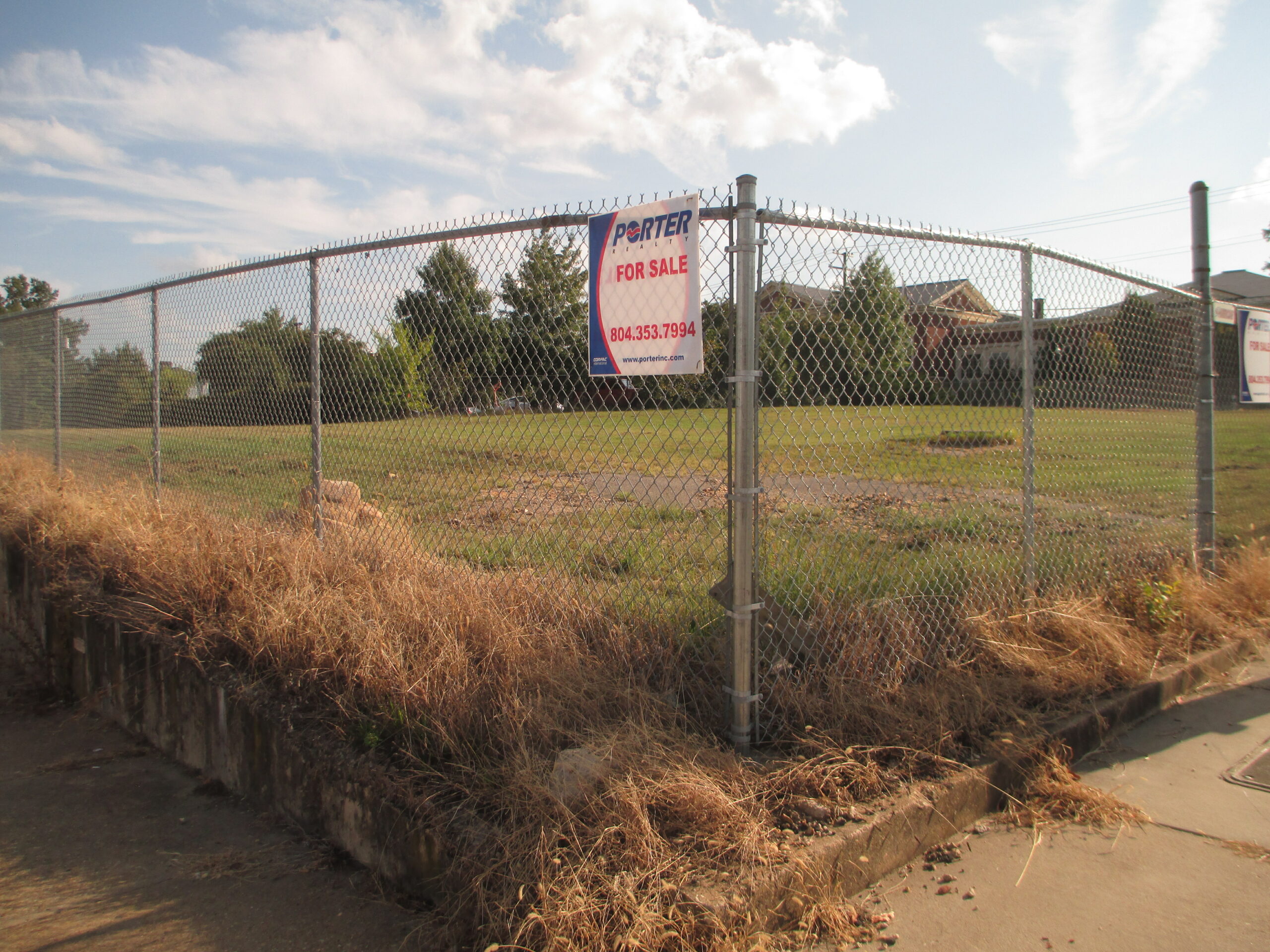 The property at the corner of Hull Street and Commerce Road. (Jonathan Spiers photo)

Both developments would consist entirely of income-based units, with the Manchester units reserved for renters earning at or below 60 percent of the area median income – $37,800 for an individual, or $54,000 for a family of four, according to the U.S. Department of Housing and Urban Development.

Household income requirements for the 44th Street complex have yet to be established, said Dan Hankin, a spokesman for Lawson. Both projects would be funded in part using low-income housing tax credits (LIHTC). Project cost estimates were not provided.

The projects are in line with two other developments that Lawson has been behind in recent years: the 200-unit Foundry Apartments under construction along the interstate near Virginia Union University, and the 96-unit Alexander at 1090 Apartments the firm built at 1090 German School Road in South Richmond.

Hankin said response to the Alexander apartments encouraged the firm to increase its activity in Richmond. He said the company has sold off all properties it owned outside Virginia and is now fully focused on housing developments in the state.

“Quality rental housing is in great demand in Richmond. Alexander at 1090 has been well received and we’re excited to be able to serve more Richmond residents in need of affordable housing with The Foundry and these planned developments,” Hankin said in an email. “We see Richmond as a perfect area for growth.”

Lawson has both sites under contract. Brokers involved include Porter Realty’s Richard Porter and Clifford Porter for the Manchester site, and a One South Commercial team led by Ryan Rilee for 44th Street. 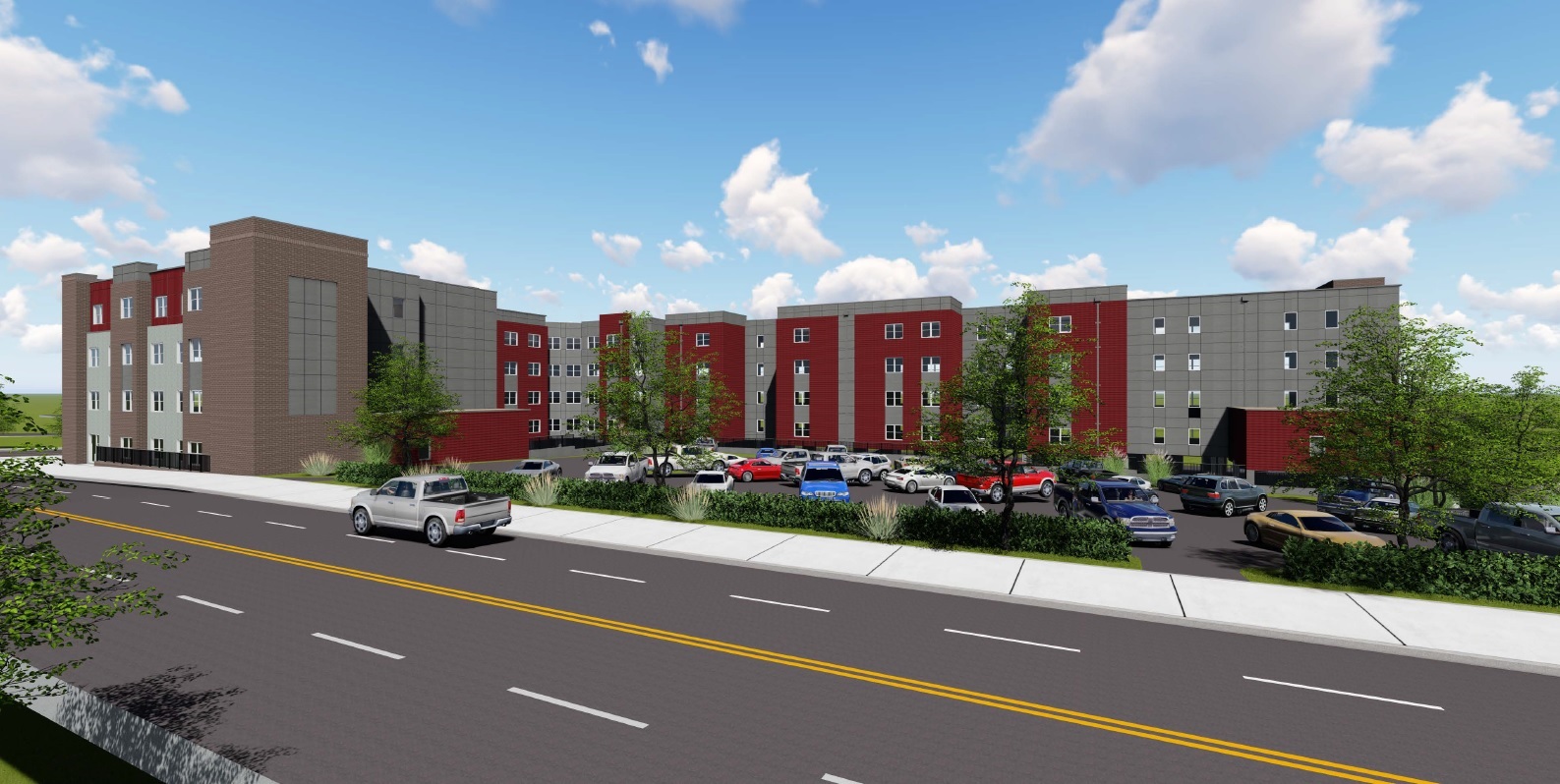 A northward view of the proposed Manchester apartment building from across Ninth Street. The existing courthouse parking lot also is shown. (Courtesy of The Lawson Cos.)

City property records show the Manchester site is owned by The J.M. Fry Co., a locally-based printing inks manufacturer. Consisting of four parcels totaling just under an acre, the vacant property – at 812 Hull St., 6 E. Ninth St., and 811 and 812 Decatur St. – has been in the company’s ownership since 1969 and most recently was assessed by the city at $540,000.

While the Manchester site fronts a prominent intersection in the fast-developing and increasingly mixed-use neighborhood, Lawson’s proposed building there would consist solely of apartments, without any street-facing storefronts or other uses.

Hankin said the company determined that the market and the neighborhood would be best served with low-income housing. He also said the site’s sloped topography presented challenges to incorporating other uses in the development.

“Given the LIHTC use and the difficult topography the site presents along Hull Street, it was not feasible to incorporate a retail or commercial component on the ground floor,” Hankin said. “However, we believe the residential apartments along Hull and Ninth Street will complement the continued growth of the Hull Street corridor.” 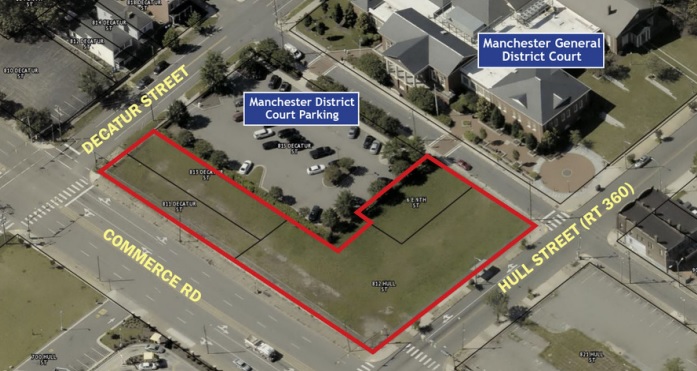 An aerial of the site at Hull Street and Commerce Road. (Courtesy of Porter Realty)

The four-story building — five stories facing Commerce — would form an L-shape fronting Commerce and Hull, with four levels of apartments above a partially underground parking garage. The rest of the city block consists of a city-owned parking lot that serves the Manchester General District Court building across Ninth Street.

The building’s parking garage would be accessed off Commerce and total 118 spaces, with six short-term and 29 long-term spaces for bicycles.

The apartments would range from 390 to about 950 square feet and consist of eight studios, 81 one-bedroom units and 27 two-bedrooms. Anticipated rents are $830 to $1,065 a month, depending on unit type and resident income. Planned amenities include a top-floor clubroom, fitness center, bike storage and a bus stop on site. 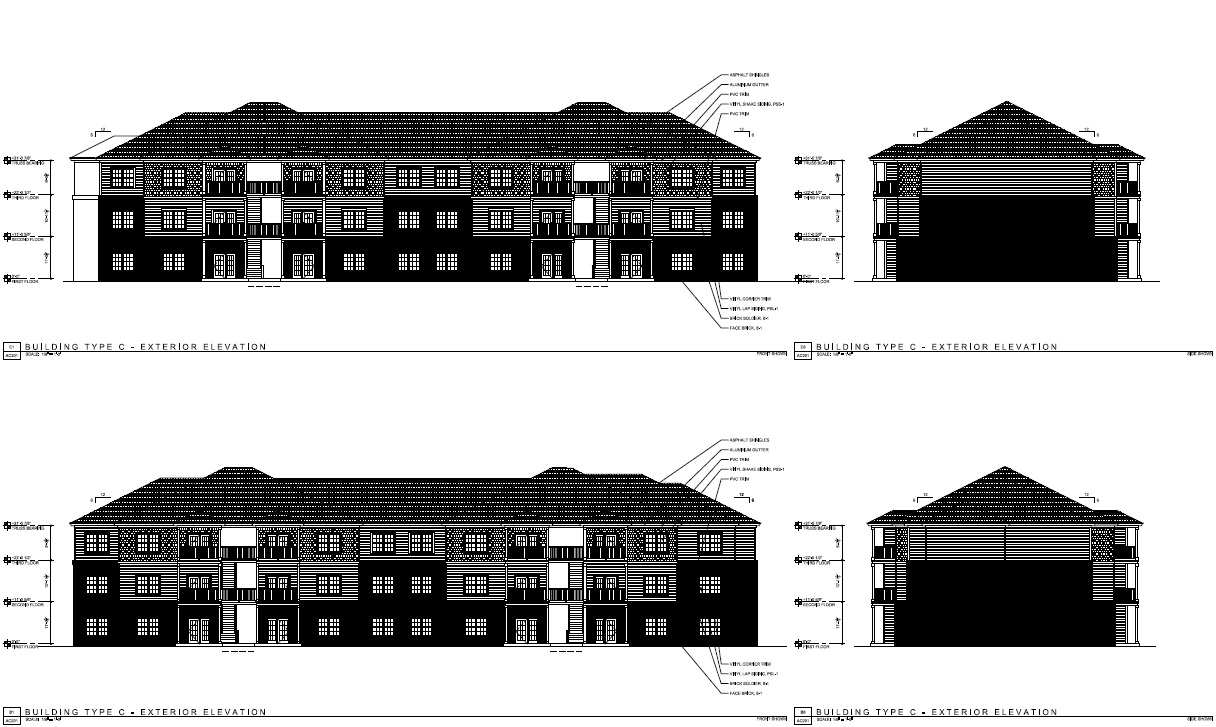 Elevations of the three-story buildings planned for the 44th Street apartments. (Images courtesy City of Richmond)

The 44th Street complex would consist of six three-story buildings, with 24 units in each. Unit sizes and rental rates were not released, as Hankin said they are pending the project’s approval.

The complex would include a 3,700-square-foot clubhouse with a business center, a 1,300-square-foot maintenance building and 256 parking spaces, as well as six short-term and 36 long-term bicycle spaces. 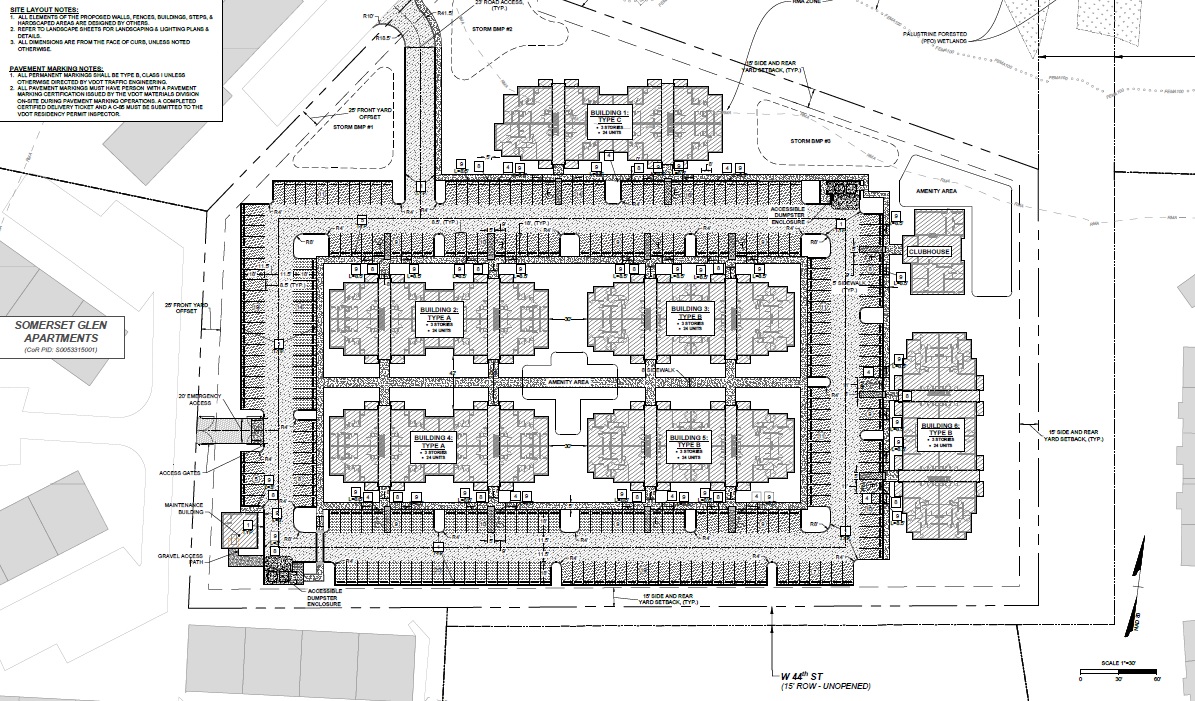 The 44th Street complex would consist of six apartment buildings and a clubhouse.

Access to the site would be off West 46th Street across from the Ashton Square Apartments along Westover Hills Boulevard, with an emergency access connecting to the next-door Somerset Glen apartment complex.

Virginia Beach-based TS3 Architects is designing both projects, and local firm Timmons Group is the engineer and landscape architect on both.

Pending approval by the city, Lawson is projecting to start construction on the Manchester building next summer with lease-up anticipated in mid-2023. A timeline for the 44th Street complex has not been determined.

As for The Foundry, Hankins said construction on those apartments is on schedule, and on track to start leasing toward the end of this year with initial residents moving in early next year. The four-building project, near School Street and Brook Road, is estimated at $40 million.

Excellent! Lawson is a terrific LIHTC builder and the city needs many more quality affordable units. I was pleased to sell them the land for The Alexander and they handled it beautifully. Congrats again to One South (they get a lot of those!) and Porter for working difficult transactions to the finish line.

Great news! I feel like the more variety of housing types would feel in the nearby commercial/ retail areas with employees making this area more walkable /city like.

Send it back to the drawing board. That is a lazy attempt and creates a dead-zone between the “Lower” and “Downtown” Manchester. Just because it’s affordable units doesn’t mean it has to be void of any street interaction.

I coulda agree, developments like these should be in the middle of prominent blocks.

Why aren’t there any 3 bedroom apartments? Many families I know who are currently struggling with rent, have 3 bedrooms or more. Is there going to be 3 bedrooms?

Your answer is in your comment. People struggling with the rent are iffy customers, and three bedrooms are not as profitable to rent out as one or two if the price doesn’t make up the difference.

These rents are still to high for some of the population and doesn’t solve homelessness for that population. There’s all ages of people with disabilities and the elderly that are in desperate need of independent apartment housing. And in that income bracket they even need two bedroom apartments or more to have the option to include children to help keep families together and grandparents who are having to raise there grandchildren. How can anyone afford even a rent of $800+ a month say if there pension/disability check is $1,065 a month. They can’t when maximum gross income for food stamps… Read more »

“We see Richmond as a perfect area for growth.” Specifically certain PARTS of Richmond and the Richmond Metro in general. I have said for years that Manchester will be the area that growth will explode and the Broad Street region will be where the coolest stuff will eventually happen. Well, I was certainly correct about Manchester. So far, my crystal ball has not been proven on Broad — I just saw a Pulse bus on Friday during rush hour EMPTY and a homeless looking guy asleep alone on the stop at the Science Museum. I am almost ready to declare… Read more »

One more thing, less rambling — the more of these large residential things that go up, no matter the target audience, the more small businesses over there will be able to flourish if they target common needs like food, etc. I am pretty sure the Legend owners are pretty happy that there are now so many people who can WALK to their excellent patio instead of being a rather inconvienent afterthought, or non-thought “Hey…. it’s going to be a beautiful evening and I haven’t been to Legend in ages how about we go there tonight?” “Nah, too much hassle.” I… Read more »

my last comment wasn’t approved?? Oh well, I’ll try again. This is great news for our community! I’m so glad to see investors choosing to create more affordable housing options for our low income and working class neighbors- this should be top priority right now. Agree with the other comment that some 3-bedrooms would be a good thing to add. Overall, just so glad to see this.