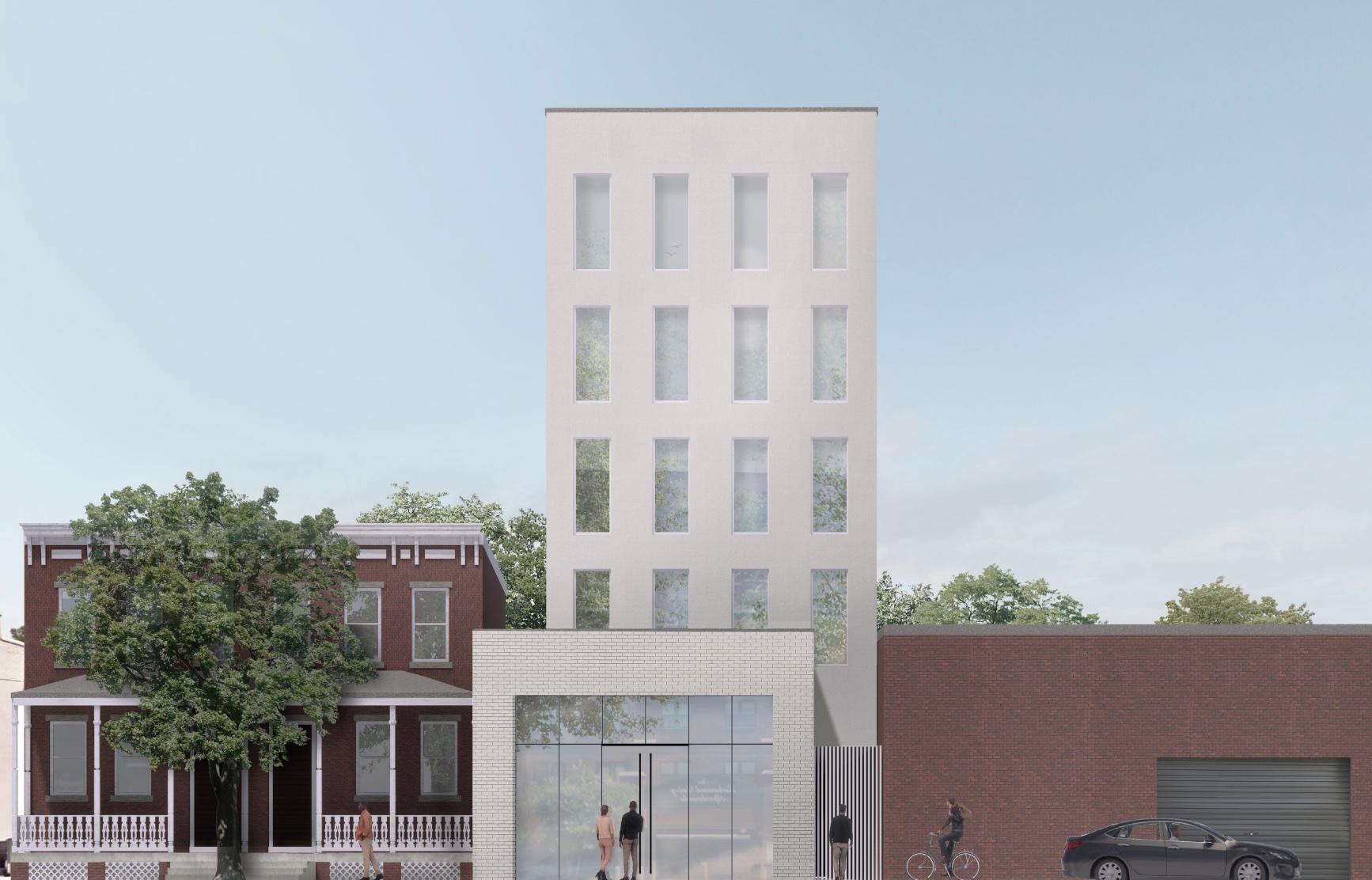 A rendering of the planned 13-unit building near Gallery5 in Jackson Ward. (Courtesy of city documents)

A five-story mixed-use building is being planned to replace a 50-year-old warehouse in Jackson Ward.

Over a dozen apartments plus commercial space would make up the new building at 210 W. Marshall St. It would rise across the street from the Richmond Dairy apartments and a few doors down from the recently-renovated Gallery5 building.

The property’s owner, Gerald F. Ragland Jr. of Alexandria, is seeking to raze the vacant, one-story warehouse. The new building, with 13 apartments above ground-floor commercial space, would go up in its place, city documents show.

Attorney Jennifer Mullen of Roth Jackson applied on Ragland’s behalf this fall for a special-use permit that would pave the way for the project. Mullen wasn’t available for comment by press time.

In the SUP application, Mullen writes that the project would be in accordance with recommendations in the city’s Richmond 300 master plan.

“This development promotes walkability and connectivity, which is also consistent with the future land use recommendation to increase density and promote engaging ground floor use,” Mullen writes, adding that the project would not include any off-street parking. 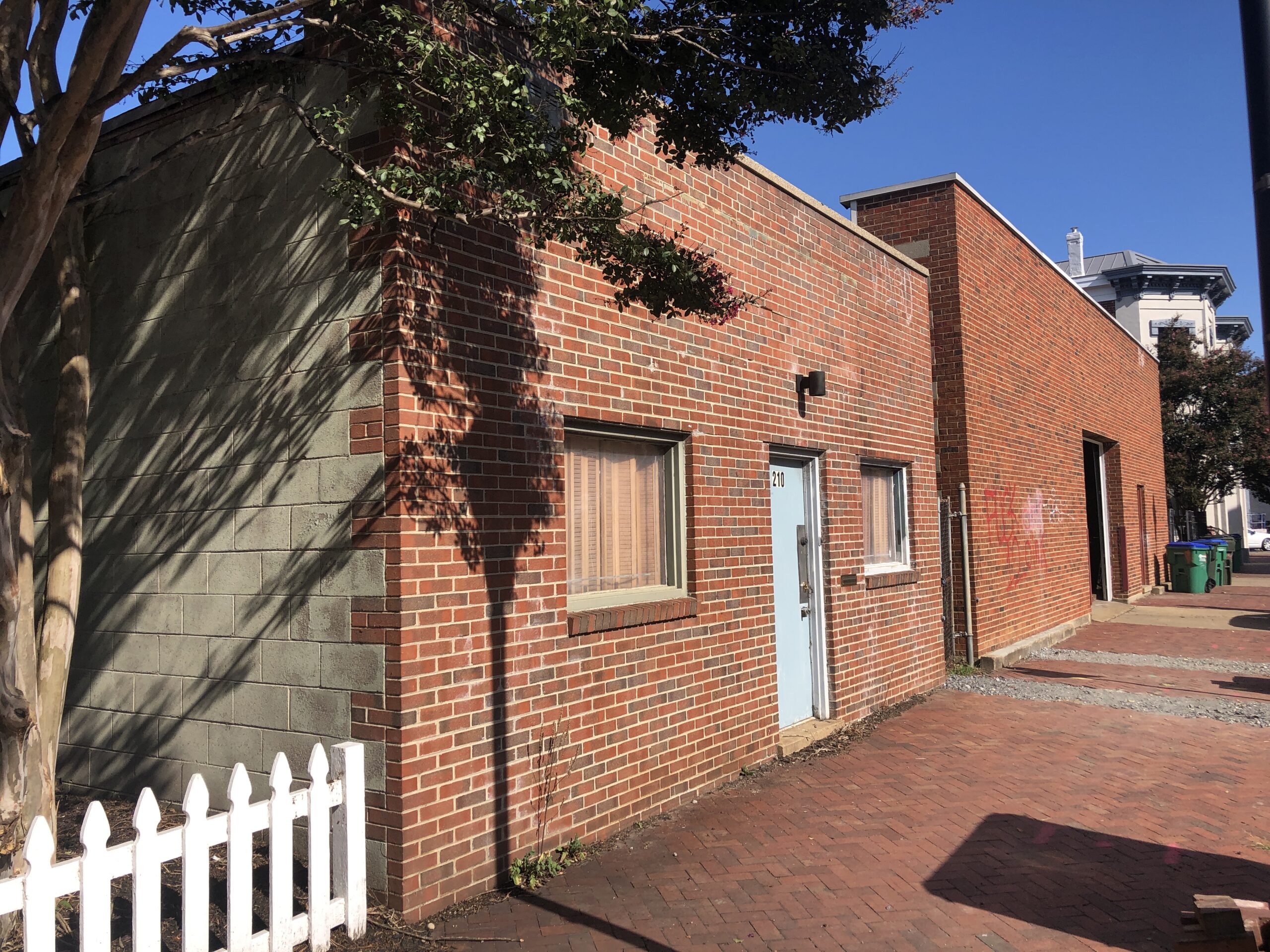 Preliminary plans for the project show that the building would total about 14,000 square feet, with about 1,000 of that as retail/gallery space on the ground floor.

The application also notes that, since the property is in the Jackson Ward Historic District, the new building’s design would require a Certificate of Appropriateness from the city’s Commission of Architectural Review before being built.

Architecturefirm, a local designer also based in Jackson Ward, is listed as the project’s architect.

The application was filed in late September. The case is not yet listed on a Planning Commission agenda.

A much higher-density project is in the works a few blocks east along Marshall Street.

Local development firm SNP Properties is working with Philadelphia’s Parkway Corp. on a 12-story mixed-use tower at 200 E. Marshall St. The 250-unit building is planned to rise on a current surface parking lot. Work has not yet begun on that project.

Here we go again,,, “Mullen writes, adding that the project would not include any off-street parking.” There is no way that this property will not add another 20 – 25 cars to that block. This on top of massive parking lost on both sides of Broad Street to the Pulse in the immediate area. Those who think this is a great idea would not live on the adjacent blocks in a million years.This will continue to erode the historic and residential area even more quickly.

At 1.5 cars per apartment this new building will add 20 vehicles that need parking spaces, in a neighborhood that already requires parking permits because of existing parking density issues. City leaders need to get serious about not only preserving current spaces but requiring new parking when developers build up.

This is actually an unpermitted block which is worse off because it’s absorbing overflow from a poorly thought out permitting scheme in which Jackson Ward took a ridiculous block-by-block approach to a larger neighborhood problem.I already have to park on this block sometimes because my 400 W Marshall block is likewise a legacy unpermitted block hosting the same parking distortion in that we are absorbing excess demand from the surrounding permitted blocks. Every other block adjacent is permitted to address facing residents only. If I can’t find a spot on my block I have a dwindling list of blocks to… Read more »

Certificate of Appropriateness for that design….what seems consistent with the character and design of the existing neighborhood. Concrete solid pre-fab walls or 5 story building. Council just passed resolution RES. 2021-R062 at the end of September to do a design overlay at the request of the neighborhood to prevent this type of project in the historic district.

I’d like to see some brickwork on the exterior of this building. There’s no need to “prevent” the project – but I will agree concrete pre-fab doesn’t fit that block (or most of the neighborhood) at all. I really like the project though – and the long, narrow footprint is very interesting and unique from a design standpoint for a building this size.

this building doesn’t bother me at all, it seems contextually appropriate. Much better than the usual Walter Parks “Box the building came in” approach

Parking issues aside, it’s a seemingly lovely building replacing a nondescript cinderblock and brick box. Better to build something elegant and modern than some half-baked facsimile of a 1900s row house.