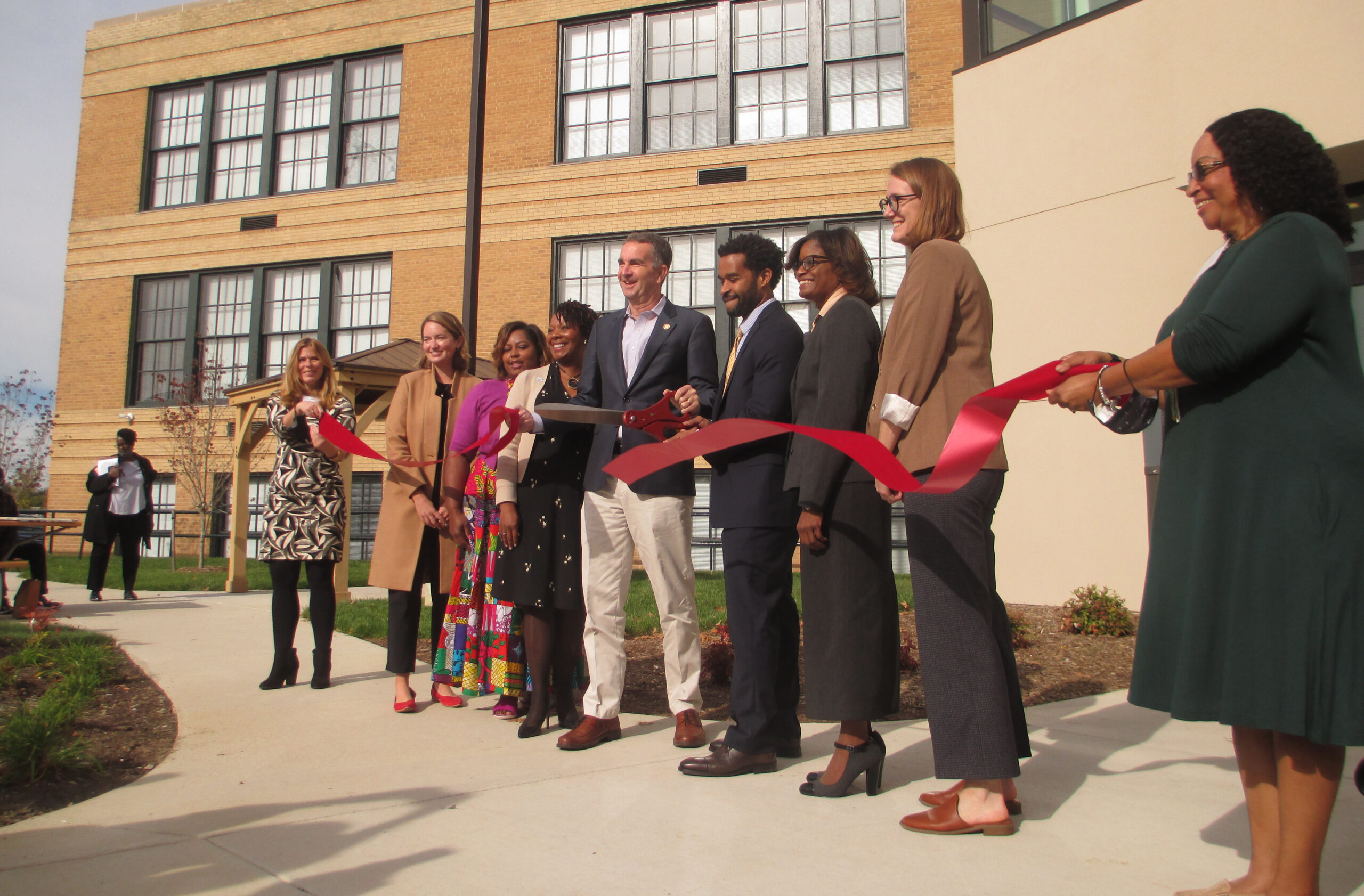 Gov. Ralph Northam, center, cuts the ribbon at a ceremony Thursday marking the completion of the Baker Senior Apartments. (Photos by Jonathan Spiers)

Sixty years ago, Robert Montgomery was a student at Baker Public School.

The 71-year-old was among dozens of low-income seniors who were moved into the new Baker Senior Apartments from the nearby Fay Towers in neighboring Gilpin Court.

The $15.8 million rehab and conversion of the former elementary school into 50 apartments is the last of a trio of projects by the Richmond Redevelopment & Housing Authority and Enterprise Community Development to provide replacement housing for residents of the towers, which RRHA is looking to redevelop as mixed-income housing.

Montgomery, who peeked out of his new residence Thursday as dignitaries including Gov. Ralph Northam toured one of the classroom-turned-apartments, was elated to tell his history with the building.

“I went to this school,” Montgomery told a reporter, going on to list the names of the principal and other administrators from his days at the school. 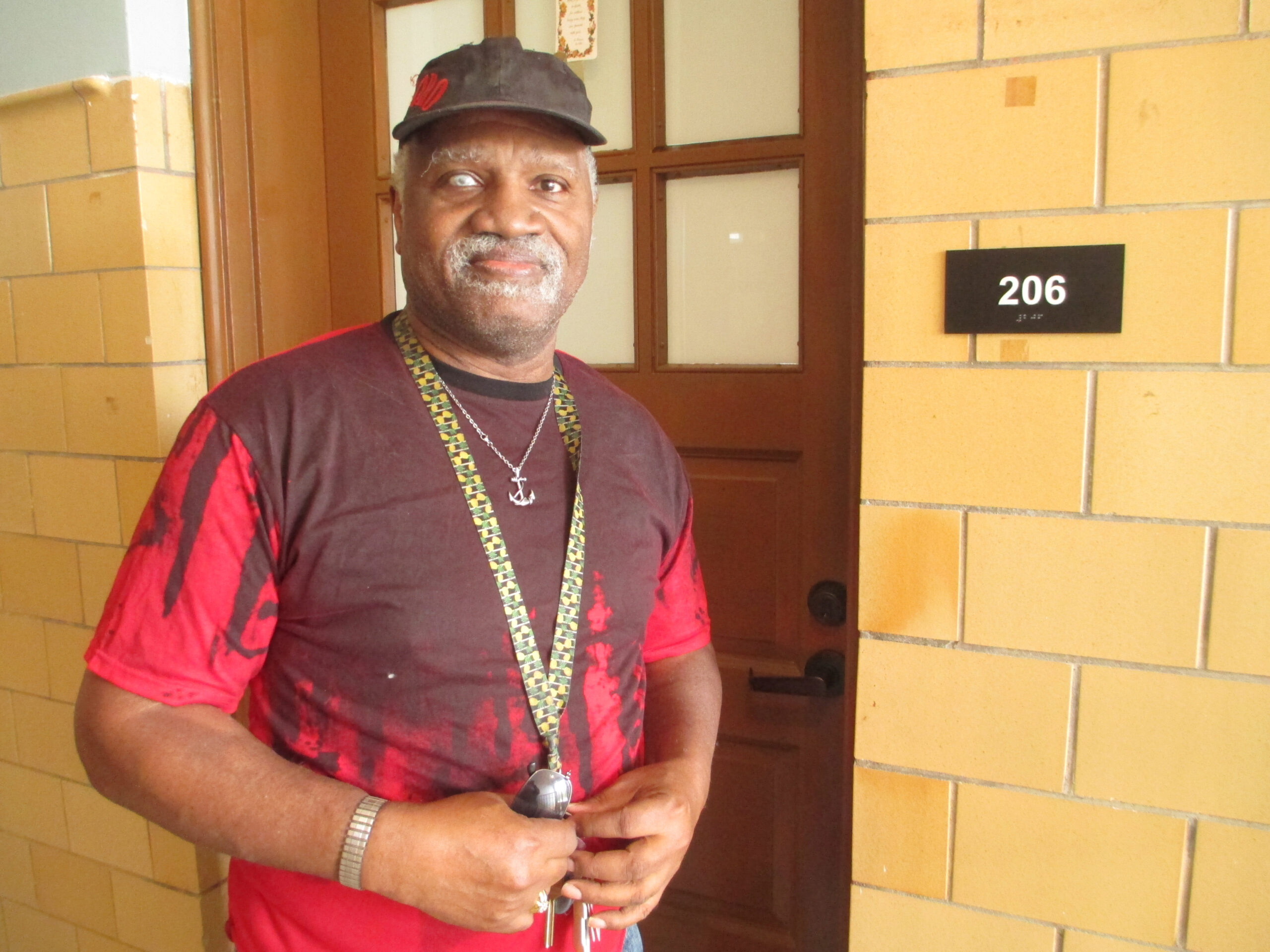 Robert Montgomery stands outside his apartment at Baker Senior Apartments. The 71-year-old was a student at Baker Public School in the early 1960s.

“It brings back memories of Baker School and that era,” he said. “Of all the schools that I’ve known that stood the test of time, Baker School has stood out from the rest. The school’s been here a long time, and you see what condition it’s in. It has taken its toll, but it’s still there. It’s amazing.”

Such history and pride of place and community were recurring themes during a ribbon-cutting ceremony Thursday morning, which marked the end to not only the Baker conversion but the three-project effort that’s been about a decade in the making.

The effort got started with the old Highland Park Public School in Richmond’s Northside, which Enterprise – then known as Community Preservation and Development Corp. – converted into 77 apartments for low-income seniors. That $11.4 million project wrapped up in late 2016. 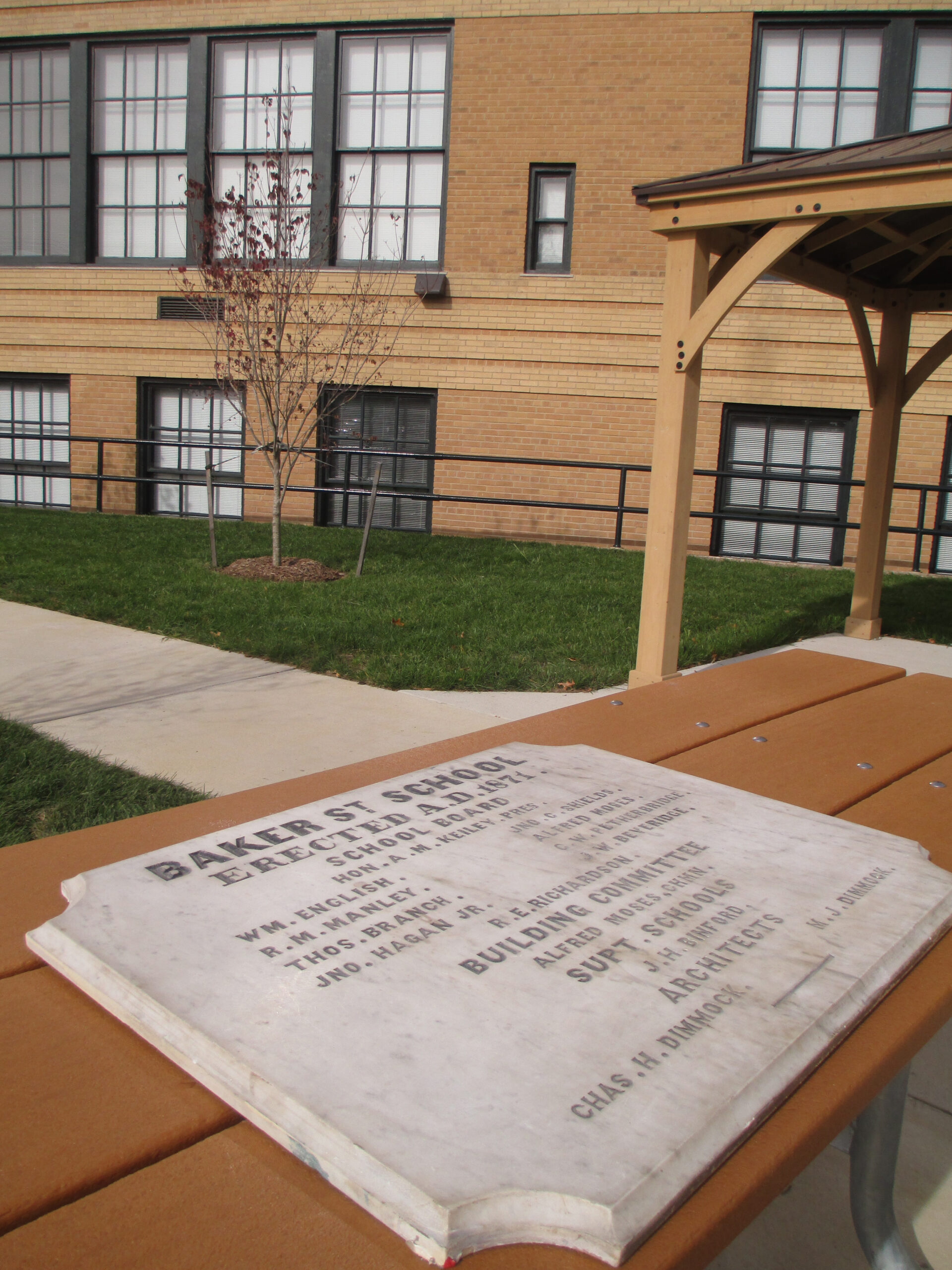 The original school’s construction plaque from 1871 was on display at the ceremony. The existing structure was built in 1939.

Next up was The Rosa and Van de Vyver apartments, a $30 million mixed-income, mixed-use development in Jackson Ward that includes 72 homes for low-income seniors and 82 mixed-income units, 36 of those designated for workforce housing.

The $30 million development, across the interstate from the Baker apartments site, was completed last year.

And now, with the completion of Baker at 100 W. Baker St., a total of 200 residents have been moved out of the aging Fay Towers and into newly created and improved accommodations – at Baker, complete with chalkboards preserved from the classrooms.

“This community is better off with this project,” Northam said in his remarks at the ceremony. “A community is healthier when its housing is safe and when it’s affordable.”

The Baker project, like the others, leveraged low-income housing tax credits, state and federal historic rehabilitation tax credits, and tax credit equity through a variety of sources.

The project also involves the U.S. Department of Housing and Urban Development’s Rental Assistance Demonstration program. The RRHA is using the same program, called RAD for short, for renovations of 11 of its subsidized housing properties elsewhere in the city, five of which got underway in recent months. 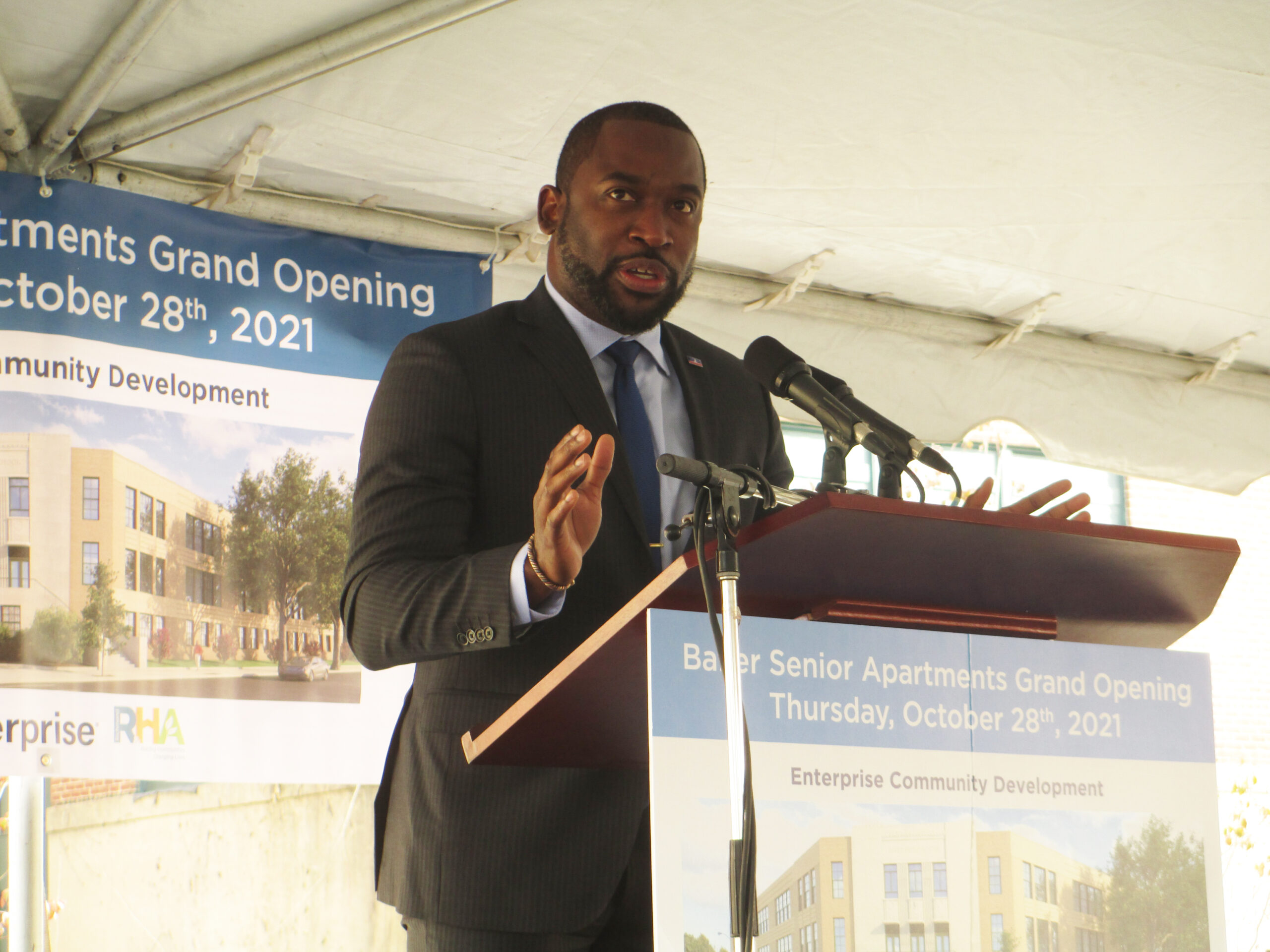 Richmond Mayor Levar Stoney noted those projects, as well as others in the vicinity of Baker, including local developer River City Ventures’ $4 million conversion of the nearby St. Luke Building into 14 market-rate apartments. He also noted The Rosa and Van de Vyver apartments within view across the interstate.

Construction of the interstate in the late 1950s cut a swath through the historically black Jackson Ward neighborhood, cutting off the Baker school and surrounding area from what in its heyday was described as the “Harlem of the South.” A concept to reconnect the two sections, via a block-wide bridge deck across the interstate, is being floated by city planners.

Jackson Ward also was one of three Black Wall Streets – along with Tulsa, Oklahoma, and Durham, North Carolina – noted Brian McLaughlin, president of Enterprise’s community development division president. Speaking over the noise of interstate traffic whizzing by, McLaughlin emphasized that Baker is one of several steps in a larger effort to rebuild and reconnect Jackson Ward. 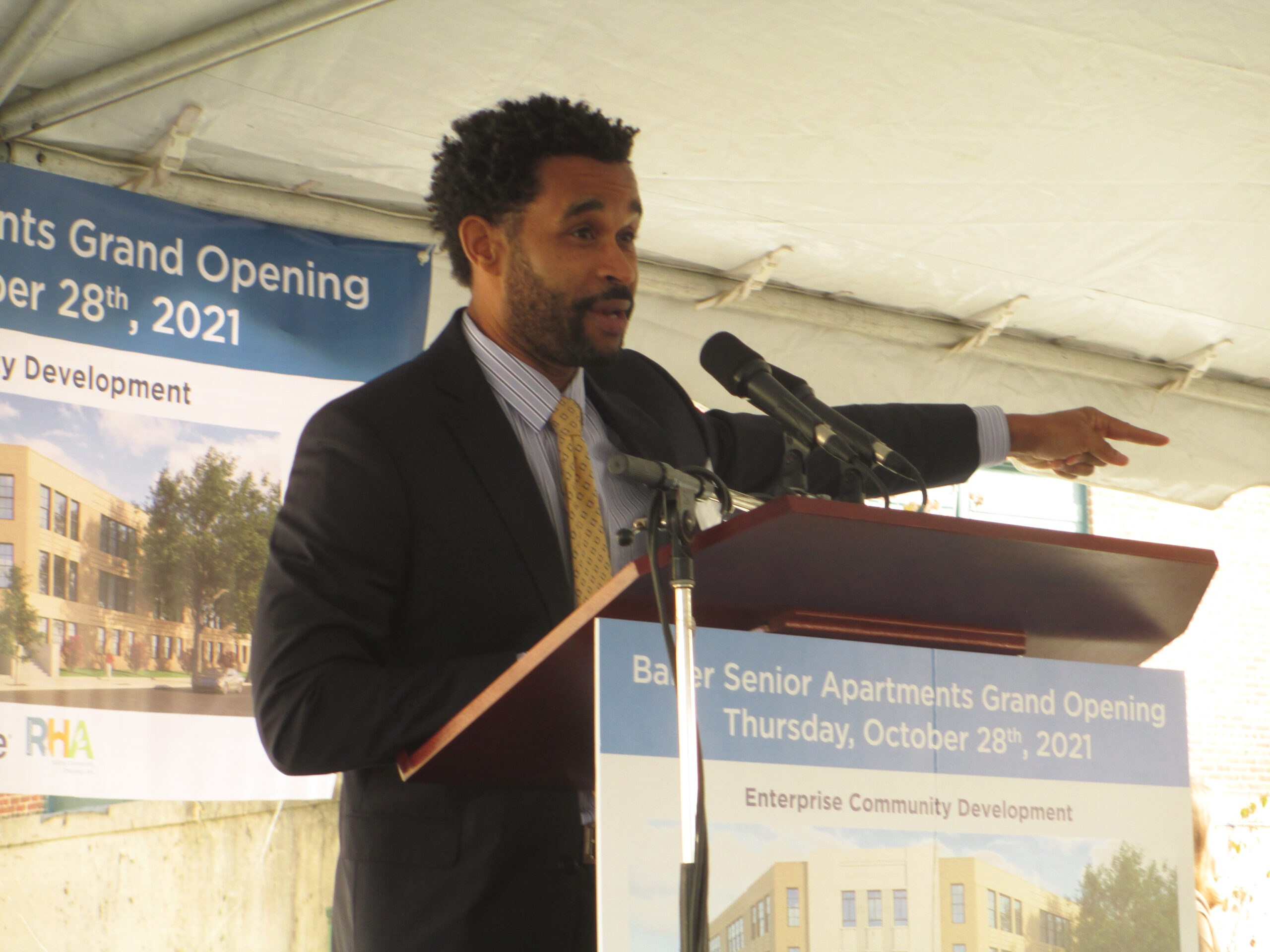 Enterprise Community Development’s Brian McLaughlin spoke about Jackson Ward’s history as a place of pride for the community.

“This was, as we’ve talked about thematically, a place of pride,” McLaughlin said. “It was where freed slaves and northern black soldiers settled to create a life and a home for themselves. It’s changed: the highway didn’t help, the concentration of public housing as a policy decision nearby didn’t help. But we’re not going to go back. Today’s not a moment to look behind, it’s a moment to look ahead.”

Presenting some schoolbooks that were found inside the school, which was built in 1939 and closed in 1979, McLaughlin said, “They’re all empty, and what’s fascinating is that the story that was going to be written hasn’t been written. But I love that we’re writing it now.”

The apartments feature quartz countertops, hardwood floors and large windows, and amenities include on-site parking, business and fitness centers and resident services. The school’s gymnasium-auditorium was repurposed into a multipurpose room with a catering kitchen for community events.

Hamel Builders was the contractor on the project, and Commonwealth Architects was the designer. Determined by Design was the interior designer, and S.L. Nusbaum Realty Co. is handling property management.