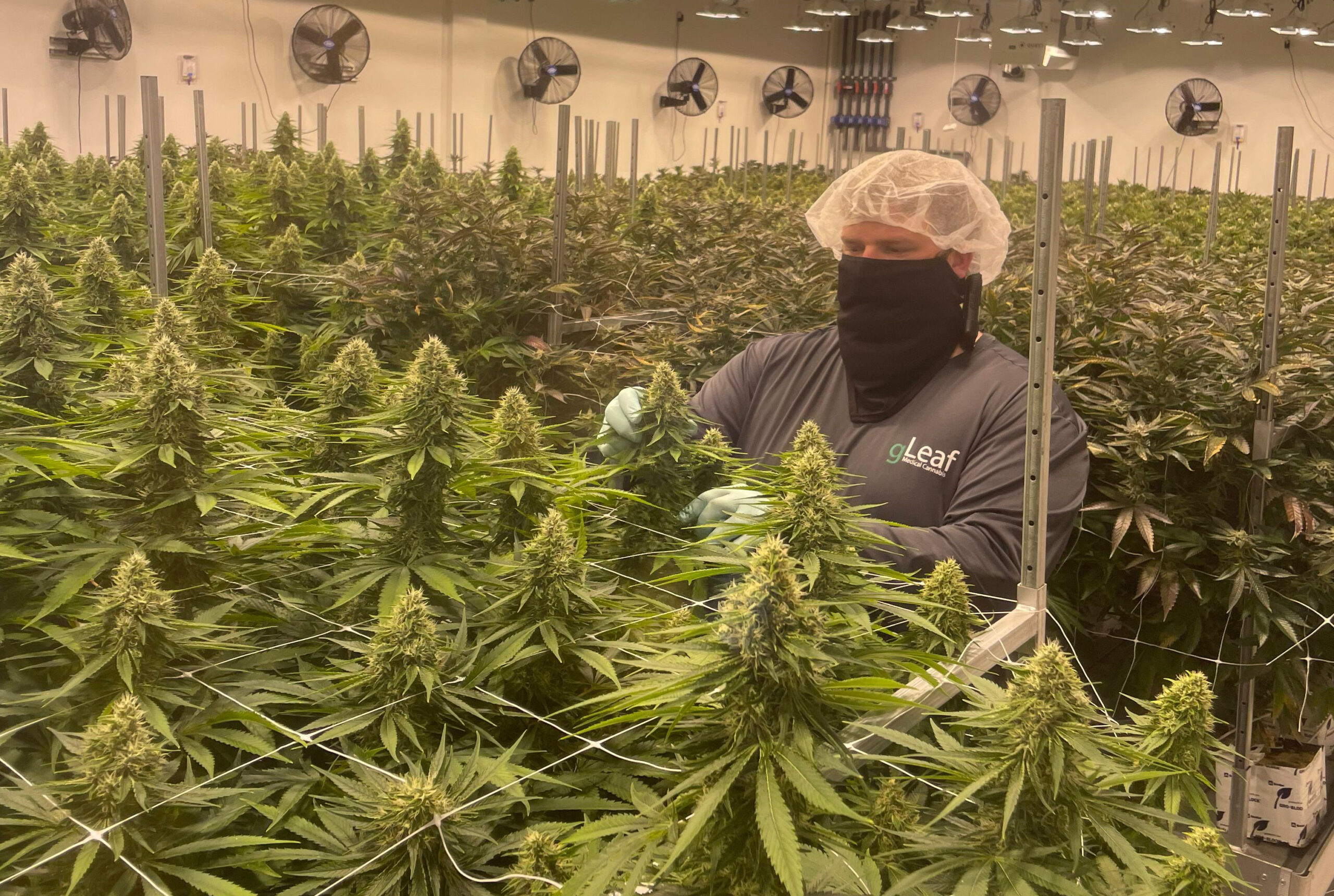 The Richmond area’s first and only medical cannabis operator has opened an outpost in Short Pump, the latest of several new or upcoming marijuana dispensaries popping up around the state.

It’s the latest sign of the state’s nascent and ever-evolving marijuana industry and comes about a year after the first sales of medical cannabis in Virginia.

Medical cannabis sales kicked off in October 2020 with the opening of Dharma Pharmaceuticals’ dispensary and growing facility in Bristol. The other three state-licensed cannabis pharmaceutical processors followed suit with the opening of their own dispensary-and-growing facilities later that year, including Green Leaf’s sprawling 125-employee facility on Richmond’s Southside.

A year in, Green Leaf and its competitors still have plenty of room to grow their brick-and-mortar footprints. As they map out their dispensaries, the operators look toward the future recreational marijuana market.

The fledgling medical sales side of the industry has experienced steady volume in Virginia thus far, but still has a ways to grow. 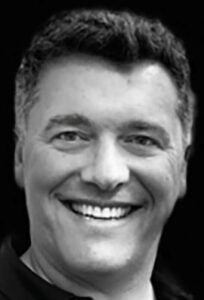 Green Leaf President Phil Goldberg said the state’s patient base has been slow to develop, something he attributed to restrictions on advertising imposed on medical cannabis operators such as a ban on billboard displays.

“We have a ways to go, we have to get the word out,” Goldberg said in late October. “I definitely see the lack of advertising as part of the reason we don’t have 60,000, 80,000 patients (statewide) at this point.”

In Green Leaf’s experience in other states, medical cannabis programs tend to attract about 2.5 percent of the state’s population. Virginia could one day have more than 200,000 registered patients, in Goldberg’s estimation.

Despite that, Goldberg and representatives of the state’s other medical cannabis operators said they’ve experienced steady sales since they began their dispensary operations in Virginia, particularly since the rollout of marijuana flower and joint sales in September.

Columbia Care, which has the state license to operate in eastern Virginia, has seen 10 percent sales growth month-over-month since its start. That growth has more recently been closer to 20 percent with the launch of flower products, the company’s Virginia director of operations and pharmacist-in-charge Ray Hernandez said in late October.

The company opened its 65,000-square-foot dispensing and growing facility in Portsmouth in December and has about 30 employees. 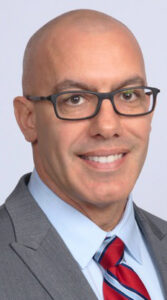 Dispensaries offer a range of cannabis products, from marijuana flower buds and vape cartridges to tinctures and edibles. Some operators reported that smokable products, particularly marijuana flower, appear to be the most popular choices among patients.

“From what I can tell, it’s probably flower, pre-rolls and vape cartridges that make up about 70 percent of products dispensed,” Hernandez said.

In southwest Virginia, patients’ interest in different products appears to be more evenly spread, according to Shanna Berry, a co-founder of regional operator Dharma Pharmaceuticals.

In Virginia there is a limit of five medical cannabis pharmaceutical processor licenses, one for each of the state’s health service areas. Each license holder is allowed a single growing-processing-dispensary facility, the only location in which a license-holding entity can grow cannabis. They’re also allowed up to five standalone dispensary-only satellite locations.

License holders are required to develop the products they sell in Virginia from cannabis grown in-state.

In addition to Dharma, Green Leaf and Columbia Care, the state’s medical cannabis roster is rounded out by Jushi Holdings, which operates in the Northern Virginia suburbs of Washington, D.C. Columbia Care owns Green Leaf, following an acquisition in June.

The remaining health service area, encompassing other parts of Northern Virginia and the Shenandoah Valley, doesn’t currently have an active medical cannabis operator. That license is mired in a legal dispute between the state’s Board of Pharmacy, which regulates the commonwealth’s medical cannabis program, and cannabis company PharmaCann.

The board revoked PharmaCann’s conditional approval for a permit and denied its application. The board says that revocation occurred because PharmaCann hadn’t built a cannabis processing facility in the time allotted by the approval process.

PharmaCann has appealed the decision and the case is currently playing out in Henrico County Circuit Court. If the judge were to rule against PharmaCann’s appeal, a new application process could begin, but not until the matter is fully resolved, the Board of Pharmacy spokeswoman said. 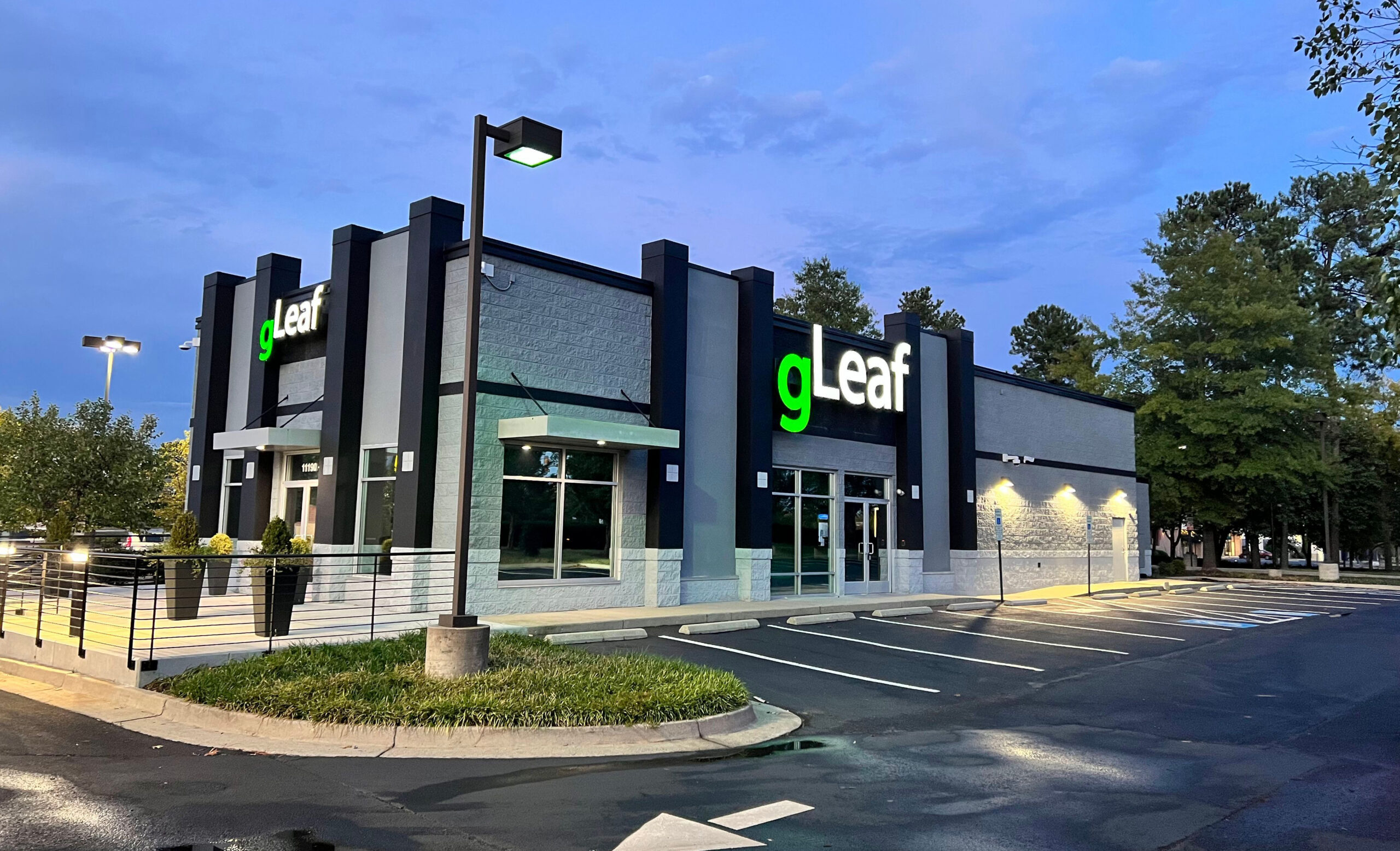 Green Leaf opened its dispensary that’s part of its 82,000-square-foot Manchester processing and cultivation facility last November. The company has teed up a second satellite dispensary in Carytown, which hasn’t yet opened.

The company invested $600,000 in the buildout for its Short Pump dispensary and expects to spend $500,000 on its Carytown dispensary in the former storefront of Need Supply.

The company is also looking at Ashland and Colonial Heights for future dispensaries, though it hasn’t settled on a storefront yet in either area. The company prioritizes buildings with drive-thrus, such as former banks or fast food restaurants, for dispensaries.

As it continues to line up dispensaries, Green Leaf continues to invest in delivery services. It recently added five more vehicles, creating a fleet of 18 to 20 vehicles.

While operators are required to locate their satellite dispensaries in their respective health service areas, delivery service has no such limitation and represents an avenue to reach more patients. The company is doing about 3,000 deliveries monthly for its own operations.

Green Leaf vehicles also deliver on behalf of Columbia Care in Virginia, though Columbia Care plans to launch its own delivery service by mid-2022.

“Delivery comes with a whole slew of headaches and logistics and added expense,” Goldberg said. “However, it’s what patients want. It’s what everyone wants.”

Columbia Care plans to open its first satellite dispensary near the Virginia Beach oceanfront before the end of the year, said Hernandez, the company’s Virginia operations director.

Hernandez said 35 percent of its Virginia patients come from Virginia Beach, which made it a priority for expansion.

The Peninsula is likely to be the site of Columbia Care’s third dispensary, he said, saying Williamsburg, Newport News and Hampton are all under consideration. It expects to eventually have two dispensaries on the Peninsula. 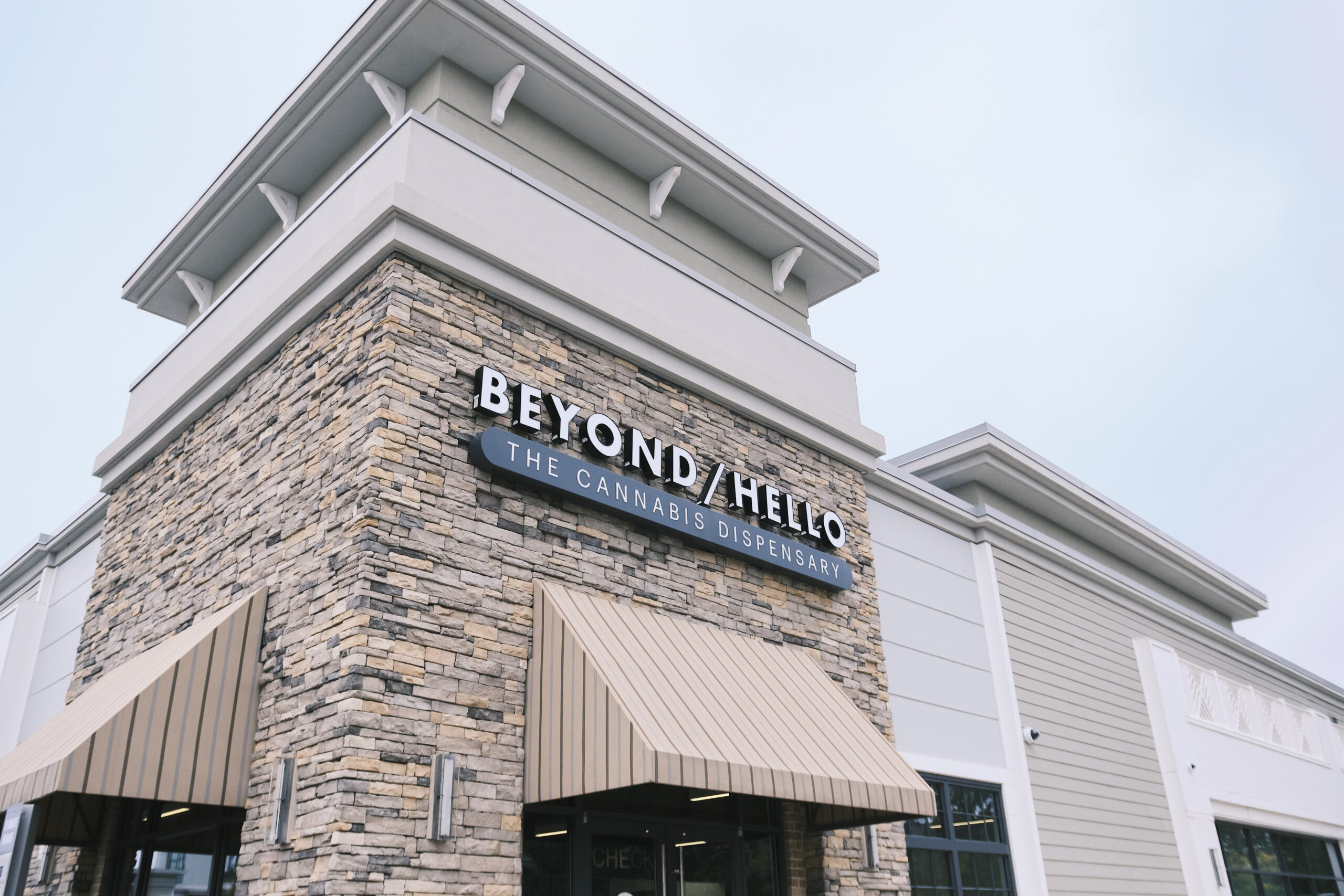 Jushi Holdings, a medical cannabis processor that operates in Northern Virginia, recently opened a dispensary under the Beyond/Hello banner in Sterling. (Courtesy of Jushi Holdings)

Jushi opened the dispensary at its Manasass growing and processing facility in December. What was initially a roughly 30,000-square-foot facility is in the midst of an expansion project to 93,000 square feet, much of which will be used for additional growing space.

The company declined to say how many plants it grows at the facility.

The project is expected to be completed in the second quarter of 2022, Jushi Executive Vice President of Investor Relations Michael Perlman said in a late October interview. Perlman said the facility could eventually be built out to as much as 250,000 square feet.

The company, which operates Beyond/Hello dispensaries, is looking to launch dispensaries in Alexandria, Arlington and Woodbridge. It is interested in existing storefronts near highways with drive-thrus and access to more than 50 parking spots.

“These six stores have to feed into two-and-a-half million people,” Perlman said of the company’s Virginia territory. “We build large so more patients can flow through.”

Jushi launched its own delivery service in the spring. The pilot program, which operates with two vehicles, has been well received by patients thus far, Perlman said.

The D.C. suburbs-based operator plans to leverage the ability to deliver anywhere in the state to focus on the licensee-less Health Service Area 1, which encompasses the outlying areas of Northern Virginia and extends into the Shenandoah Valley.

“We do plan on being able to capture some of the market that isn’t being addressed in Health Service Area 1,” Perlman said.

Dharma Pharmaceuticals’ growing and processing facility has relocated to Abingdon from Bristol and the company was acquired by Chicago-based Green Thumb Industries since it began operations. Green Thumb owns and operates the Rise chain of cannabis dispensaries.

Green Thumb is a multi-state cannabis retailer with manufacturing and growing operations. The company acquired Dharma Pharmaceuticals in a deal announced in early July. 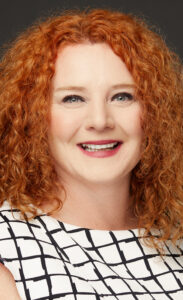 The company opened its first satellite dispensary in Salem in August. Berry, the Dharma Pharmaceuticals co-founder and a member of Green Thumb’s Virginia leadership, said the company was on the hunt for more dispensary sites but declined to comment on what areas were being considered.

Berry said that though the wider retail sector has seen hiring challenges brought on by the pandemic, the company has had a relatively easy time finding applicants, a situation other operators have also experienced in Virginia.

“If we put a job description out there, we get a huge influx of applications and resumes. There are so many people in the commonwealth who have waited so long to be part of the industry,” Berry said in a mid-October interview. “We have been very lucky to have a large pool of potential candidates to choose from.”

Sizing up the recreational retail market

The outlook is hazy on Virginia’s future recreational marijuana market, though the state’s medical cannabis operators are interested in getting into whatever action there might be. Regulations are being debated, legislation has to be reenacted, and the balance of power in Virginia has shifted toward the Republican Party in the wake of last week’s elections.

Lawmakers are debating an earlier start to recreational marijuana sales in Virginia, which is currently scheduled for January 2024. A work group drawn from the state’s cannabis oversight commission was scheduled to discuss proposals on speeding things up today.

Current legislation would allow each of the existing medical operators to sell recreational marijuana at all six of their dispensaries. Some lawmakers have expressed interest in revisiting that number, in line with recommendations from the state’s legislative watchdog agency.

Should recreational marijuana be in play, Goldberg of Green Leaf expects there will be fewer customers who seek to register as medical cannabis patients.

“I expect with the introduction of adult-use, we will see three times the patients that we would see at max capacity with medical,” he said. “It’s a little bit wait-and-see as the regulations get developed and (lawmakers) meet on adult-use to determine the extent to which we will participate in the adult-use program.”

The results of last week’s elections might affect the market’s rollout as well.

It’s unclear exactly how reenactment of the legislation by the General Assembly, which is required for the retail market’s launch, might shake out given the Republican Party appears on track to take the majority in the House of Delegates. Initial passage of the legalization legislation passed on party-line votes pushed through by the Democratic majorities in the House of Delegates and Senate.

The GOP also took the governorship, though Gov.-elect Glenn Youngkin’s campaign said he wouldn’t pursue a repeal of legislation that legalizes marijuana and sets the stage for the recreational marijuana market, the Virginia Mercury reported.

The prices are astronomical

Its a medical dispensary. you aren’t meant to walk in a buy it, you are meant to get a scrip and use insurance that’s why they price so high. Typical pot head, slow on the uptake.

So we have a legal monopoly charging way more than market rates, and you think its a good thing that everyone’s insurance goes up so these guys can profit on a plant you can grow in an old coffee can?

Should be titled
“Reflections on Holding a Legal Monopoly” or “Tales from the Chosen Ones, While Others are Locked Up for the Same Thing”