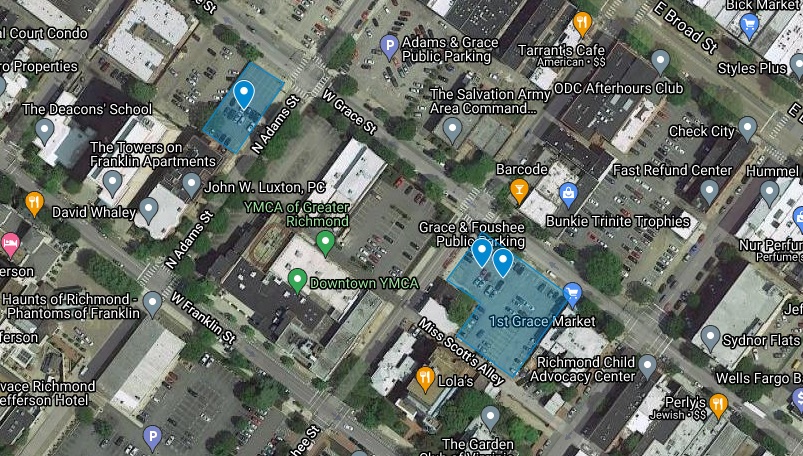 The Philadelphia-based parking and real estate development firm last week snatched up another set of parcels in Richmond, this time two surface lots in Monroe Ward.

The seller was longtime Richmond-based Jim’s Family Parking. The parcels were most recently assessed at a combined $1.2 million.

It’s the latest local deal for Parkway, which since 2016 has spent more than $7 million on lots in Jackson Ward and Monroe Ward.

In 2016 it paid $2 million for a 0.75-acre surface parking lot at 200 E. Marshall St., where it has since partnered with locally-based SNP Properties to propose a 12-story mixed-use building. That project is still in the planning stages.

In 2019, its paid $2.3 million for a nearly 1-acre assemblage bordered by East Marshall, North 2nd and East Clay streets in Jackson Ward. 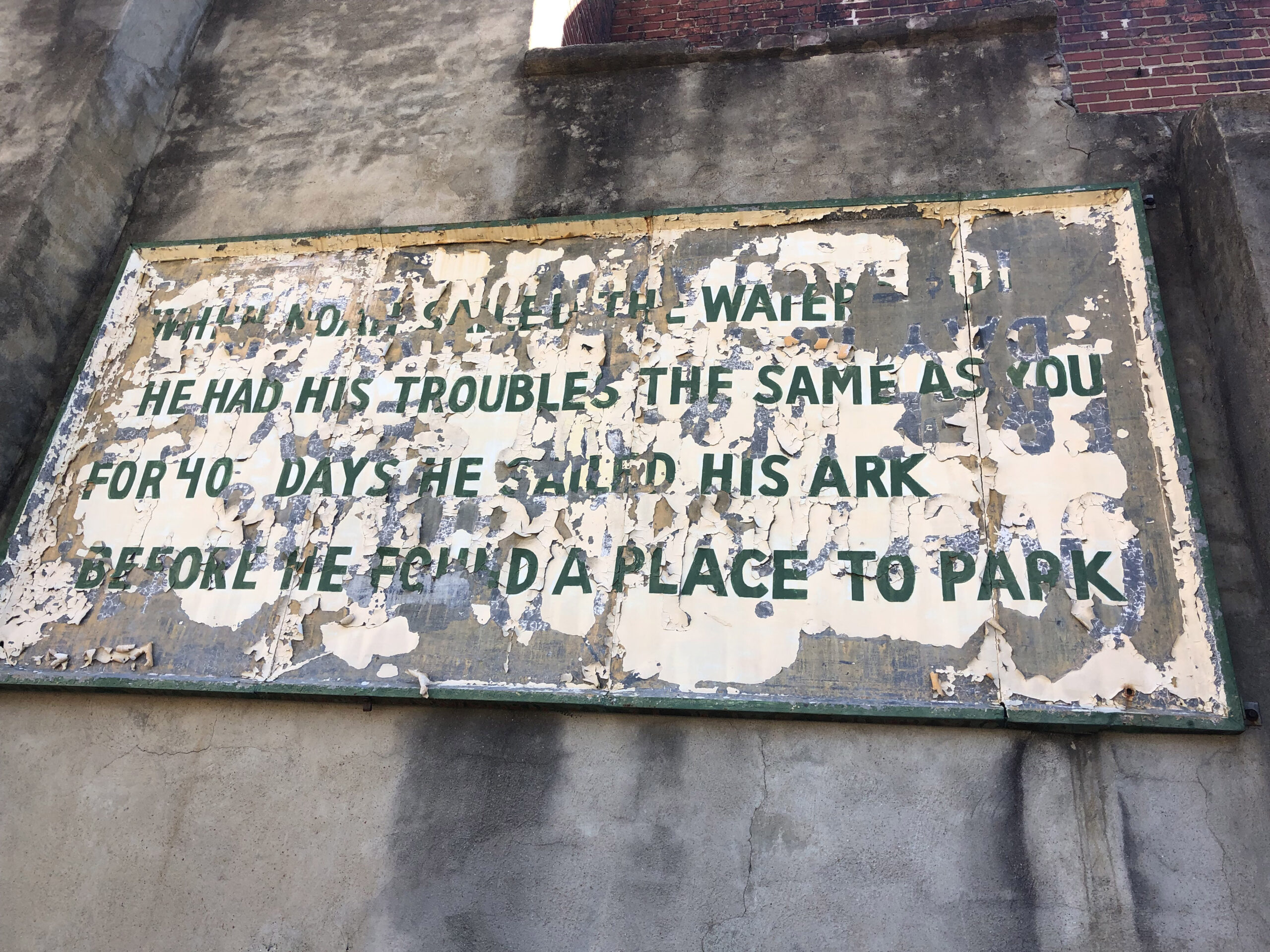 The larger of the two lots at Grace and Foushee is highlighted by a faded old Jim’s Parking sign with a four-line poem about parking. (Michael Schwartz photos)

Robert Zuritksy, Parkway’s president and CEO, said Monday it will use its usual game plan for its newest holdings in Monroe Ward: Maintain them as parking lots in the near-term while preparing them for future development in the long-term.

“We’re gonna do what we do, which is to steady them and try to get them into a higher and better use,” Zuritsky said.

The Monroe Ward properties are zoned B-4 Central Business District.

Zuritksy said the 91-year-old firm has operated and managed parking lots in Richmond for 25 years. Its operations here are managed by Paul Daley.

“We just started buying there about five years ago, though we wish we had started sooner,” Zuritksy said.

In addition to Richmond, Zuritsky said the company mainly operates in nine markets, including its hometown of Philadelphia, Toronto, Memphis, Baltimore and Cincinnati.

Among its largest current development projects is a 360,000-square-foot office building going up in Philadelphia. It’s a build-to-suit project for a large law firm. 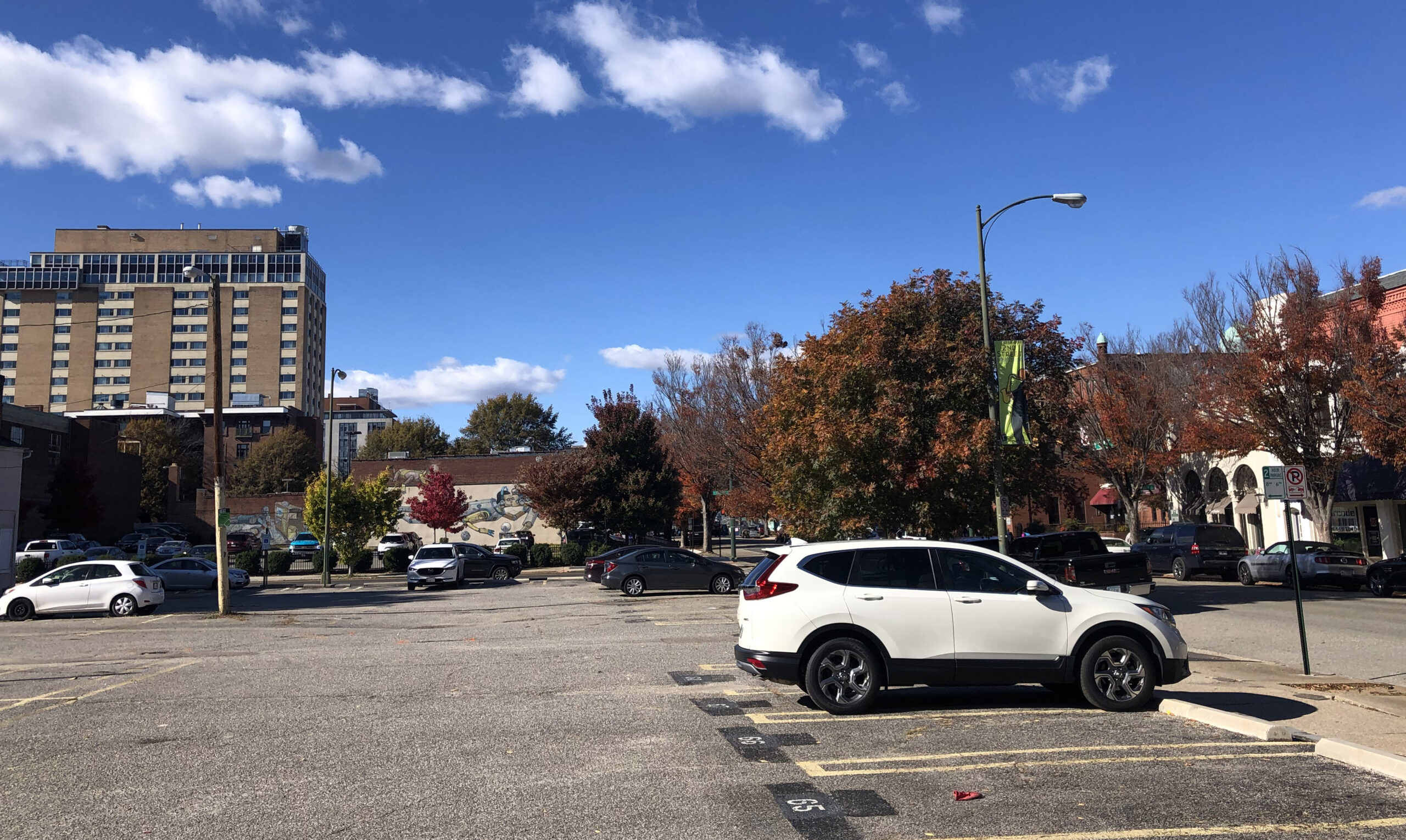 A parking lot at Grace and Foushee, with a student apartment tower in the distance.

Parkway was represented in the Monroe Ward deal by Jim McVey and Michael Morris of Commonwealth Commercial.

“Jim’s Family Parking has been in the industry forever,” Shor said Monday. “These are the last of their assets in the Richmond market.”

While Parkway hasn’t said yet what it plans for the lots, Shor said the development trends in Richmond point in a certain direction.

“The development world has found verticality in Richmond like never before,” Shor said. “Where you used to go to the suburbs and buy 20 acres, now you come to the city for 2 acres.

Two examples of that verticality elsewhere in the neighborhood are One Canal, a seven-story, 138-unit building that’s rising at the northeast corner of Canal and South First streets, and a planned 15-story student housing tower at 321 W. Grace St.

Let’s hope that the future development plans also include some sort of public parking garage. Those lots are full/sold out, even with people still working from home partially. And the deck at 2nd and Grace remains full as well. I can’t imagine that area without them. Ive always believed this area was a hidden gem of downtown. It’s close to all the perks of downtown living, yet still accessible, and one of the big reasons for that has been ample parking. Without that, all development, as well as restaurants and local retail, will suffer. I wish the city understood that… Read more »