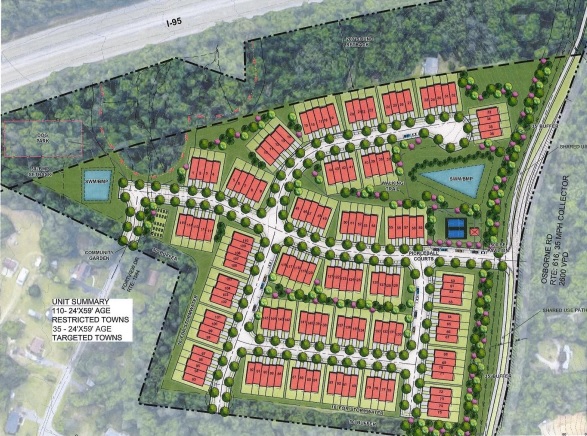 Duke Quality Homes LLC is proposing up to 145 townhomes on a 32-acre site along Osborne Road and I-95 in Chester. (Image courtesy of Chesterfield County)

On the agenda is a proposal by Duke Quality Homes LLC to build up to 145 townhomes on a 32-acre site along Osborne Road and I-95 in Chester. At least 110 of the townhomes would be age-restricted.

Also slated for a review by the commission is a proposal by Piedmont Venture LLC to build a 245-unit townhome development on a 164-acre site at 17501 Genito Road, which is near Horner Park in the western part of the county.

After commissioners vote on whether to recommend the proposals, the Board of Supervisors will vote on final approvals.

The Chesterfield Board of Supervisors set the stage last week for more residential units near Westchester Commons.

Watkins LLC and Middleburg Real Estate Partners are now clear to build the Hamlet at Watkins Centre, which would include 283 townhomes and single-family homes on a 69-acre site at 631 and 701 Watkins Centre Parkway. The development, which is near Westchester Commons, would be occupied by renters.

The board also approved a proposal by Holladay Corp. to build a 176-unit age-restricted residential facility on 12 acres at 5950 Harbour Lane near Swift Creek Reservoir.

Chesterfield officials presented the county’s vision for the rezoning of about 2,400 acres near Moseley during a public meeting held last week. A recording of the meeting can be found here.

The proposed rezoning would clear the way for a 1,700-acre technology park as well as residential development. Most of the land that would be rezoned was purchased by the Economic Development Authority last year.

The Richmond Planning Commission meets Monday at 1:30 p.m. Business includes an ordinance authorizing the acquisition of Lee Circle as a gift from the state, and abandonment of an easement related to the mixed-use project that The Breeden Co. is planning at 2300 Hermitage Road. Planning staff also will present its annual report on initiatives tied to the Richmond 300 plan. Full agenda here.

At its regular meeting last week, the Richmond City Council approved an ordinance declaring surplus and directing the sale of a portion of city-owned land at 1111 Fourqurean Lane, where Commonwealth Catholic Charities is planning a development with 56 income-based apartments.

TOD-1 zonings were approved for 4501 E. Main St. at Rocketts Landing, where PRG Real Estate is planning a 199-unit apartment building, and for a 1.5-acre site at 215 and 301 Hull St. in Manchester, the site of a former manufacturing facility owned by Sampson Coatings. A long-deferred technology zone program proposed for the city was continued to the council’s Jan. 10 meeting.

At their regular meeting last week, Henrico supervisors approved a rezoning for Rebkee’s planned mix of condos and retail on a 12-acre site at 12120 W. Broad St. The board also approved The Wilton Cos.’ requests for rezoning and permit approvals to allow more commercial uses at its Canterbury Shopping Center at Patterson Avenue and Pump Road.