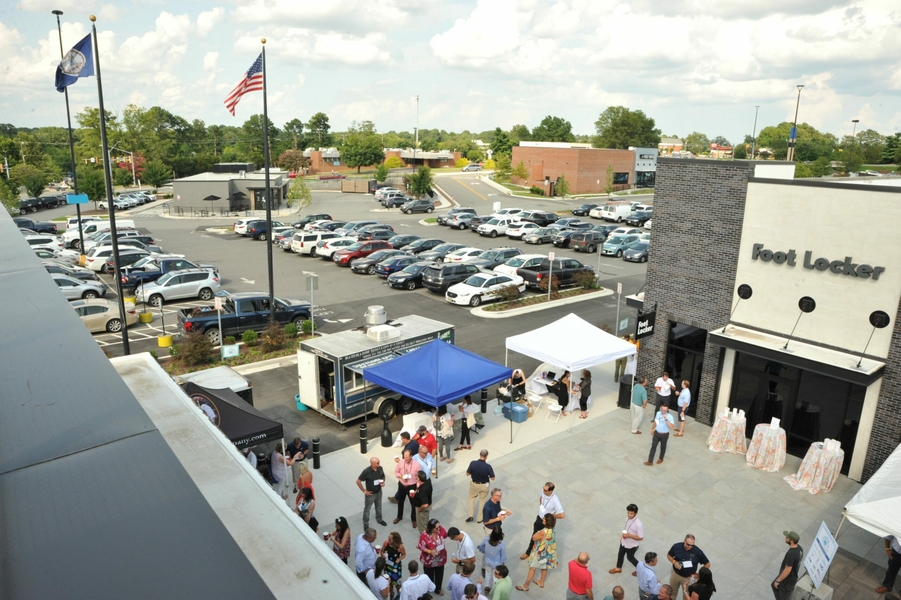 A view of Regency’s new Quioccasin Road-side entrance from the roof of restaurant Sloop John B during a Richmond BizSense Hard Hat Happy Hour in July. (BizSense file)

Regency continues to fill out with non-traditional mall tenants on its way toward its mixed-use future.

The latest to sign on is Henrico County Public Schools, which plans to open a 48,500-square-foot adult education center at Regency toward the end of summer 2022, the mall announced Tuesday.

The center will occupy a portion of the lower floor of the mall near the former JCPenney, said Steve Bonniville, president of mall manager Broad Sky Management. That setup required some existing tenants to relocate in Regency, a process which he said has already been completed.

It’s unclear what the project will cost or what firms make up the project team. The school district didn’t respond to requests for comment Tuesday afternoon.

Construction on the school district’s space at Regency is expected to kick off in late February. Bonniville said students enrolled in the programming are expected to help transform storefronts into the center.

“The adult education center has some trade schools and they want to utilize their students in the project,” he said.

Bonniville said the school district approached Regency about a space there, a proposition that builds on the theme of owners Rebkee and Thalhimer Realty Partners to redevelop the mall into a mixed-use development.

“We’ve been saying for a while we’re moving toward a mixed-use community and that includes uses you won’t usually see in a mall environment,” Bonniville said. “This was just the next piece of that. It’s a great community use and a partnership with Henrico County, which we have grown to love tremendously.”

Other recent arrivals to Regency include Caribbean-inspired taco restaurant Sloop John B, which opened at the mall’s remodeled entrance and courtyard. NOVA of Virginia Aquatics recently opened its massive swimming facility at Regency within the former Macy’s South building.

Surge Adventure Park, an indoor trampoline park, opened in the mall’s other former Macy’s building in 2020.

Elsewhere around the property, work continues on the first phase of the Rise at Regency, a 320-unit apartment complex being built on the site of the former Sears. The first residents of the apartments are expected to be able to move in this April.