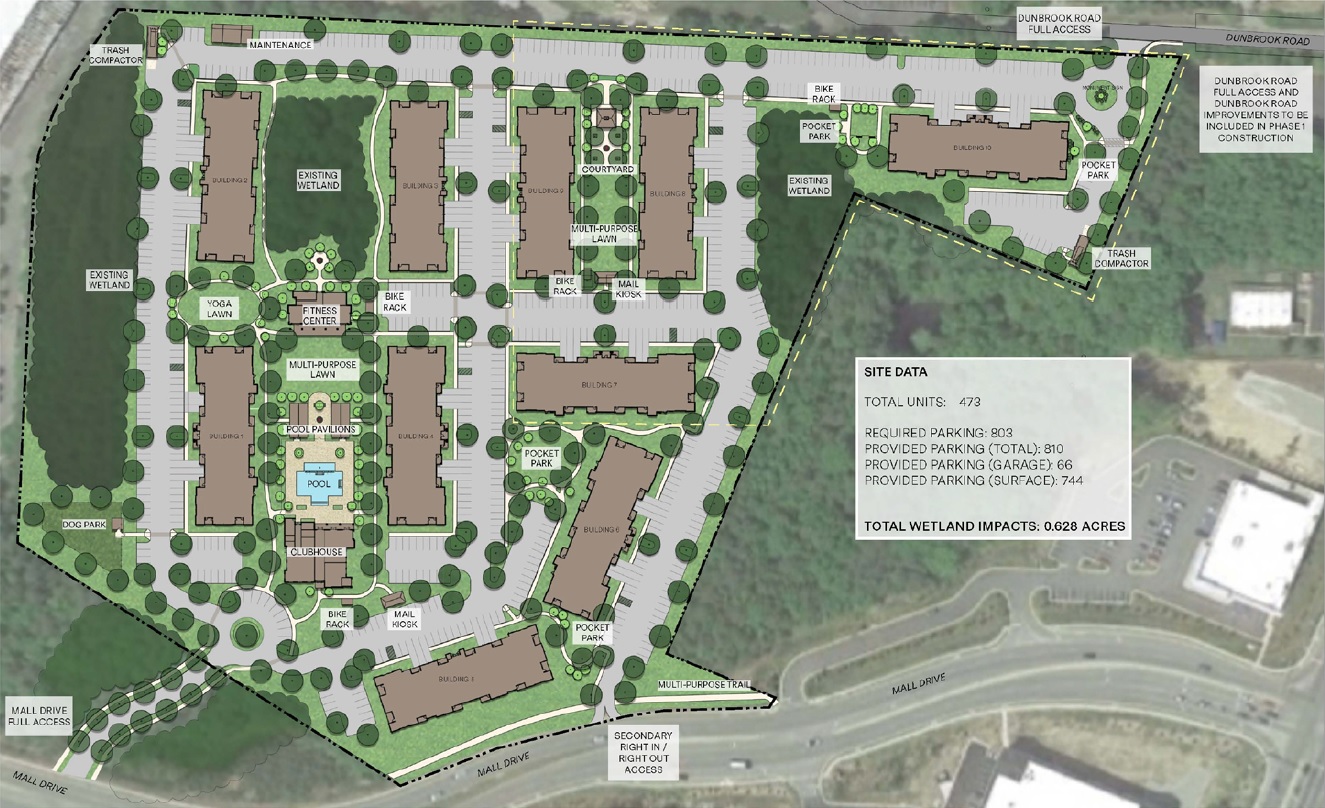 A site plan turned with the right side as north shows the layout for the proposed 10-building complex. (Images courtesy of Chesterfield County)

As it finishes out one project near Westchester Commons, a Charlottesville-based developer is coming back for seconds with hundreds more apartments slated near Chesterfield Towne Center.

Castle Development Partners is planning a 10-building complex totaling 473 units at 1650 Mall Drive, a 22-acre site on the west side of Mall Drive between Robious Road and the Lowe’s Home Improvement store off Koger Center Boulevard.

The wooded site is immediately east of the Summit at Bon Air Apartments and also adjacent to Huguenot Village Shopping Center.

Called Mall Drive Apartments, the complex would consist of four-story apartment buildings with one-, two- and three-bedrooms units. No more than 47 three-bedrooms would be allowed, according to a county staff report on Castle’s request for a rezoning and designation as a conditional-use planned development. 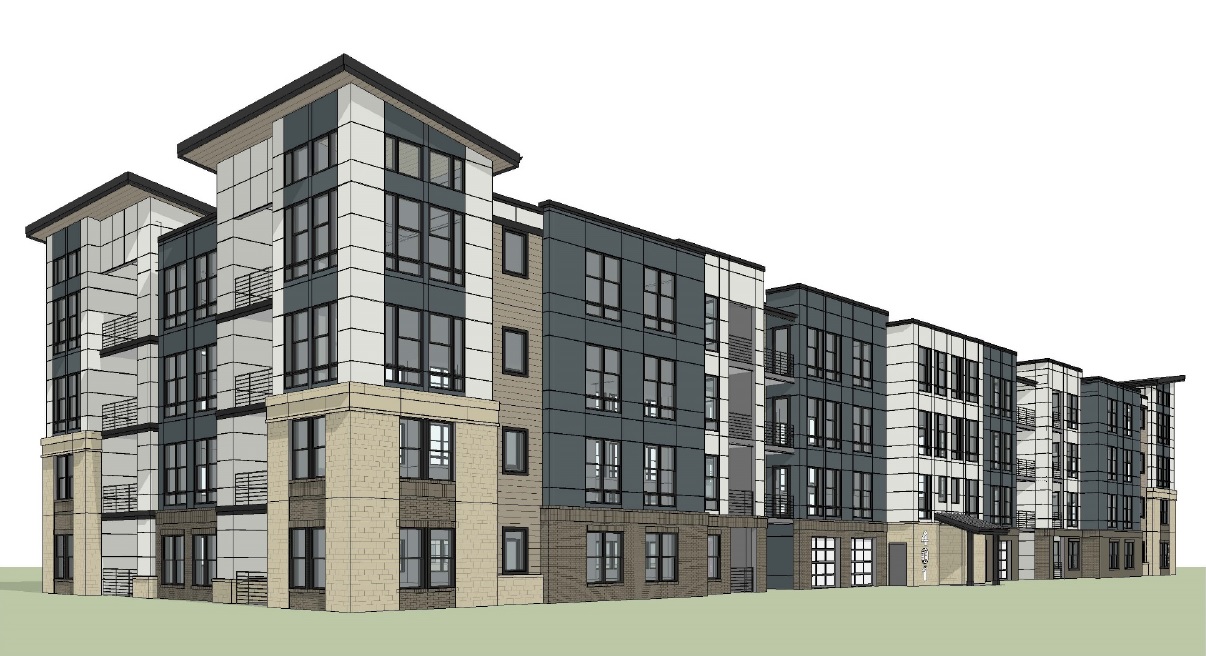 Renderings show the apartments would include balconies.

The request is scheduled to go before the Chesterfield County Planning Commission at its next meeting Jan. 18. Planning staff recommends approval for the project. Final approvals would be required from county supervisors.

Plans submitted to the county show the site would be accessed from Mall Drive and Dunbrook Road. A total of 810 parking spaces are planned, the bulk of those surface parking with 66 garage spaces.

Renderings show the apartments would have balconies. Community amenities would include a 6,000-square-foot clubhouse, a pool with pavilions, a detached fitness center, a yoga lawn, a dog park, bike racks and pocket parks.

Odell Associates is the architect on the project, and landscape architect Cite Design also is involved. Local attorney Andy Condlin with Roth Jackson Gibbons Condlin is representing Castle in its application with the county.

A standalone fitness center is planned along with other amenities.

Condlin could not be reached for comment Thursday. A message sent to Castle through its website was unanswered.

The property is owned by Mall Drive Apartments LLC, a Virginia Beach-based entity that assumed ownership of the site in late 2020. It previously had been owned since the 1960s by Consolidated Sales Co. Inc., which listed the same Virginia Beach address as the current owner.

The Mall Drive project would be the second in Chesterfield for Castle, which is developing the 452-unit Center West apartments along Watkins Centre Parkway near Westchester Commons. Its other apartment developments around Richmond include Beaver Dam Creek in Mechanicsville and The Greens at Virginia Center in Glen Allen.

Please tell me the $11,100 tax assessment figure is a typo – a 22 acre site in the middle of North Chesterfield valued that low looks rather shady…

The developer of the 500 apartments needs to build the 1,100 foot missing sections of sidewalk along Huguenot Road

The rendering looks similar to the apartments that are under construction at Regency Square.
With most of the parking surface parking I hope that Chesterfield County requires mitigation for the water runoff, rather than simply asphalt paving the parking area. There are creative ways to have the runoff go into the ground .It might cost more but the final product is superior to the traditional results.

Why ar so many apartments being built in Chesterfield and who can afford these high end apartments. I’ve noticed the average price these days seem to be around 1,700 a month. To afford this, and to live comfortably, a person needs to make over 100,000 a year. There aren’t that many jobs in the RVA that pay that well.

I’m personally frustrated with how how they are building and approving tens of thousands of these apartments but I see no good paying jobs that could realistically suport living in one of these places.

During the the peak of pandemic in 2020 a lot of Nursing Home Jobs were paying $8.00

Agreed. Way too many apartments &/or condos going up all over the region – no one seems to be spared – City of Richmond, Henrico and Chesterfield.