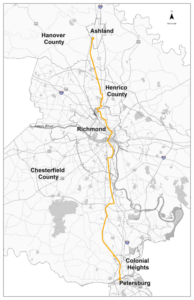 The proposed route for the Fall Line Trail would run from Ashland to Petersburg. (VDOT image)

The Virginia Department of Transportation has scheduled two meetings this week to discuss the Fall Line Trail, a proposed multi-use trail that would run from Petersburg to Ashland.

Initially called the Ashland to Petersburg Trail, the bicycle and pedestrian trail would run through Chesterfield, Hanover and Henrico counties, as well as the cities of Colonial Heights, Petersburg and Richmond and the town of Ashland.

The open-house meetings will review proposed location and alignment tweaks to the trail’s path and gather public feedback on the project, according to a VDOT news release.

The meetings will be held from 5-7 p.m. Tuesday at Lewis Ginter Botanical Garden (1800 Lakeside Ave.) and Thursday at Hilton Garden Inn in Colonial Heights (800 Southpark Blvd.). More information is available on VDOT’s website.

Business on the agenda includes staff updates on a small area plan for Jackson Ward and the Reconnect Jackson Ward study, the latter of which stems from recommendations in the Richmond 300 master plan.

Also on the agenda is a presentation on requested amendments to the Richmond 300 plan. The changes would identify the city’s subsidized housing communities — Creighton Court, Fairfield Court, Gilpin Court, Hillside Court, Mosby Court North and South, and Whitcomb Court — as priority growth nodes in the plan.

The Chesterfield Board of Supervisors voted last week to approve a rezoning tied to a redevelopment of the Spring Rock Green shopping center.

The stage is now set for the construction of a mixed-use development on a 42-acre site at the shopping center. The project, which was initiated by the county, is slated to include more than 1,000 apartments, a 215-room hotel and a two-rink ice hockey venue alongside commercial and office space.

The supervisors also approved a request by Markel | Eagle to build a 200-lot subdivision off Otterdale Road. Homes on the 100-acre site would be age restricted.