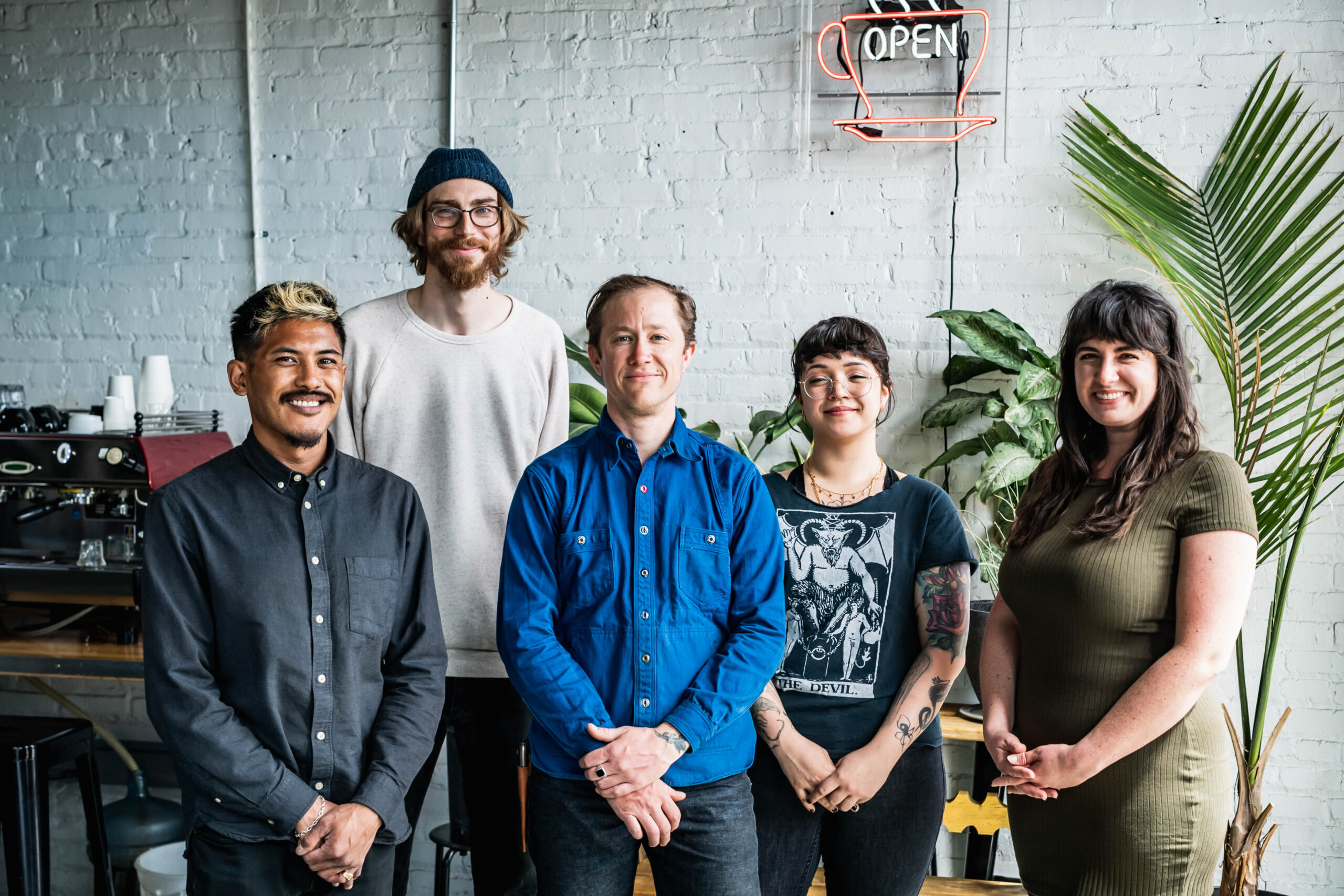 The space was formerly an outpost of Lamplighter Coffee Co. Lamplighter opened there about a decade ago but shuttered during the pandemic.

Afterglow is owned by Alan Smith, Aimee Maki, Julius Delacruz, Allison Maves and Eric Mason, who are former employees of Lamplighter. They bought Lamplighter’s wholesale roasting operation and the Summit Avenue cafe business last year, and launched their company out of the space.

The group has since been running the wholesale side of the business while building up to a reopening of the cafe.

Afterglow functions as a cooperative, which is intended to give the five owner/employees an equal say in its operations. Smith said the owners wanted to create what they consider a more just workplace and better work environment.

“We landed on this concept as the most and the least we could do. It’s a starting point within which to investigate what is possible in the world of work and how good could it be in the system that exists today,” Smith said.

The owners come to consensus on major decisions, such as the recipe of a drink, while a majority vote is enough for decisions deemed less important, Smith said.

Smith said while the arrangement may take longer to make business decisions, the wait was worth the positive company culture it creates.

“We all have to taste this coffee and agree it’s better this way than it is that way. It’s a huge positive to the company because you have every person that is serving the coffee agreeing that this is the best possible version of the coffee,” he said. “Despite it taking longer, you yield an overall better result because everyone in the company is much happier.” 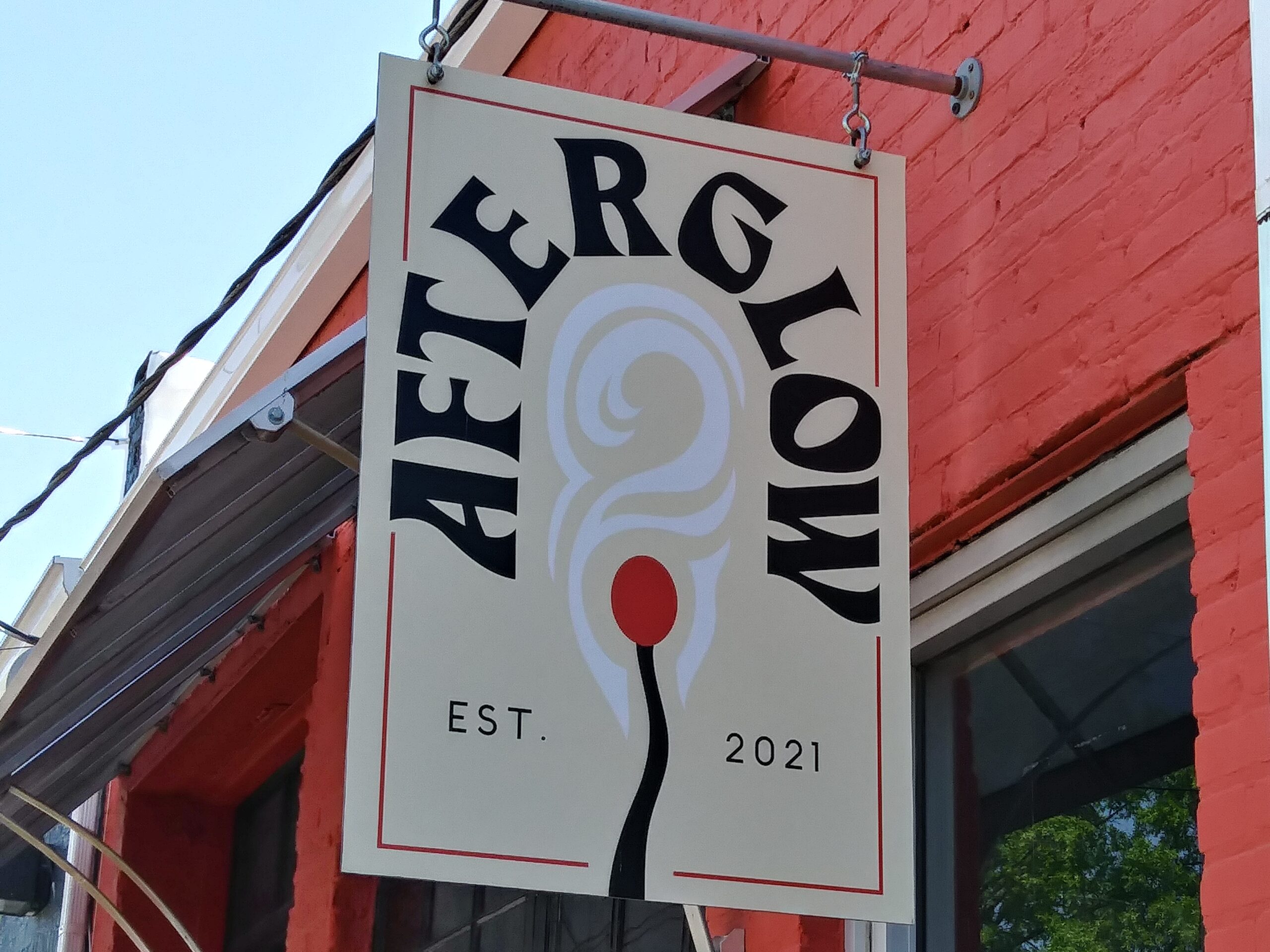 Afterglow Coffee Cooperative has opened a cafe at 1719 Summit Ave., where it has operated a wholesale roasting facility since late last year. (Jack Jacobs photo)

In the run-up to the cafe’s opening, Afterglow ran a series of pop-up events but has ended those to focus on the shop, Smith said.

“The pop-ups were just to get us through the renovation, to keep people interested and have something to offer to our friends who wanted to come by and get coffee,” he said. “That definitely helped us raise the money we needed to get the cafe renovation done.”

The 3,400-square-foot Scott’s Addition location is about evenly divided between the cafe and the roasting area. The cafe has seating for about 20 people.

Afterglow’s cafe sells cappuccinos, lattes, tea and other drinks for $3 to $6. It also serves pastries from Sugar & Twine for $2 to $4 and burritos from Sous Casa for $6. The cafe doesn’t accept tips, and builds gratuities into its menu prices.

The cafe is currently open Friday to Monday, which Smith said was a bid to capture business on a day that some other restaurants are closed.

“A lot of places are closed on Mondays, especially in the restaurant world, so a lot of our friends who worked in restaurants can come here,” he said. “We figured Monday would be a good day to be open.”

On the wholesale side, Afterglow roasts coffee for Lamplighter, which continues to operate a cafe in the Fan. It also sells coffee to between 50 and 100 clients who range from cafes to grocery stores to offices. Smith said while there was some attrition due to the pandemic, Afterglow has been able to find new buyers to shore up their numbers.

“We didn’t lose anyone from that roster when we took over the business, other than the people who closed of their own volition during COVID. We did lose a lot of that business but now we’re finally building back to the pre-COVID levels of wholesale business,” he said.

Now with both sides of the business up and running, Smith said the cooperative continues to fine tune its operations.

“If you create a structure in which there is no hierarchy and you can all cooperate toward a common goal, you’re changing the way you relate to each other,” he said. “It has been a good thing for us.”

“The cafe doesn’t accept tips”. I am so glad to hear this. It is super annoying to buy a simple coffee and have the iPad tip screen presented to me. Just build the employees compenstaion into the product.

Agree. Sometimes I tip, sometimes not. But there has become an expectation for such. Am I expected to tip the cashier at the grocery store, or the pharmacy?

Agreed. I’m glad to tip for service when I’m seated/served at a table. However tipping when ordering at a kiosk/counter or when ordering takeout doesn’t seem right. I tip anyway, but I don’t enjoy it the same way I do when dining out.

It depends. I used to manage a chain family casual restaurant. I had limited seating compared to my peers, but a strong carryout program. Talked corporate into doing drive-up carryout. It was often as high as 20% of my sales. The same care went into preparing those meals (and delivering them) as those for dine-in guests. My carryout folks worked hard.

Best of luck to these guys, i will give them a try.

also, on tipping—I really feel we need a law to clarify WHO GETS THE TIPS.

There have been far too many places where the owners keep the tips (Two at least in Scots Addition) and there are too many apps that basically take your tip and don’t pay the worker you thin you are tipping.

Any evidence of the establishments or aps that you say keep the tips?