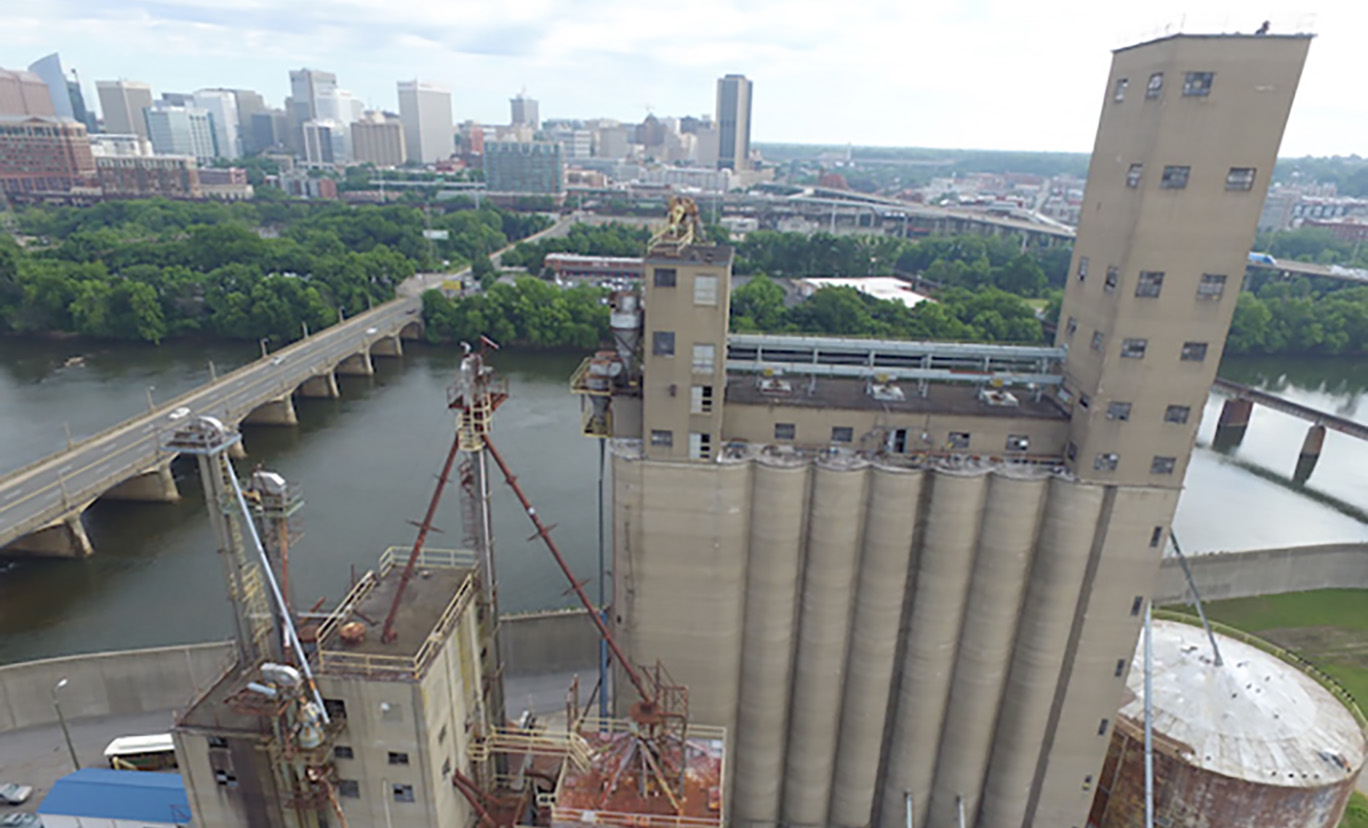 The future is cloudy for one of Manchester’s most iconic high-rise structures, the Southern States grain silo at Hull and the riverfront. (BizSense file photos)

Editor’s note: This is the first in a series of five commentaries examining the current challenges and possibilities for preservation in fast-redeveloping areas of the city.

It’s easy to be slack jawed at the frenetic pace of residential construction hereabouts. But with so many rooftops being built in mature and historic neighborhoods, there is also the danger of losing architectural remnants of what makes these places special, if not unique.

Pockets once bypassed are increasingly threatened with development as we contemplate the bittersweet adage: “Poverty is the best preserver.”

Southside, no stranger to social stress and often denigrated as “Dogtown,” has historically been ignored by local preservationists. If Philadelphia has Camden, Chicago has Gary, and San Francisco has Oakland as blue-collar, industrial, and across-the-tracks (or water) sister cities, Virginia’s capital has Manchester. The town was a separate jurisdiction from 1742 until it was merged in 1910 with Richmond. Today, Hull Street is lined with the best remaining historic fabric, mostly Italianate commercial structures. Nearby, a number of architecturally handsome legacy church complexes survive.

But in the 1960s and 1970s the single-family residences that once graced the tree-shaded, granite curb-lined streets between Hull and the river were decimated at the hands of one man, Harwood Cochrane. He was the uber wealthy and crusty chairman of Overnite Transportation. From his office atop his trucking empire’s headquarters (now UPS Freight) on Semmes Avenue at East 11th Street, he looked disparagingly at the aging neighborhood. “I don’t care about houses,” he told a newspaper reporter in 1982. “We’ve still got bootleggers and dope peddlers.”  Cochrane’s acquisition and demolition of some 140 buildings in the vicinity created the tabula rasa for the recent and ongoing construction boom.

In the mid-1990s the sprawling Truist operations center that sprawls along Semmes Avenue at West Ninth Street was the first structure built on the former Cochrane- and Overnite-owned tracts. Its fortress-like modernist architecture, that signals disdain for the neighborhood, did nothing to establish a sympathetic reset on the gently rolling cityscape. More recently built, single and multi-family residences have been a repetitive and relentlessly cloying architectural boxiness. Meanwhile, a developer who was restoring a number of properties on Hull Street is facing criminal charges. Clearly, the architectural gods and goddesses have not been smiling on Manchester.

But help may be on the way. The Virginia Department of Historic Resources, the City of Richmond and Historic Richmond (a not-for-profit preservation organization) have recently begun work jointly on a historic resource survey of Southside Richmond. It should provide an understanding of the area’s history while identifying potential sites for historic districts and communities and cemeteries previously overlooked. These findings will contribute to an ambitious citywide preservation plan whose first phase will be launched this fall and winter with completion in May 2024.

The survey and plan couldn’t come at a better time. As fast-paced redevelopment of industrial Manchester continues near the riverfront and floodwall, interested eyes are awaiting the footprint and design of a new Mayo Bridge that must thread a tight needle through the floodwall and with relatively limited access approach roads from both the Shockoe Slip and Manchester sides of the span.

Nearby, the future is cloudy for one of our region’s most iconic high-rise structures, the Southern States grain silo at Hull and riverfront. This 80-year-old behemoth is an essential element of Manchester’s character. Architectural historian Don O’Keefe says that its “raw, industrial beauty is compelling.” The preservation of this landmark will require the best combined thinking and action of local preservationists and developers. 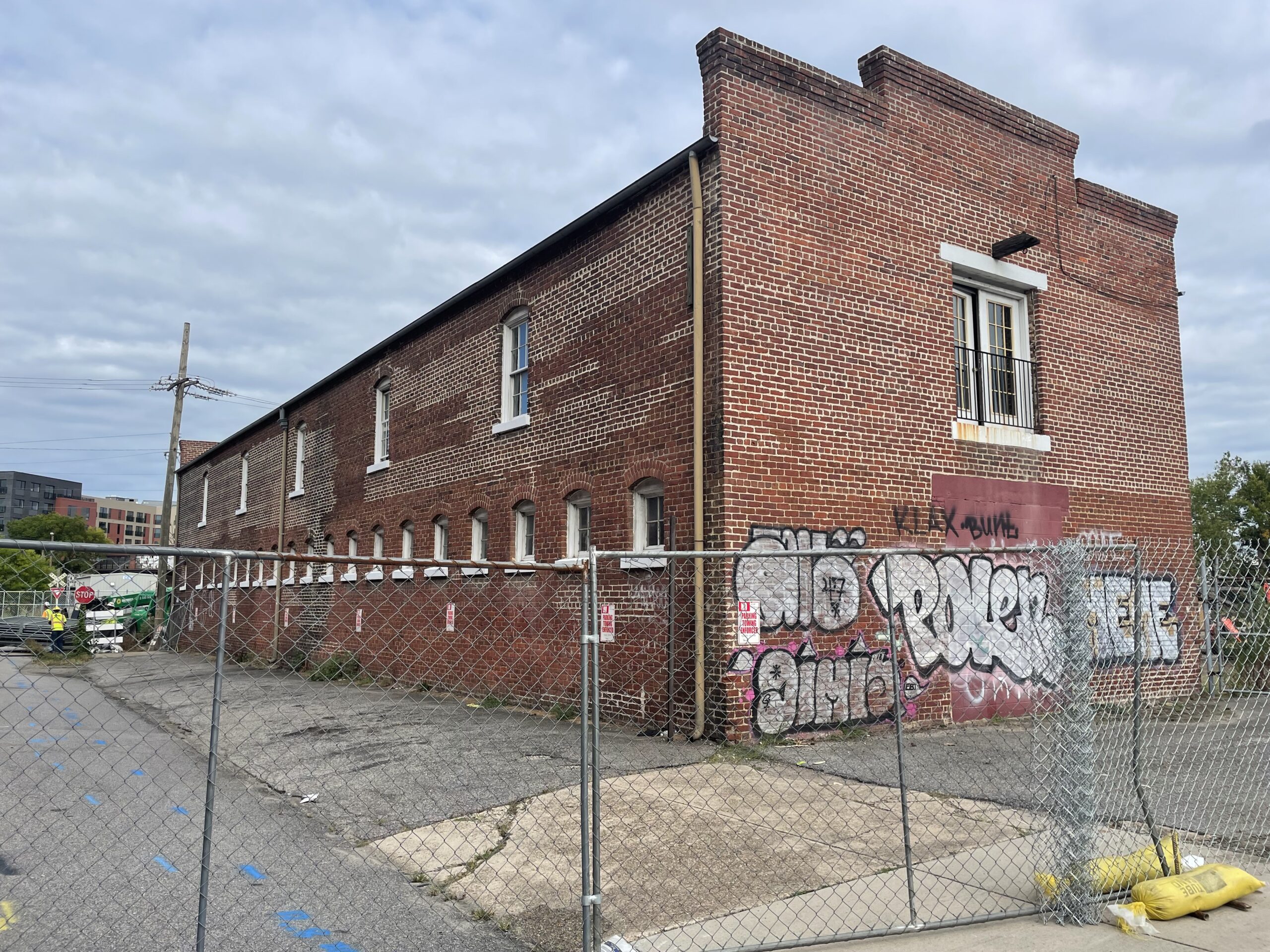 Another threatened building that would have caught the eye of planners, if there had been an earlier preservation plan, is the old stalwart, two-story brick horse stables at 200 Decatur St.

Despite scant information on its origins, this 40-stall survivor of the early industrial age may be Richmond’s oldest surviving “parking” garage, albeit for horses. And with its clearly delineated windows, no building whether old or new, better exemplifies form-follows-function.

Viewed in concert with nearby train tracks, the Richmond Railroad Museum offers a rare example of how two forms of transportation once co-existed here. The city has issued a permit for the developers to demolish this rare horse stable as part of a larger residential redevelopment of the former Caravatti’s architectural salvage building at 200 E. Second St.  I say nay. Ah, make that neigh; this gem should be saved.

Since so much of Manchester’s architectural fabric has been lost, every old and historic structure, large and small, should be seriously examined and considered for possible preservation and adaptive reuse.

Here’s a thought for the Southern States grain silos. I saw an example of silos being converted to hotel space when I was in New Zealand. It was sooooo cooool!

Another example of a grain elevator conversion is a museum in Cape Town. The end result for the interior is simply amazing.
https://www.thisiscolossal.com/2017/09/grain-silo-converted-into-art-galleries/

The Southern States silos are a huge eyesore. Let it go.

It’s the same with the Intermediate Terminal at Stone Brewing. Just let it go. It’s an ugly building that has no real value. If nobody has the capital to do something interesting with the silos and make them look better, then let them go. There are much better buildings like the stables mentioned in the article) to preserve.

Thank you for pointing this out about the intermediate terminal – – the best thing about that building is its apparent solidness but stone claimed that it wasn’t solid enough if I remember correctly if they had a totally free hand of what to do with the structure it could be something amazing but keeping it like it is just seems Like a bunch of historical stupidity.

Next thing you know, it’s 10 years later and future generations have lost everything that made Richmond an interesting place with centuries-old layers of history.

The silos have got to go! They are butt ugly.

I could tell from the very beginning that we were going to be treated to one of these backward thinking critics and fetishizers Of history. I have long said that development will proceed Fastest in Manchester because it has the least of these several species that impede development for special interest concerns. The whole idea that because some ugly grain towers our “old“ (and not very old actually) that they have some kind of ugly beauty or whatever is just ridiculous. Further it is certainly true that poverty seems like the best preserver but of course water and sunlight have… Read more »

The main value of Manchester to Richmond has been that for whatever reason it is relatively tabula rasa And gives Richmond room to grow. People just don’t seem to understand or just don’t care that development will just choose somewhere else to develop if the numbers don’t work in Richmond. The one thing I agree with the author about is the uninteresting boxiness of so many of the multi families not just a Manchester but in other parts of Richmond as well Even Nashville does a much better job for some reason when they build new things… But certainly this… Read more »

I suspected based on the photo that the author was going to pitch the preservation of the Southern States silos. I personally don’t understand having any attachment to such a large, ugly and non-functional structure. Preserve the buildings on Hull Street? Absolutely, but please let these silos go. As someone else already commented, forcing the owner/potential to save the building will just mean it is going to sit there until it crumbles to the ground. It’s simply not worth investing in

Yes there are buildings in Manchester worth preserving. But as these eggheads always seem to misunderstand society needs to prioritize! Historical preservation alone can’t be successful if everything is to be preserved – peoples tolerance for preservation alone goes down when people start becoming too radical about it – – and of course I don’t need to mention that societies tend to have other priorities than preserving the past and dare I say a few of those priorities should be prioritized before historic preservation in most cases. To hear some people talk it’s as if the old Penn Station was… Read more »

“This 80-year-old behemoth is an essential element of Manchester’s character”?? According to whom? The residents of the last 50 years? That would be surprising. Essential to developers investing hundreds of millions of dollars at present? Nope. I can’t imagine how it’s essential to Manchester in the slightest.

Thank you for pointing out what to all especially credentialed architectural experts should be obvious.

I am a huge fan of Ed Slipek and do believe he is a Richmond treasure. But I disagree with him here. There are many structures in Old Manchester that do deserve to be preserved. The Southern State silos are not one of them.