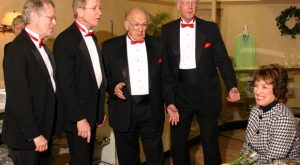 If you want to go the more creative route on Valentine’s, here’s an option that might hit the right note.

The Center for Rural Culture, a nonprofit that promotes and educates local farmers, is bringing back the popular Goochland Farmers Market.

ArborOne, a South Carolina lender on tens of millions of dollars of bonds owed by the fair, wants the court to let it keep its right to take action, which could include foreclosing on the 360-acre Caroline County property the fair calls home.

The nonprofit company that operates the fair filed for Chapter 11 after failing to work out a deal with its lenders to restructure the $83 million it borrowed to develop its new fairgrounds in Caroline County.

Life just got a little sweeter for nearly 50 non-profits in the Richmond area.

A local non-profit has joined forces with a large New-Jersey-based organization.

A group that helps students get their financial houses in order finally has a home of its own.

Richmond Cycling Corps is spinning off a for-profit venture in Scott’s Addition.

A 137-year-old Glen Allen nonprofit has shut its doors.