A Halloween store in Henrico leases store space. A bottling company in Petersburg is sold.

The largest unoccupied commercial building in the Mid-Atlantic sold in Prince George for $21.7 million. And an e-retailer of note leases 500,000 square feet in Richmond.

A $2.3 million sale of a bank building in Henrico heads this week’s list of transactions. A local consultant group leases over 10,000 square feet in Henrico as the top lease.

Apartment sales in Petersburg and Colonial Heights are the top sales for this week. A warehouse in Hanover tops the leases this week. For the entire list, become a BizSense Pro member.

A distribution firm in Chesterfield leases over 58,000 square feet and tops leases this week. A $3 million deal in New Kent County heads up sales. For the entire list of transactions, become a BizSense Pro member.

A mixed-use building in downtown Richmond that sold for $6.4 million heads this week’s list of deals. An industrial lease on White Pine Road in Chesterfield is the top lease.

A $3 million sale in Manchester in the city of Richmond heads the list of purchases this week.

The sale of a golf community in Henrico for $8 million leads the sales this week. For the entire Pipeline, become a BizSense Pro member. 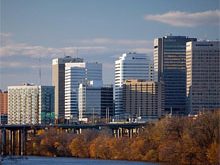 A townhouse transaction for $8.77 million is this week’s leading transaction.