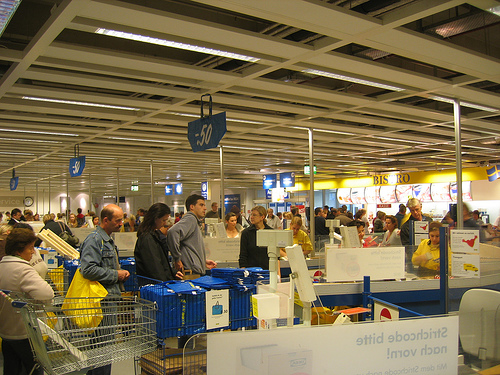 When Virginia shoppers pay the 5 percent sales tax on retail goods, most – but not all of it – goes to the state. A small percentage is kept by the business.

It’s called the dealer’s discount, and it has been in place since Virginia started the sales tax more than 40 years ago. It was designed to cover the retailer’s cost of collecting and accounting for the sales.

Governor Tim Kaine wants to close the loophole to help balance the commonwealth’s anticipated $3 billion budget shortfall in fiscal 2009. Eliminating the rebate would save the state about $65 million a year.

But local business owners have become accustomed to the sales tax rebate and aren’t happy to hear that it might be coming to an end.

“I think that’s disgusting,” said Lola Freeman, who along with her husband owns Freeman’s Men Shop.

Freeman said they get back about $30 a month from taxes collected at each of their four clothing stores.

“The little bit of money that we make, we pay all of our money to the IRS and the state,” Freeman said. “That little bit of discount is not a whole lot of money, but every dollar helps.”

Leila Taylor, who owns the Creatures and Crooks bookstore in Carytown, was also opposed to ending the discount.

“I really consider it to be a handling fee,” she said. “We are collecting the tax for the state and passing it on to them, and we get a little bit of a cut to offset our expenses doing that.”

Taylor said she gets back about $200 a year.

“It doesn’t make or break me. It’s the principle more than the actual amount of money,” she said. “It is at least one way we have some parity with some company that [doesn’t] pay any tax, like Amazon.”

Online retailers such as Amazon.com that operate outside of the state are exempt from paying Virginia sales tax. Taylor said that if the state were to charge the online company sales tax, she would be more comfortable with the proposal to end the dealer’s discount.

Lee Winder, a certified public account who owns M. Lee Winder and Associates in Chesterfield, said many of his small business clients count on the rebate to help defray the expense of calculating the sales tax and making sure their payments to the state are accurately tabulated.

“I don’t think it will do a lot of harm to small business, but it does cost money to get their reports to the state, so they should be compensated something for that,” Winder said.

For example, businesses still have to invest in accounting software and upgrades or hire an accountant.

“In a lot of cases, it doesn’t quite compensate, but it does help,” Winder said.

The average discount is about $450 a year for all businesses, but those in the highest sales category receive an average of about $5,800. Although accounting for only 5 percent of the businesses that receive the rebate, those big retailers get back 70 percent, or about $45 million a year, of the total amount of the state’s spending on the program.

The Commonwealth Institute, a Richmond-based fiscal policy think tank, is supportive of the governor’s plan to eliminate the discount.

“I’m not sure there is a good case to be made [that] by removing the dealer’s discount you are going to be putting a disproportionate burden on small business,” said Michael Cassidy, executive director of the institute. Eighty-five percent of businesses fall into the lowest sales category, getting an average of $7 a month.

Cassidy said a possible compromise could be to put a cap on the program. For example, Maryland’s sales tax discount limits compensation to $500 a month. In Virginia, there is no limit to the amount a business can receive. In Virginia, Wal-Mart receives $4 million a year in dealer’s discounts, Cassidy said.

“Being open-ended, the big-box retailers get a large amount,” Cassidy said. “If we set a dealer discount of only $500 dollars a month, it may start chipping away at the cost of this program.”

George Peyton, vice president of government relations for the Retail Merchants Association, said the group opposes the total elimination of the discount.

“It really is a cost to retailers to be the tax collector for the commonwealth,” Peyton said.

The merchants association’s lobbying wing, the Virginia Retail Federation (which includes the Retail Alliance of Hampton Roads) plans to sit down with legislators and the governor’s people to make the case that they deserve the discount, Peyton said. He said the group might consider a compromise cap in order to “give a little to get a little,” but RMA members voted in December to oppose any reduction to the discount. A reversal of that position would require committee members to meet and vote again.

“It has been a hard hit on our membership to come out of a very soft holiday season and then hear about this budget proposal [that says] we are going to eliminate the money you get to keep for collecting and remitting the sales tax to the state,” Peyton said.