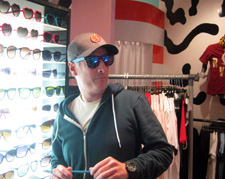 Vacancies are on the rise in Carytown, and some businesses have joined together to save money and boost income. BizSense counted 25 vacant street-level storefronts in Carytown, for a vacancy of 13.9 percent. That is up from September, when we counted 17 empty or unused storefronts.  With vacancy up and national statistics indicating a significant pullback in consumer spending,  some Carytown merchants have turned to creative methods in their quest to remain profitable.

Women’s shoe store Que Bella left its previous location in Carytown and moved their inventory into Pink, a high-end boutique across the street, earlier this year.

“It’s been a wise move,” said Pink co-owner Deborah Boshen. “It helps sell an outfit when you have the right shoe to go with it.”

Under the arrangement, Que Bella owner Heather Teachey splits the rent with Pink, and the stores remain separate businesses. Boshen said she believes the combined space has boosted the number of people coming into the store, helping both retailers emerge from a slow six months of consumer spending.

“She brings her customers and our customers shop with her,” said Boshen.

Elsewhere in Carytown, Bang-On owner Chuck Mugler (pictured above) is dividing his store to make room for another business. Bang-On sells customized T-shirts, the other retailer will sell consignment and vintage clothing.

“We thought it would be a good combination, that the two would fit well together, and at the same time save money on rent and other expenses,” Mugler said.

The consignment side will be owned by Chaz Harpman and will be trading under the name Kitsch. Mugler said Harpman had a soft opening a couple of weeks ago but plans to officially open next month.

Under their agreement, the two retailers will split the $1,800 monthly rent and utility bills. Mugler said it would be a big help at a time when sales are down 40 percent to 50 percent compared with this time last year. Mugler is also hoping it will bring in new customers.

“The idea is that we are going to get more business with people coming through wanting to check out two different things instead of one,” he said.

Mugler said foot traffic in Carytown has been a problem in recent months, which he partly blames on the rising number of vacancies.

“Anytime you have a lot of closings, it’s going to hurt our traffic, too,” he said. “People come down and see empty stores – it doesn’t give you a good feeling.”

Also in Carytown, grooming salon and pet store Dogma has moved into the long-vacant store at Cary and Nansemond streets previously occupied by a home and garden center.

How does counting vacant storefronts allow one to estimate vacancy? Did you select a sample size of same-sized buildings? What if the 25 spaces are 25 of the smallest (or largest) spaces in the district? Admittedly it could be a meaningful number, i.e., 25 of the 180 stores are now dark, up from 17 in September 2008. But it’s certainly not a vacancy rate. I would be curious to know if the recent closings managed to complete their lease terms or if they bailed early. By no means am I an advocate for national retailers moving into the district, but… Read more »

There have been some other new openings … Schwarzchild’s, Heroes & Ghosts, EmbroidMe, and some colorful paint store who’s name escapes me is about to open near Galaxy Diner.

To add on to what MattB says, it would be interesting to compile square-footage-leased figures from property or leasing agent records.

But I hear ya. I lease the office space above ShirtFresh, right next to Bang On and the view from my window is of the old Elephant Antiques building at Cary & Belmont. They only just papered over the windows but I’d love to see something fill that space soon.

Thank God someone is referring to vacancies in percentages! All the other local malls (in the traditional sense) have vacancies even higher than 14 percent. I think only Short Pump Town Center had less than 14 percent.

When I opened my store in Carytown 4 years ago, there was one vacancy. One. Give it time, folks, and Carytown will emerge refreshed and reinvigorated. In the meantime, check out the 3/50 project’s website: http://the350project.net. Gives you something to think about….

[…] Richmond, Virginia Posted on September 17, 2009 by lesterbarber Richmond BizSense reported in April that Carytown vacancy is increasing, as evidenced by the number of vacant storefronts […]

If you are a Carytown merchant and are interested in sharing your space like Pink and Que Bella are doing, please contact me. I am currently an online only store but am trying to get a physical store open before the holidays. This would be a great way for you to cut costs and for me to get noticed. http://www.philanthrofashion.com
[email protected]