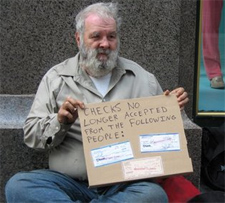 They wait with pleading eyes at busy intersections and highway off-ramps.

They hold tattered signs that read: “Homeless please give spare change” or “Every little bit helps.”

As the economy continues to drag, panhandlers are an increasingly common sight along roadways and shopping districts around Richmond. Local businesses, in particular retailers, say panhandlers scare off customers, even if there is no threat to safety. And a growing homeless population can also be a blemish for economic developers trying to show off the region.

To combat the problem, the nonprofit group Homeward launched a three-month campaign Monday to remind residents that handing over spare change might not be the best way to help.

“How we help people is not to give them 10 bucks,” said Kelly King Horne, executive director of Homeward. “It is to help them find a job, get treatment for addiction or find an apartment.”

Next month the agency will begin selling cards are redeemable for bus passes and include information on where homeless persons can seek support services. People and businesses can give the cards to panhandlers in lieu of cash.

“We hear from a lot of people, ‘Should I give to panhandlers?’” said Horne. “Giving cash is not a good way to help, the cards give a person a respectful and effective way to respond.”

The details are still being finalized, but the cards are expected to cost about $2 apiece, enough to cover the bus fare and the printing. Horne thinks businesses, especially those located downtown, will be fans.

Homeward’s outreach program is just one idea being promoted in the city to combat panhandling; 1st District City Councilman Bruce Tyler has another.

Tyler, who is an architect at Baskervill, proposed an ordinance this year that would make soliciting money from a motorist a misdemeanor, even if the panhandler in question doesn’t ask out loud but has a sign.

Tyler, along with two other sponsors, recently withdrew the proposal. The bill faced a fight from the ACLU on First Amendment grounds, and Tyler wanted to redraft the proposal so that it did not affect fundraising for the city’s firefighter’s Fill-the-Boot campaign.

Tyler said he doesn’t want to eliminate panhandling because it adversely affects business, but because of potential accidents.

“Truthfully, I looked at this from day one as a public safety issue,” Tyler said. “It creates hazards for drivers who have to sometimes dodge these people or stop short.”

So far there haven’t been any reported incidents, but Tyler said it is “like a freight train coming.”

Homeward does not support any ordinance that limits an individual’s liberties. Tyler said he thinks Homeward’s campaign will help reduce panhandling, but not by itself.

“I think it’s a multi-pronged approach; that’s one way to deal with it,” Tyler said.

David Napier, president of the Shockoe Bottom Neighborhood Association, said he has mixed feelings on the best approach to deal with the panhandling problem.

“Free speech is the bottom line; people have a right to ask for money,” Napier said. “But if they are going to do it down here, they don’t need to scare off business.”

Napier said he has seen a small increase in the number of panhandlers in the downtown district, new faces among the old-timers.

He said he regularly receives complaints from area business owners about street solicitors, but Napier takes a diplomatic approach to the Bottom’s homeless population.

“We got some regulars that kind of live down here,” Napier said. “We got to know them well enough to keep them in line.”

He said about twice a week he has to talk to panhandlers about being too aggressive. Napier also said police enforcement has improved when they are caught begging within 20 feet of a business’ entrance.

“I see some of the people down here that are genuinely down on their luck, and some other ones that like the neighborhood and that is how they are going to make a living,” Napier said.

Part of Homeward’s approach for dealing with the problem is to understand who panhandlers are. In January, they conducted a survey of Richmond’s homeless population. Of 692 adults who complete the survey, only 11.6 percent indicated they received money by panhandling.

Homeward questioned the panhandlers further; below are some of their findings:

-65.8% reported a problem with alcohol sometime in their life.

-54.1% reported having a high school education or GED.

-37.8% reported that they had been evicted from a property at which their name was on the lease.

BizSense has wondered how much a panhandler can make in Richmond. Anyone with any insight should contact us, [email protected] Click here to read about a panhandling contest in Minneapolis.

The problem with this program, which I remember a similar one years ago by the Daily Planet, is that not all homeless people are comfortable or mentally capable of voluntarily checking themselves into shelters or being around large groups of people, so they rely on the help of strangers on the street. I understand the gesture behind this idea is in kind with the homeless, but it shouldn’t be the only sanctioned way to help with your spare change.

I think this is a great idea on the part of Homeward. A program like this effectively weeds out those who have chosen to make a living by panhandling and gives those who need help the opportunity to seek it. Kenny, if people don’t have the capacity to seek help for themselves, how can you consider it helping them by handing them change to buy the booze or drugs that probably got them on the street to begin with? Handing out change is a completely ineffective, feel-good approach to dealing with homelessness that is embraced by the naive. Giving to… Read more »