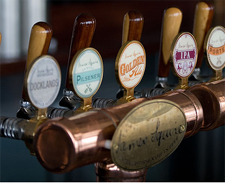 From its headquarters in Powhatan County, Dave Adams’s company, InteliTap, tracks kegs of beer from the brewery to the moment its contents are poured into a customer’s frosty glass. That means Adams can notify a bar owner anywhere in the world when a barkeep is a little too generous with a pint of the good stuff.

Until now, the company’s keg tracking service was responsible for most of the company’s sales, but this year Adams said he expects that to shift to restaurants who want to keep a closer eye on their taps.

The ability to identify and eliminate waste might be why the company is growing in the midst of a recession. InteliTap’s system is in about 75 restaurants in the United States and United Kingdom, but Adams said that number is expected to double or triple this quarter.

“This is our big expansion year,” Adams said.

Last year, the company earned revenue of $3 million, which Adams said was a reasonable growth rate over the previous year. The company has 30 employees.

“We make sure from when it comes in [that] it’s in the right inventory position. We make sure the beer lines are clean. And the most significant part of delivering a good beer — we make sure it served at the right temperature,” Adams said.

Making sure the beer is cold is about not only quality control, but also inventory control.

Warm beer is foamier, which makes for more waste when it’s poured. The InteliTap system keeps track of every drop of beer that passes through the tap and sends the information directly to the client’s computer. That allows the owner to compare beer poured with money in and to see whether potential profits are going down the drain.

If any of the devices register readings outside the parameters set by the owner, they will be alerted right away, Adams said.

“The location will get a phone call from us before they notice anything is wrong with the beer,” he said.

The company started in 2005 with an investment of $2.5 million from Rick Sharp, who has served in various executive positions at Circuit City and CarMax. Last year, the company raised an additional $5 million in capital from West Coast investor Fred Howe.

Adams, who serves as chief executive and chairman of the company, is a veteran of the supply-chain industry who early in his career designed networks for PepsiCo and Frito-Lay. Before that, he planned supply logistics for the U.S. Navy. He first moved to the Richmond area 10 years ago to serve as vice president of operations for McKesson Corp., a health-care products provider.

The idea for tracking beer at the consumer level rose from a Denver-based startup Adams was involved with that tracked beer kegs with radio-frequency identification tags.

InteliTap acquired most of that company and built its business around tracking kegs. InteliTap tracks 75 percent of the kegs in the United Kingdom; one of their biggest clients is Scottish & Newcastle, whose brands include Foster’s, Amstel, Heineken and, of course Newcastle Brown Ale. Other clients include Coors and Carlsberg.

“It’s a little black piece of plastic, every Newcastle keg has it, and they are all managed and maintained from Powhatan,” Adams said.

Adams said replacement kegs cost $130 apiece, which is why brewers are willing to pay InteliTap to track their location and condition.

But perhaps the bigger growth area is in selling to pubs and restaurants that want to avoid waste or theft. Adams said that at a typical restaurant draft beer has a loss rate of 20 percent, which can be caused by over-pouring or employee theft.  Many restaurants that use the system have reduced their loss rate to 5 percent or less.

In a keg that holds 125 beers, that’s 25 pints at $4 a pop for recaptured revenue of $100 a keg. (Even a small pub in the Fan can blow through four kegs on a weekend night.) The value is an attractive one to restaurant owners struggling to survive tighter consumer spending.

“We’re doing installs as we speak at some major franchises in Chicago, Wisconsin, Kansas and Texas,” Adams said.

A franchise ownership group in the Chicago area that piloted the system at three of their Applebee’s restaurants started installing it in six more restaurants last week and announced their intent to roll it out to all 80 of its stores by the end of this year.

Adams said customers typically have their beer costs reduced by as much as 25 percent from the amount of saved beer combined with increased sales. That averages out to $1,000 of net margin per restaurant each year.

InteliTap also trains restaurant staff in proper pouring and cleaning techniques. Those restaurants are “TRUST”-certified by the company and can use licensed marketing materials to advertise the fact that they are serious about their beer.

“We cannibalized other areas: We took 20 percent from bottle beer or mix drinks and put it into draft,” Taylor said, adding that the margins on draft beer sales were higher after installing the tracking system.

Taylor said he has received at least 50 alerts from InteliTap, calling his attention to everything from an after-hours pour to a warm beer.

“If at 2:00 in the afternoon a keg box is no longer cooling, it is something we can respond to right away before the beer gets hot,” Taylor said. “Once it gets hot if it foams we lose the yield and the quality.”

I would like to get a software that allow our distributer track tab handles by accounts and brands as well.