A hand-drawn map of Manchester is unfurled across Rick Gregory’s desk.

It is adorned with neon-colored sticky notes that foretell his grand vision for the abandoned industrial buildings that inhabit Richmond’s urban landscape south of the James River.

“This is our world,” Gregory said, his hand waving over the 15 city blocks owned by his and business partner Tom Papa’s development firm, Fountainhead.

The area, once the industrial powerhouse of Richmond, is home to building shells as the companies that owned them have moved over the past 20 years.

“This end has been developed,” Gregory said, pointing his finger at Plant Zero, the artist lofts his group developed more than five years ago. It is also the location of the glass-walled office where he also works as an attorney for the Gregory Kaplan law firm.

“Now we are going to develop this end with New Manchester Flats,” Gregory said.

When finished, it will represent a $35 million investment and add about 175 residential units to the area. The development is partly financed by historical tax credits, as well as New Market tax credits (for development in low-income areas). 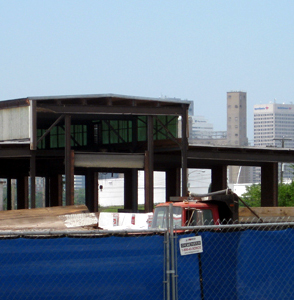 Without credits, Gregory said much of the development here (and throughout the city) would not be possible.

“That’s where the equity comes from to start these, especially in this economic environment,” said Gregory.

The New Manchester Flats, formerly a factory for Southern Stove Works, is no exception.

“It will be the poster child for new urbanism in that it will be apartments, office, an adult day care center and artist studios,” Gregory said.

Part of that vision has already been achieved. The adult day care center has been in full operation since the beginning of this year, with 30,000 square feet leased to Riverside Hospitals. The first phase of apartments is expected to be complete in December, and the final phase is to be finished this time next year.

The flats will also feature artist studios in an open floor plan. Gregory said it will have shared equipment, such as a printing press, as the centerpiece of the artist colony he hopes to inhabit the space.

It’s not just mixed-use, but also mixed income. The apartments will be a mix of subsidized and market rate, and some will be designed for people with disabilities.

“There is a demand in urban environments for apartments for people with disabilities and to give them the same type of apartments that other people in society have,” Gregory said.

Right now, New Manchester Flats is an island in a sea of cinder-block warehouses, diesel repair garages and chain-link fences. But it won’t be for long as development progresses.

In the next two years, Gregory said, more than 500 units will become available in the area (not all his), in addition to the 200-plus there now.

He isn’t worried about renting them, as the ones his company owns now are completely leased, he said. Creating apartments are tops on his agenda, in order to build the critical mass of residents necessary to fuel retail and services that his firm will bring in time.

His attention turns back to the map. 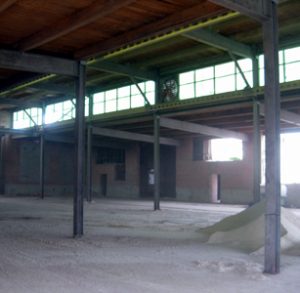 “Once we get those two ends developed, then we’ll push into the logically highest value land here at the interstate,” Gregory said, eyeing the Maury Street exit off I-95, the first off-ramp into the city from all points south.

That is where he said he would like to develop next with mid-rise apartments and street-level retail.

With the city department of community development in support of a mass rezoning for the area and no residents living there to object to the direction the neighborhood is heading, Gregory said there is only one real obstacle: the economy.

While many of the area’s major banks, including First Market, Wachovia and BB&T, have invested heavily in the area, Gregory said that at the moment their hands are tied.

“Everything just takes a lot longer and a lot more equity and sweat,” said Gregory. “But we’re getting them done. That’s the important part.”

[…] Bizsense takes a look at Fountainhead Development’s progressive plans for Manchester: “It will be the poster child for new urbanism in that it will be apartments, office, an adult […]