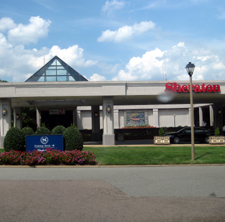 The cracks in Richmond’s commercial real estate market are getting bigger.

Lenders are beginning to take back more delinquent properties as the number of bad loans around town accelerates, including the Sheraton Richmond West hotel on the 6000 block of Broad Street.

According to data from market research firm Trepp, the Richmond market currently has 349 such loans totaling $2.5 billion. Six percent of those are delinquent, for a total of 14 bad loans with a balance of $161.5 million. Delinquent loans include anything from more than 30 days overdue to a full-blown foreclosure.

That is up 163 percent from the end of March, when there were just seven bad loans with a balance of $61.6 million.

(BizSense first investigated CMBS loans in Richmond back in April.)

Since the end of March, there have been three foreclosures on properties with soured CMBS loans totaling $50 million, and another three worth almost $8 million are 90 days overdue.

One recent example is the Sheraton Richmond West, which was foreclosed in June.

The hotel had been operated by the Rhode Island-based Procaccianti Group, which also was a minority partner with the private ownership group, since 2000.

In April 2007, the owners took out a $29.5 million loan on the property. It was a 10-year, interest-only loan with a balloon payment due at the end of the term.

But the owners never invested the money back into the aging, 372-room hotel, which was built in 1974. Over the past 12 months the owners were delinquent seven times, and, in June, CW Capital took back the hotel.

“As you know, Richmond has seen an unbelievable increase in supply, and it hasn’t grown in conjunction with the demand for rooms,” said Ralph Izzi, a spokesman for Procaccianti Group. Izzi did not elaborate further on why the owners let the property go.

(Procaccianti Group also formerly owned the Richmond Marriot but sold it in a multi-property deal to Apple REIT last year. You can read more about recent changes at that hotel here. They include a new restaurant, and a fresh paint job.)

According to Smith Travel Research, the Richmond/North Glen Allen market saw an 8.6 percent increase in room supply during the second quarter compared with the previous year. The increase in supply was accompanied by a 9.2 percent decline in the number of rooms sold.

The opening of a 250-room Westin Hotel across the street in December did not help the Sheraton’s bottom line.

According to the CMBS loan data, the Sheraton had a 68 percent occupancy rate the year ending December 2007. Since then, occupancy levels in the area have declined 25 percent and currently stand at 46 percent in the West End market.

That would have put a serious dent in the hotel’s 2007 net operating income of $3.38 million, and with a monthly interest payment dampening earnings even more; it might have made financial sense to the owners to just walk away.

After the foreclosure, Pyramid Hotel Group of Boston was appointed by the court to manage the property on behalf of the lenders. The management group kept the existing staff and general manager in place, said John Hamilton, a vice president of business development at Pyramid.

Hamilton said the hotel will keep its license agreement with Sheraton but didn’t say what will ultimately happen to the property.

“I am not aware and can’t comment on what the owners’ and lenders’ objectives are,” Hamilton said.

A source in the hotel industry said he believes the hotel will lose its Sheraton flag within eight months, which means it could become another chain, such as a Ramada or Clarion, for example. The property may eventually go to auction, according to the source.

Other local properties going into foreclosure include a freestanding former Circuit City in Colonial Heights, a wellness center in Powhatan and a shopping center on Horsepen Road.

Eric Robison, an investment broker for the commercial brokerage Thalhimer, said this could be beginning of a bigger wave of commercial foreclosures.

“The signs point that it should be coming,” Robison said, “but I just don’t know. It really depends on the lenders if they take back more commercial property and force sales.”

Robison said banks have been reluctant to foreclosure on commercial properties to avoid having to write down the losses, but, with more properties going into default, it is becoming harder for banks to extend loans.

“As landlords experience more and more vacancy and go months and months without income that they need to support existing loans, their properties are going into default,” he said.

He said borrowers face three choices: buy back the loan at a discount, sell at a loss or give back the keys.

In the meantime, Robison hopes the brokerage industry can get enough deals done to plug up the leaks.

“If we get the vacancy numbers turned around, some of these borrowers will do much better,” said Robison.

Great article…please keep tabs on this and let us know as it deteriorates. This process is largely faceless, so we need you guys to keep us in the loop.

I’m just baffled by the over building of hotels in the Richmond area, and it’s only getting worse (see Short Pump). A hotel that’s on average of 46% occupied has no business even being open. It’s nearly impossible to make money.

sfd28… part of the problem is the planning process for many of the new hotels near Short Pump began back in 2004 and 2005, when business up there was booming. But it takes so long in Henrico County to get final approval to build anything (almost 3 years for the Hilton near Dominion Chevrolet, for example) that by the time the hotels got approval, the market had fallen out. Unfortunately for the developers, once you get the approval if you don’t go get the loan immediately you’ll never get it. They had to build the hotels or lose any chance… Read more »

WOW! your website have the great information about loan .I’m sure I will be back agian.

I am not an ex-associate, but I had the same response upon reading the article, based on the Marriot dealings. Its time to root out the downtown corporate welfare that has been a problem for years.

james – its the same thing that’s been going on across the country. Richmond overbuilt, plain and simple. Now some of these hotels will have to pay the price… Unfortunate, but just a reality. Anyone seen how empty the office buildings in Innsbrook are now? There’s no way those hotels can be supported.