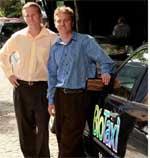 Three weeks ago two brothers from Chesterfield launched BioTaxi. They take turns driving a black Benz taxi that runs on used cooking oil. And already they are looking to hire a few more drivers. They also want to add a few more taxis to handle the call volume.

But their biggest concern these days is an obscure taxi regulation in the City of Richmond that prohibits cabs ten years and older. Theirs is a ‘99 and will no longer be street legal in 2011 unless the City creates an exemption.

But other than that, business is booming, and a lot of fun for the Anderson brothers.

RBS chatted with Joe Anderson about the business. His brother was in the background helping him on some questions.

Below is an edited transcript:

Joey Anderson: We do. We are looking to hire a few drivers, too. I never thought of myself as a cab driver, but it’s a ton of fun. We meet lots of interesting people and it’s networking at its finest.

RBS: How have first three weeks been?

JA: Um, pretty busy. It’s been a little overwhelming at times on the weekends. But we’ve had a good response from everybody so far. Anytime someone rides in the cab, they tell us they love the concept.

RBS: How are people finding you?

Jeff and I did a whole bunch of marketing. We went to bars and hotels and dropped off our flyers and cards. Some of it is also driving around. People see the car.

RBS: Tell me about your ride. It’s a Benz. Not bad.

JA: It was used. And we get fuel at various fast food restaurants and bars downtown. Fast food restaurant is our primary income of fuel. We go through 50 gallons a week. We have to take the fuel to a plant we rent in New Kent County once a week to get it processed.

RBS: What are some of the challenges of your startup?

JA: We have too many customers. Sometimes we can’t take all the calls. We need to expand quickly. During the week it can be relatively slow. But starting Wednesday nights through Saturday nights, the calls come non-stop from 9:00 p.m. until 3:00 a.m. So the plan is to develop an environmentally friendly suite. One of problems we are facing, the car you see, a city ordinance for taxi cabs said we can’t drive a taxi older than 12 years or if it has 300,000 miles or more.

Our car only has 80,000 miles. And, we’re getting lower emissions than Prius, and the car is safer.

RBS: I’ve noticed cab rides are very expensive in Richmond. How has that affected your business model?

JA: The rates are standard and regulated in Richmond. We have to charge same as other taxis. We wanted to charge cheaper, and figured that could help us get into the market. Then we realized that people still take cabs, so we could use the standard rates \to our advantage. Why not use our services? We’re environmentally friendly and more professional than anyone else.

RBS: Now what’s your plan to keep your taxi running in 2011?

JA: We are working as hard as we can. Apparently city ordinances are publicly voted on. We’re hoping to get an alternative fuel vehicle exception to the rule. Other than that, there are very few cars we can drive biodiesel with.

RBS: How many cars could you run successfully in Richmond?

RBS: One last thing, do people hail a cab here?

JA: Rarely. Most of our business is generated from people calling us.

It seems like a no brainer that the city would extend some sort of olive branch towards a business that is obviously “green” in it work. This business is a positive light for the city.

If they continue to expand they will need to move their refinement system closer to Richmond.

I have the sudden urge for french fries.

“The elevator to success is out of order. You’ll have to use the stairs…. One step at a time.”

We LOVE Bio Taxi (enough to set up a corporate account with them and trust them with our most valued clients). Keep up the good work guys and we will vote on any ordinance you need us to.

These are two innovative young men providing a great service; we need more upstarts like these two gentlemen as they provide a unique alternative to the Richmond transportation scene while being conscious of the environment.