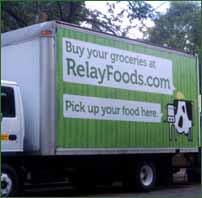 A Charlottesville startup has arrived in Richmond, hoping to change the way you buy groceries.

Relay Foods quietly started operations here about two weeks ago. The business model is simple: Customers order and pay for groceries on the company’s website. The following day, they pick them up at designated points.

Relay works with local grocery stores, small farms and specialty food producers to sell their goods online at the same retail price they charge. The vendors make their goods available to Relay at wholesale prices and share the profits with Relay.

Graham Evans, the company’s Richmond site manager, said he has been preparing for the launch since October.

Evans said part of the model is to select drop-off points that are close to major employment centers, making it easy for people to pick up their groceries after work.

“Instead of having to go the grocery store, you can get groceries in the parking lot and head on home,” Evans said.

The Richmond launch has been intentionally slow, Evans said, as they test out and add new pick-up sites.

“Just now this week we are launching a pick-up site at the Science Museum of Virginia to connect with Commonwealth employees in the area from the DMV, worker’s comp department, museums and other buildings,” Evans said.

Relay has so far has had rendezvous points through out downtown, Midlothian and Innsbrook. Evans said the company’s Richmond operation has two trucks but will soon expand to three or four. Each truck can serve groceries for about 80 people a day, Evans said. The company can continue to add trucks, which run on bio-diesel, as they add more customers, he said.

A radio campaign was launched this week on Cox Radio. They are also planning appearances at the Carytown Watermelon Festival and a Flying Squirrels game, among other events.

Originally called Retail Relay, the company was launched in 2008 by and CEO Zach Buckner and funded by angel investors in the Charlottesville area. (Buckner has a personal website, which has information about his inventions, too).

The concept of ordering groceries online has been tried before by other startups, but very few have been successful, and others were high-profile flameouts.

“You may have heard of WebVan. That had a catastrophic failure. It was terrible and scared a lot of people from the online grocery industry for a long time,” Evans, a graduate of UVA whose previous experience includes launching an artisan smoked salmon business with his father in Alaska.

Evans said distributing orders at pick-up sites was the founder’s solution to one of WebVan’s major pitfalls and biggest expenses: home delivery.

Another problem for WebVan was storing inventory. Relay fills its orders with local vendors, from whom Relay collects the needed inventory on a daily basis. Relay then puts together each customer’s order in time for pick up between 3 p.m. and 7 p.m.

Evans said the company has 12 employees in Richmond and about 25 in Charlottesville.

As far as vendors go, Relay offers an alternate distribution channel for small, local businesses.  About 30 different stores list products on the site.

Farm Fresh, which operates a grocery store in Shockoe Bottom, is the largest supplier on the site, but it’s businesses like artisan baker AnnaB’s Gluten Free that perhaps benefit the most.

Anna Strahs left her job as an IT recruiter to launch her own business selling gluten-free bagels and other baked goods.  She has been up and running for two months, selling her products online and through a handful of stores and restaurants in town, and also Relay.

“Relay Foods is great because all we do is drop off in and one location and they distribute all over Richmond. The prices they sell are identical to the ones on our menu, so we sell to them at a wholesale price,” Strahs said.

“We are definitely selling more volume, so it’s really great for everyone,”

Another local vendor working with Relay is Blanchard’s Coffee.

“They actually called us in February, told me what they were doing, and to see if we could work together,” said Tom Thorogood, the company’s resident coffee roaster.

“I think the feedback has been pretty good. People like what they are doing,” Thorogood said.