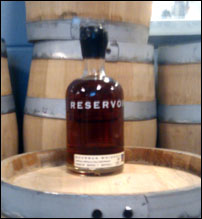 Twelve sixty-gallon barrels of corn mash sit in a Richmond warehouse. The mash will soon be transferred to a large copper still and made into whiskey.

No, moonshiners are not making a comeback.

The mash is part of the process for a licensed operation in Richmond that makes small-batch whiskey.

Reservoir Distillery partners and childhood friends David Cuttino and Jay Carpenter, both 38, are almost ready to make their line of spirits available to the public.

“The only thing we are waiting for are the bottles,” Carpenter said.

Their first run will consist of about 500 375ml bottles, at $42 each. Reservoir won’t be on ABC store shelves right away, but it will be available for special order by mid-September. Carpenter also said he has pre-orders from multiple restaurants across town.

Like the whiskey itself, getting to the point where they can legally make and sell their brew has been a long delicate process.

Cuttino said he started working on obtaining the licenses in March 2009.

“There are many, many rounds of regulation involved,” Cuttino said. 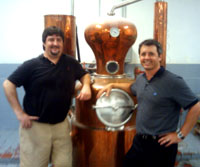 Cuttino’s taste for the whiskey business started in 2008. Working as a portfolio manager for a bond fund in New York while the financial markets were slipping into crisis mode, he began to think about his next steps. When he came across an article about the recreation of George Washington’s distillery at Mount Vernon, the wheels started turning. He researched the industry.

With enthusiasm building, he shared the idea of starting a distillery with friends while in Blacksburg for a Virginia Tech football game. Among those friends was Carpenter, whom Cuttino had graduated from Collegiate with.

Inspired by Cuttino’s excitement, or perhaps the bourbon he was drinking at the time, Carpenter joined in on the plan.

There was only one major problem: Neither knew how to make whiskey. Cuttino figured out that piece of the puzzle when he came across a bottle of craft bourbon at a liquor store in New York.

That bourbon was made by Tuthilltown Spirits in upstate New York.

“I got it, tried it and was like, ‘this is really good.’ It is so different than the commercial bourbons that are out there,” Cuttino said.

Cuttino said it was his wife who suggested he write to them and see if he could get an unpaid internship. Soon after he quit his job and spent the next six months working for free and learning the ins and outs of operating a distillery.

“Their mandate at that time was to try and spread the knowledge of artisan whiskey making as much as possible,” Cuttino said.

Last summer Cuttino and his family moved back to Richmond to bring that knowledge here. He called up Carpenter and the two got to work on formalizing the business.

Neither would say exactly how much money is being put into the completely self-funded business, but Carpenter offered a hint.

Cuttino said it would take them a few years before they are profitable.

“We aren’t taking salaries. Everything is going right back in to grow the business,” Cuttino said.

They are currently capable of producing about 150 gallons of whiskey a month, but they are shopping for the equipment they need to quadruple production. Reservoir plans to offer three kinds of whiskey: corn (bourbon), rye and wheat.

The whiskey is aged for about six months in small barrels made of Arkansas oak. The smaller the barrel, the shorter the aging time, Carpenter said.

And as for the end product, the duo is pleased with the results.

The whiskey is smooth, flavorful and without any harshness, as a reporter found out.

“It’s not made to put in ginger ale,” Carpenter said.

There’s a boom in craft whiskies in Virginia (Belmont Farms, Cacoctin Creek, Copper Fox) – glad to hear that the boys at Reservoir have joined the fray. I have only one question: when’s the first tasting party??

As a former neighbor of Cuttino’s, and a bourbon drinker, he’s got my business. C”mon Irony…ask a question!!

American know how at it’s best, and a great product to boot. Please let me know how I can get a bottle. STC grad ’78

I am assuming we cannot buy directly. I would love to get a few bottles for an upcoming golf trip. Wahoo Nation plans to widely support this Hokie enterprise as well!

I look forward to sampling their product. Sounds like like these guys are in for a fun ride when they’re able to ramp up sales.

Small batch whiskey made right here in Richmond?! Where do I place my order?

First Cirrus vodka (http://www.cirrusvodka.com/). Now Reservoir whisky. Richmond is becoming quite the boozy little town. If we keep this up, maybe we can become well-known for something besides corrupt local politicians and murder.

When you have that tasting party– I’ll send some of our Beverage Quality Frozen Water so the flavor won’t be changed! It will be our grand opening gift– let me know. Mark // City Ice 796-9423

Welcome to Richmond! I can’t wait to try this. Would love to know what restaurants will be serving this.

Congrats on doing it legally…you are going to be so rich!

Good to see a fellow Cougar and Hokie doing well. Congrats on the startup and i am happy to offer my tasting services as needed. I’ll even throw in some of our Trolley Coffee to even the deal.

Thanks for the support guys. You will really enjoy this whiskey. Right now you can only special order by asking the manager at your local ABC store. We should have retail availability in November. Send an email to [email protected] and I’ll keep you in the loop on how to get hold of a bottle and what batch is about to come out. Enjoy

@ Doug, ref Va. Gentleman Bourbon. Many bar bets have been won using the Gentleman as the answer to refute that bourbon can only be made in Kentucky. Cheers

smoother than Blanton’s? i gotta get me some of this stuff! congrats from a Wahoo!

This bourbon sounds intriguing, especially being made in Richmond like Cirrus (great potato vodka) as Mr Brockwell mentioned. If Mr. McDonald’s question as to whether Reservoir is as smooth as Blanton’s is correct, these guys will make a fortune, and the price at $42 is a bargain as I’m sure Irony would agree.

Probably one of the few businesses that will thrive no matter what happens to the economy. Good luck guys.

Can’t wait to get a bottle! As far as the bourbon vs. whiskey discussion, Virginia Gentleman can be called bourbon because the raw ingredients and beginning distillery process begins in Kentucky. The raw product is shipped to Virginia for the final distilling process. So, technically, it can be called bourbon. Generally the rule still applies that only Kentucky can lay claim to bourbon, but most bourbon/whiskey manufacturers and distillers agree that this “rule” is being relaxed with the growth of small batch distillers.

That turns out not to be the case. There is no such rule, regulation, or law. While bourbon is defined tightly by federal regulation, there is nothing in those regulations about having to be made in Kentucky. (CFR, Title 27, 5.22, standards of identity) Any whiskey made by those regulated standards in America can be legally labeled bourbon; Kentucky origins of any sort are not necessary.

Good luck in you brewing endevors. I am a huge burbon drinker, got it from my father (Ed) several years ago. We (RC Building Company) are in the process of building a micro-brewery (beer) in Charleston, SC. Would like to compare notes some day on the difference of brewing burbon and beer. Hope to taste your product some day. WIll let you know when I come thru your neck of the woods.

I’ve had the Tuthilltown product, called Hudson Baby Bourbon, and it is quite good. I’m having a hard time imagining though that a bourbon that only spent six months in oak could be worth $42 a fifth.

As per CFR 5.22(b): ““Bourbon whisky”, “rye whisky”, “wheat whisky”, “malt whisky”, or “rye malt whisky” is whisky produced at not exceeding 160° proof from a fermented mash of not less than 51 percent corn, rye, wheat, malted barley, or malted rye grain, respectively, and stored at not more than 125° proof in charred new oak containers; and also includes mixtures of such whiskies of the same type.” “That the word “bourbon” shall not be used to describe any whisky or whisky-based distilled spirits not produced in the United States. ” http://ecfr.gpoaccess.gov/cgi/t/text/text-idx?c=ecfr&sid=21224b7c634d83e0fa329bfd18bb85dc&rgn=div8&view=text&node=27:1.0.1.1.3.3.25.2&idno=27 So now we can all put that to… Read more »

Only Kentucky should be allowed to call there product bourbon. Everyone else wants to call their stuff bourbon so to be associated with the good stuff. I would prefer to let Kentucky keep their claim to bourbon fame and make everyone else aspire to higher goals with their “whiskey.” People can make new guidelines and rules; doesn’t mean it’s right.

Now I know I am living right when two friends start making bourbon. Cant wait to get my mits on some.

The founding fathers all made bourbon. Before Kentucky existed. Bourbon was produced at mount Vernon and monticello. The outdated Kentucky only traditions was a early century marketing ploy. So many great American whiskeys today come from various other states. Reservoir is delicous and follows the manufacturing guidelines defining bourbon so it is bourbon.

George Thorpe of Henricus wrote on December 19, 1620 to John Smith of Nibley saying “…and wee have found a waie to make soe good drink of Indian corne as I ptest I have divers times refused to drinke good strong English beare and chose to drinke that.”

No doubt this was the first batch of “virginia Gentleman.”

As a traditionalist…like the history of the early barrels of Bourbon county being “stamped” as to their origin. Eastern era in particular asked for the “Bourbon” by name to distiguish it….so for this purist Kentucky whiskey…and that from Bourbon county still hold the name special.

That said Revolution is a fabulous Virginia whiskey–very unique flavored from my very first glass. Hope I can get some back to The Midwest with me some day. For now will settle for a second round.