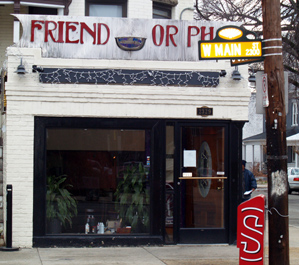 After a brief stint, Friend or Pho is no more. But another operator is ready to step in and take over.

Jake Crocker, co-owner of F.W. Sullivan’s Bar and Grille will be opening a restaurant called Lady N’awlins Cajun Café this weekend. The New Orleans-style restaurant will take over the short-lived Friend or Pho location which opened less than a year ago at 2329 W. Main St. Before that the corner restaurant was The White Dog, which had a 10-year run.

Friend or Pho closed down last Saturday after owner Rob Kaplan decided to pursue other opportunities, which gave Crocker the chance to pursue his new venture. Friend or Pho served its take on Vietnamese cuisine, primarily the beef noodle soup for which it was named.

“We had an interest in the location for a while,” said Crocker. “It was a great opportunity to extend our umbrella across the street.” F.W. Sullivan’s is just a few steps away.

The establishment is named for the female embodiment of the soul, spirit and culture of the city of New Orleans and will be an “upscale environment with a fun and festive atmosphere,” according to Crocker.

“It’s lacking here. There a couple places that offer Cajun food, but no one is doing a full Cajun restaurant and bar,” said Crocker.  Longtime Richmonders might remember Gumbo Ya-Ya, which was where Sticky Rice is now.

Lady N’awlins will feature a menu of gumbo, fried oysters, jambalaya and alligator.

Crocker, along with D. Hayden Fisher, Evan Dority, and F.W. Sullivan’s executive chef Sean Murphy make up the FWS Group that will be operating the new restaurant.

A soft opening will be held on Saturday, and the restaurant will be fully operating the following week.

This is great news! Can’t wait.

Congrats to Jake and Hayden, et al!! Sullivans has been a great addition to the Fan! Good luck on the new venture.

Richmond definitely needs one of these. It’s time everyone knew how good alligator is!

I lived in New Orleans for a short while so I am really looking forward to being able to get some great NOLA-inspired food in Richmond. But, to truly have that N’awlins feel, the place needs to have frozen strawberry daiquiri dispensers, great bloody Marys, and a jazz brunch featuring barista-made coffee on the weekends. I look forward to Jake Crocker making this happen!

Bring it! As a New Orleans native I look forward to a seeing more seafood based places in Richmond. I agree with Jennifer on what they should offer and add to that a sax player with live New Orleans jazz …and don’t for get the cajun music from time to time! New Orleans is eclectic so make it different.

I’d settle for some great beignets

Friend or Pho will be missed. Great spot on the weekends and amazing staff. If only I could say the same about the Sullivans group.

Friend or Pho was the worst pho I’ve ever had in my life, my Vietnamese friends though it was an abomination, not to mention the name played into the frequent mispronunciation of the dish.

I’m excited for some good Louisiana food but the name doesn’t really make sense. Cajun food is distinctly different from Creole, and they don’t have Cajun food in New Orleans with the exception of maybe Donald Link’s restaurants. It will be interesting to see if they can hang with Chef Nate at Louisiana Flair, who puts out some really exceptional food.

Although I have loved Sticky Rice all these years…I still miss Gumbo Ya-Ya!

Definitely excited for this new venture and even more so that it is coming from the folks at Sullivan’s which has been a bright addition to the fan scene!

Very exciting news! Good luck Lady N’awlins and Chef Sean! I am sure the menu will keep us coming back for more!

yahooo—can’t wait. I love that kind of food

The best way to get New Orleans-style food is to actually go to New Orleans. Nothing compares.

With Sean Murphy as head chef, this will be THE place to be for N’awlins inspired cuisine!

Sounds like a great addition to the Fan. Looking forward to so good gumbo. Please have beignets.

I miss the food and the atmoshere at Southern Comfort………they had some good Cajun on their menu! Good luck to the new restaurant~

Good luck to them, though there is great new orleans food in Richmond – it’s just not a bar. But if you miss real New Orleans food, go to Louisiana Flair. Its the real thing, I’m pleased to say

But they only make beignets wednesday mornings…

This sounds like a great new place to visit. I think it’s a good service that you are featuring new businesses and giving Richmonders the information on entertainment.

With a wife from Cajun country and years living with bonafide “Coonasses” , we are always interested in the potential for Authentic Louisiana food. I will not sugar coat the fact that most attempts are abject failures. I hope that this will not be another; however, I can also state with great certainty, that the fine business men of this company will be hard pressed to unseat Richmond’s current Cajun Top Chef and New Orleans native, Chef Nate from “Louisiana Flair.” Good luck gentlemen, the Louisiana faithful will be by for a “Cajun Check” shortly. We are looking forward to… Read more »