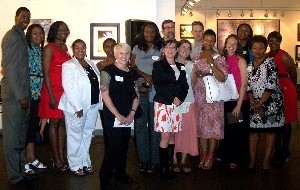 Sometimes it pays to make a business plan.

NVNV’s Fourth Annual Business Planning Contest, held at the Crossroads Art Center on Staples Mill Road, selected the winners from a group of the organization’s clients who submitted a business plan.

First place, plus a $1,500 prize, went to Broadscope Media, a video production company that has been up and running since March.

Hal Dowdy and Noah Pearcy worked together for more than 20 years in the video production industry before deciding to start their own company. The win came as a surprise.

“We knew we had a good plan, but we didn’t have any idea we’d win,” said Pearcy.

The pair have a studio on Old Warwick Road and serve corporate and retail clients. Dowdy said they plan to build a new recording booth with their winnings.

Second place went to a plan for a dumpling food cart called And Dim Sum.

Founder Elizabeth Kincaid said she is working on getting the business up and running with carts in the financial district within the next few months.

Other interesting plans included Coffeehouse and Laundromat, a place to get coffee while you do your laundry, and Masquerade Costumes, a shop that sends people out to corporate functions dressed in some type of get-up.

Plans for a bridal consignment shop and a bike-cleaning service were also presented.

Barb Upchurch, director of the Women’s Business Center at NVNV, said most of the people in the competition had completed a six-week class at the center on how to write a business plan.

“It’s really to give up and coming small businesses an incentive to complete their business plans,” said Upchurch.

The business plans are judged mainly on the financial model and whether the business could be successful.

“It comes down to what is realistic now and will the business be viable and could they run the business and make a profit,” Upchurch said.

NVNV has helped start 80 businesses since October, and Upchurch said she expects that number to pass 100 within the year.

Planning stages of any business venture is at the heart of all serious cases.