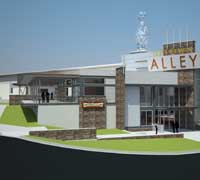 A convenience store magnate is set to start construction on a massive entertainment complex in Chesterfield County.

On Tuesday, Steven Uphoff, founder of Uppy’s Convenience stores and Southside Oil, will unveil his plans for Uptown Alley.

The plan for the facility has been in the works for four years. Uphoff bought the property at the intersection of Commonwealth Center Parkway and Brad McNeer Parkway off Hull Street Road in January 2008.

“It’s taken a while to go through the concept development process and the architectural design process,” he said.

Uphoff said the first floor would be more family-oriented, with rooms for children’s birthday parties. There will also be a sports bar called Stevo’s Pub.

“We wanted people to feel like they could bring their children,” Uphoff said.

Upstairs will be a more modern adult area with Uphoff Rotunda, a bar that will seat 100 people.

A 29-foot stainless steel bowling pin on top of the building might help attract customers.

Uphoff said that the building can hold about 1,700 people and that he expects to see 800 to 900 each day at one time.

The first phase is costing $19.6 million and is going to take about a year to develop. Uphoff said he hopes to have it open next June.

Construction on the complex will begin Tuesday at the groundbreaking ceremony.

The second phase planned for the $40 million, 14.5-acre project might include a hotel and day spa.

Uphoff said he expects the complex will draw between 250,000 and 300,000 people a year, including athletes who will be using SportsQuest.

“I believe it will be a huge entertainment facility for athletes and their families,” he said.

Taylor & Parish is the contractor on Uptown Alley, and Trifecta Management Group will handle the day-to-day operations when it opens.

For not only this but for all projects which “scorch the earth”, the County should require a bond to be posted to restore the land to its pre-existing condition. That way, when the project turtles in five years, and then becomes an eyesore as it sits vacant for another five [as so many do in Chesterfield County], the bond would pay to have the parcel returned back to nature. Trump has his Tower so I guess Stevo can have his pub and rotunda. Exactly how many Chesterfield County policemen will be permanently assigned to the complex [and has he made… Read more »

Blackbeered, go do a little research on how facilities like this in other major metro areas do, then come back and apologize for the ignorance you’ve posted to date.

Do the people that frequent a pub want to go to a family friendly place to drink? I don’t think so.

The location is ideal near a bunch of shops and the Commonwealth 20 movies. The surrounding neighborhoods are generally upper-middle class and are likely to prefer the higher end bowling center to its outdated competition. It will be like choosing between Chipotle and Taco bell. What would you rather have? I don’t think this is a “scorched earth” project. These types of luxury centers have worked in other cities and I personally think they provide a better experience. It takes bowling to another level and makes it more appealing to a wider crowd. I predict we will see concepts such… Read more »

Congrats to Steve Uphoff for putting this together.

Mr. Blackbeered,
Please return to harassing whaling ships. You add virtually nothing to the discussion.

Mr. Marrs,
Your snide comments demonstrate exactly why voters rejected you several years ago. In person and online, you sound like the immature 12 year old boy who was picked last for dodgeball.
To clarify, it is an almost 4 acre ENTERTAINMENT complex. It is upscale. Read the article. See the plans. It’s more than a bowling alley.

Patrick,
Your points are well made. Thanks for bringing a bit of salience to the dialogue.

Wow, touched a nerve I guess. Look, I’m all for you and your project. I wish you every success. I just don’t understand why you seem to feel that a bowling alley has to be disguised as something else. Why can’t we use standard language instead of trying to hide behind euphemisms? It’s as if you are sensitive that a mere bowling alley is not good enough, you have to pretend it’s really something else. I don’t think I was being snide. Personally, I like going bowling on occasion, and I’ve been known to have some chicken fingers, fries and… Read more »