The commercial real estate market remains in a holding pattern, and speakers at the VCU Real Estate Trends Conference said it would take banks unloading repossessed properties to get things moving again.

More than 700 area real estate professionals gathered Tuesday at the convention center for the 21st annual conference held by the Virginia Commonwealth University School of Business.

“There is an overhang of properties in our banking system yet to be foreclosed on, and everyone knows it,” he said.

Dotzour also said banks need to get the assets they have foreclosed on back on the market.

“If you are tired of transaction volume the way it is, you need tell Congress it’s time to clear commercial real estate out of the banking system,” Dotzour said.

But conference attendees don’t expect any big changes in the market over the next year. 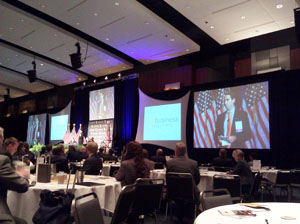 The conference closed with a panel on the state of commercial real estate lending.

Kim Diamond, senior managing director of the Kroll Bond Rating Agency, said investors are slow to jump back into the market for commercial mortgage backed securities (CMBS), which funded much of the commercial development up until the 2008 financial crisis.

“The CMBS market has been struggling over the last year or so. The notion is that there is a very shallow investor base,” Diamond said.

“At the end of the day, we need job growth so people feel comfortable that you will see good performance in real estate,” Cropp said.

As far as the existing CMBS loans that will be coming due over the next few years, Jeffery Fastov, managing director of investment banking at Credit Suisse, said that most borrowers and lenders will figure out a way to refinance maturing loans.

“If the borrower is willing to pony up a little bit of money, the servicer will stretch it out,” Fastov said, “There is a huge capacity to kick the can down the road.”

Louisville commercial real estate is in the same boat. Money is tight and vacancies are still up in our market.

The commercial real estate market in my area (MO) has a vacancy rate of 47% my rental property business is stronger for many of the reasons you listed here. Also not indicated here was that banks are not lending money to perspective buyers as they had in the past. One of my loans didn’t close because the bank had read an article in the local paper that the company my client worked for MIGHT be moving and declined the loan.

Very informative! Im impressed how people get to find ways on downsizing some big problems through tough decisions and solutions.

The sooner the banks and states reach a settlement over foreclosure processing, the sooner housing market problems could actually be managed and even stabilized. This step is the most important factor for the market to recover.

I bought a repossessed house on an online auction and it was worth while. The auction process is simple and straight forward. The company through which I bought my new home was very helpful and everything went through without a hitch. Communication and participating in the auction was done online, and I can tell you this process definitely saved me some time.