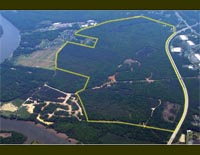 Economic developers in Chesterfield County are fast-tracking a massive distribution center, but officials are keeping mum on who it’s for.

Several sources in real estate say they’ve heard that Internet retail giant Amazon might be behind the development. And one commercial real estate broker said he toured industrial space with Amazon’s people.

The Chesterfield Economic Development Authority submitted the site plan for the more-than-1-million-square-foot single-story distribution center at the end of October, and the planning department responded with comments last week.

One million square feet is about three times the floor area of the Greater Richmond Convention Center, or around 20 football fields.

The distribution center site, which includes plans for more than 2,800 parking spaces, is located in the Meadowville Technology Park, which consists mostly of forested land east of Interstate 295. Chesterfield County’s Economic Development Authority acquired the 1,300-acre tract in 2005. It was originally put together with the intent of attracting semiconductor plants.

Northup Grumman is the only business in the park, where the defense giant has a 167,000-square-foot operations center that employs more than 600 people. That $35 million project broke ground in 2006.

The proposed distribution center would be just southeast of the Northrop Grumman building and accessible from Meadowville Technology Boulevard, which is under construction. Local civil engineering firm the Timmons Group drew up the plans.

A ribbon cutting for the Meadowville Interchange, which provides access to the park from the interstate, is scheduled for Dec. 15. The road project, financed by state, federal and local funds, is estimated to have a budget of about $17 million.

“This interchange is just going to position the park and further position the county to be very competitive for projects,” Davis said.

Evan Magrill, a broker with Cushman & Wakefield | Thalhimer, said he has heard about the project but not who it’s for.

“I’ve been poking around but haven’t heard anybody on the inside of it with a comment,” Magrill said.

“It would be one of the largest buildings in the area.”

BizSense was unable to confirm that Amazon is a potential tenant, but that idea isn’t far-fetched. Amazon has a fulfillment center and data center in Sterling, Va.

The site and size of the building are similar to those of other Amazon fulfillment centers, where items purchased online are placed into packages and dropped in the mail. The Meadowville site is close to UPS and FedEx shipping hubs.

The Seattle-based company said in its recent third quarter earnings call that it has stepped up plans for building fulfillment centers, stating that it planned to build 17 this year, two more than originally planned. The company’s fulfillment centers are known to employ about 1,000 people each.

The president of a local construction firm said he had heard about the proposed warehouse and that he heard Amazon mentioned as the likely user.

An industrial real estate broker said that he heard the same thing and that he had shown some properties to Amazon representatives about eight months ago — but that they were looking for a data center site.

Amazon is also considering a site in Delaware, according to DelwareOnline.com. Local development officials there are also keeping mum.

The company is nearing completion of a million-square-foot distribution center near Columbia, S.C., representing a $125 million investment and creating an estimated 2,000 new jobs this fall.

Located in Virginia’s capital, the Greater Richmond Convention Center is one of the most desirable meeting destinations in the Mid-Atlantic region. The 700,000-square-foot facility sits on 5 and a half city blocks. Interior accommodations include 178,159 square feet of exhibit space, meeting and banquet rooms and the 30,550-square foot Grand Ballroom.

So, the dist center would be about 1.5 times this size, not 3 times. But thats still a lot of concrete nevertheless.

If this is Amazon, their distribution centers pay on average about $17, or $680 a week. That’s $35,360 per year. Has anyone asked where they are going to live? At that salary, surely not in Chesterfield County. Chesterfield needs business. It’s tax base is so far out of whack it’s silly. So this is a good thing. But if you’re creating jobs for people who can’t afford to live in your county, what will that do for the environment as those employees burn off 20 miles of fuel or more each way to get to work? What does it do… Read more »

@Stephen Weisensale – the GRCC has multiple floors. It’s possible the article was referring to the footprint of the buildings themselves, not the total usable square footage.

Your right Frank (see above), we should turn away business like this, and tell them to go away. Who needs their stinking money, if it means people with a household income of $70k/yr. will have to work there.

Why those poor people will commute past our homes, and rob, rape and kill us. Or worse yet, live near us.

James, you live in a dream world where everything you want happens…

without checking, I bet 70k is higher than the median income of Chesterfield County… yep, sure is. Albeit by a little.

So 2 people working at the center and living together would have a wealthier household than average in the county. Sounds fine by me. And will employ people who don’t have a whole lot of opportunity for other jobs…

James, what planet are you on? 2009 per capita income for chesterfield county is $31k. As somone else noted, median household is $70. If amazon is bringin in a large amount of $36k job, you should be happy about that…but i assume you’ve figured this all out by now.