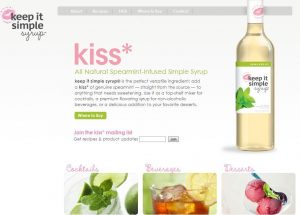 Life got a little sweeter for a former consultant when she left the corporate world behind and decided to pour her love of mojitos into a business.

Susan Martinson got the wheels turning for her startup, Chef Sous, after experimenting with a syrup recipe a few years ago, and she’s launching into full-scale production this year.

Martinson concocted the idea of Keep It Simple Syrup, an all-natural spearmint-infused syrup that spices up alcoholic drinks, coffees, teas and desserts, in June 2008.

But like a slow pour, getting the business up and running took time.

After working for 10 years as a consultant for a major financial services company in New York, Martinson was relocated to Richmond in January 2005. Four months later, Martinson and 200 other employees were laid off.

“I had just purchased a house and a car,” Martinson said.

She took a job as a barista for a popular coffee chain, and the idea for a natural syrup bubbled to the surfaced.

“It didn’t make sense to put chemical [syrups] in coffee that costs $4 a cup,” she said.

Martinson took a job at another major bank before realizing the corporate world wasn’t for her.

“I even got my brokers license, but I knew for a couple of years I wanted to do something in food,” she said.

In early 2008, she stumbled across Lavender Fields, a Glen Allen herb farm run by a couple who were concocting their own recipes to make natural drinks.

“They let me try a glass of lavender lemonade,” she said. “I looked at their recipe and tweaked it and came up with a spearmint version.”

After perfecting her concoction in her Glen Allen home, Martinson approached the Virginia ABC board that summer to start selling her product.

She wouldn’t share how much she’s invested in the business, but Martinson said she sold her house and has been living on savings to get her one-woman venture off the ground. 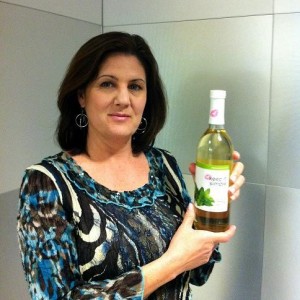 Keep It Simple syrup is made with pure cane sugar, filtered water, citric acid and mint leaves that are steeped to extract their flavor.

“There are plenty of flavorings and cocktail mixers, but I haven’t seen any that are all natural,” she said.

One of the few other natural syrup firms is Small Hands Foods, which launched in California a few years ago.

Martinson’s syrup will be sold in 750 ml bottles for $13.50 at ABC stores across Virginia, including 12 stores in Richmond, Midlothian, Glen Allen and Ashland.

She has already sold 180 cases of the syrup to the ABC for distribution, and her product should be on shelves by Dec. 24.

Martinson has her sights on other outlets, too.

“More often than not, bartenders have no fresh mint on hand, so for the bartenders this will make the drinks come quicker,” she said.

She hopes to start selling the syrup in Fresh Market, Whole Foods and Good Foods. She’s also talking with Café Caturra in Short Pump about carrying her product.

As far as nonalcoholic uses go, Martinson said the syrup is great for topping off a bowl of fruit or drizzling on a piece of cake.

“A lot of people think mojito, but there are so many things you can do with it,” she said. “It’s not only for the cocktail bar, but a coffee bar, too.”

Martinson plans to expand to other flavored syrups once her first product takes off.

Way to go Susan – Great article and it is fantastic to see you pouring on the success (pun intended)!

Its great to see you take the leap of faith and follow your passion. Life is too short to not at least try to chase the dream. You will do well, keep up the good work!

A product as close to nature as possible. It’s great knowing there are genuine products and people at work making their dream come true. Thanks Susan!

Way to Go Susan!!! Great Job – Inspiring to see you doing what you really love… Best of Luck – I want to try some in baking too!