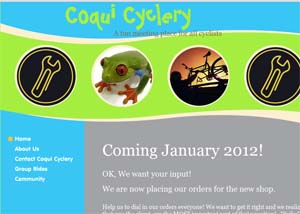 Two entrepreneurs are going where the customers are. Or at least where the potential customers meet before going on bike rides.

Ann “Spike” Toler, 50 and Clint Kronenberger, 40, said adjacent to Forest Hill Park was the perfect spot for their new bike shop, Coqui Cyclery, because of the nearby trails and the number of cyclists in the area.

“We all gather at Crossroads after our rides,” Toler said, referring to the coffee shop across from the park.

The shop, set to open late this month, will fix and sell bikes, as well as lead weekly group rides through Forest Hill Park.

Kronenberger said the shop will carry everything from “the high end triathlon bikes to a child’s first bike with training wheels on it.”

He said the shop will carry Pivot Cycles, a brand based in Arizona.

And the pair hopes to capitalize on Richmond’s growing bike scene: Richmond hosted the XTERRA East Championship in June, which features mountain biking, running and swimming events in and around the James River. Richmond MultiSports has also hosted triathlons in the area since 2004.

And in 2015 Richmond will host the World Cycling Championships, a major international road race.

The business partners aren’t the first to roll out a bike startup here for the avid cyclist either. Richmond Cycling Corps, a non-profit that takes underprivileged youths on cycling trips, recently opened a bike studio in Scott’s Addition that sells bikes and offers cycling classes.

A love of bikes brought the two together. Kronenberger, a longtime bike mechanic, built a mountain bike for Toler.

“That’s when I realized how good he was,” she said.

Kronenberger has been tinkering around with bikes since he was a kid.

His father owned a bike shop in Florida for 20 years before Kronenberger took over and ran it for 15 years. After moving to Richmond three years ago, he worked as a mechanic and manager for Endorphin Fitness.

After about a year, Kronenberger decided he wanted to own his own shop again.

“I couldn’t work for anybody else. I had to do it myself,” he said. “My clients have been pushing me to open up my own store for the last year or two.”

Coqui will be the first business to go into the shuttered space in seven years. It was originally built in 1940 and served as Owen’s Service for years before being converted into a grocery store, a sign shop, a lawnmower service business, and finally an Appliance King.

The name of the shop is a common name for several species of small frogs in Puerto Rico. Toler said the name came to her after she traveled to Puerto Rico in October.

Kronenberger and Toler plan to start selling bikes within the first month of opening the shop and start offering group bike rides from the shop in the spring.

This is a great place to have a bike shop; probably best location in the city. Not only located by the Forest Hill Park trails, but also on a major road bike route that many riders travel. I plan my weekend ride to end at Crossroads for coffee, so having a bikeshop next door will be awesome. I was introducted to Clint about 6 months back from my buddy who says he’s the best and most honest bike mechanic in the area. Nice to see that he is going to be here, I know I will be there for my… Read more »

Good luck with the launch. Great to see you moving into Forest Hill.

I have been oberving the renovations as I ride my bike past the shop routinely. I have to say I can’t wait until it opens. I’ll be there for sure to buy some odds and ends.

Best of luck and THANK YOU for investing in Semmes Ave and the area.

Great idea, now if we could only convince Appomattox Canoe to move to the area as well.

Welcome to the neighborhood! I know you will have much success here. I personally will be a frequent visitor. A tune up while getting my coffee perhaps!

Good luck and best wishes for many many years of successful and rewarding business.