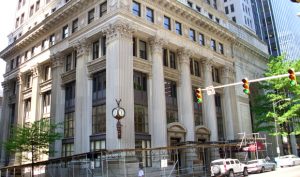 One of Richmond’s first skyscrapers is getting the old historic-rehabilitation-into-apartments treatment.

Rushmark Properties purchased the building in 2000 for $9.5 million. The most recent tenant was North Carolina-based bank BB&T, which moved in July 2010 to Riverfront Plaza.

“We caught wind that BB&T was thinking about moving out, so, before they moved, we were talking about what the best use of the property would be,” said Patrick Kearney of Rushmark Properties. “Commercial real estate has been slow nationwide. The building lends itself to apartment because of the small floor plates, so it was decided that apartments were the best alternative.”

Rushmark will spend $30 million on the First National Bank apartments on a loan from Bank of America, Kearney said.

The apartments will range from one to three bedrooms and 562 square feet to 2,235 square feet.

HITT Contracting, a Northern Virginia contracting firm, is doing the renovation, and Hampton Roads-based Drucker & Falk will manage the apartments. Commonwealth Architects, a Richmond company, is the architect.

“With the decline of commercial real estate in the area, we thought this would be a great opportunity to convert the building into apartments,” said Bernard Potere, who is the project manager for HITT. “It’s very exciting, especially with all the history behind the bank building.”

The bottom floor will be zoned for retail businesses, Potere said.

According to a news release, the First National Bank building was built in 1913. First National Bank, which formed days after the Civil War ended, hired New York architecture firm Clinton and Russell to design its new headquarters.

Clinton and Russell were also the design lead on the American International Building, the tallest building in lower Manhattan,  and the iconic New York Cocoa Exchange building.

Downtown Richmond’s old buildings are popular targets for conversions. A few blocks away from the forthcoming First National Bank apartments, about 240 apartments are coming online at the former Hotel John Marshall.

Beautiful building that will see new life—great news! And more residents downtown, too!

No doubt, this is the finest looking conversion building downtown and it has adequate parking. The beat goes on in Richmond apartment development.

With all of these great new projects it will be great to finally see life in this area on the weekends. I would love to see some stats on the tax money generated from all of the projects that have come to life downtown in the last 10 years. Think back to all of the unimproved or abandon buildings or those that didn’t exist at all back in the 90’s. That’s a lot of real estate tax revenue.

We’re either missing info or this is an incredibly optimistic use of capital.

It’s likely this company is taking advantage of the tax credit program for renovating a historic building where much of the rehab costs are reduced making deals like this more attractive.

Jesse, don’t forget this was 150k sf office building for 12 years. Even at a low price/square foot and partial occupancy they probably made some money over a decade+ of leasing. Excited to see this project happen downtown!

Very excited to see this article on my FB newsfeed. I’ll be moving to Richmond (from Phx, AZ) in March and settling down there for good. One of the big reasons I chose it was because I think it’s so great to see historic buildings being renovated like this. Can’t wait to see this building in person!

I love the idea of all the apartments in Richmond downtown area and will consider buying one !! Sounds like this capitol City is really getting beautified !!

We are thrilled to be part of the revitalization of this stunning iconic building! To read more about it… Media Details: http://bit.ly/xvIVvf

Anita – You don’t buy apartments (unless you have millions to buy the whole building). You rent them.

There are plenty of condos for sale downtown Dave. This is great news.

this is great news. i am the city council rep and would love to meet owner/developer

I am the City Council rep. I would like to meet owner/developer

I have lived here for 10yrs now from up North. When i first moved here i was shocked to see the downtown area, and have said to myself many a day what i would do if i had the Funds. I did some history on the area and found great pics. This is nice that i will be around for the next round of history. @DaveM you can buy apartments, they are called Condos, it is the same as buying a house without the land.