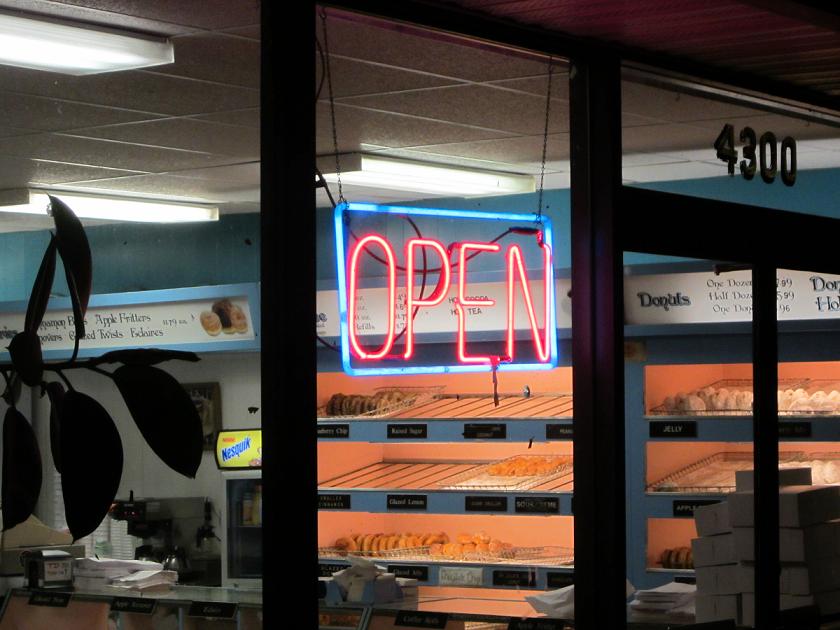 Eastern Henrico is a ghost town in the wee hours of the morning. But at Country Style Donuts on Williamsburg Road, a neon “Open” sign burns 24 hours a day, six days a week, coaxing the shop’s loyal patrons to stop in.

“The glazed just come out?” he asked as he walked to the counter.

Cook, a Norfolk State University student, has been coming to Country Style long enough to know the schedule. And the glazed doughnuts — Cook’s favorite and Country Style’s most popular — are always ready first.

Over the next four hours, Isaac and Chaaban will add batches of Boston Cream, Apple-N-Spice, Blueberry Jelly and the rest of Country Style’s 38 varieties to the shelf, just in time for the regular crowd to start rolling in at about 6 a.m. 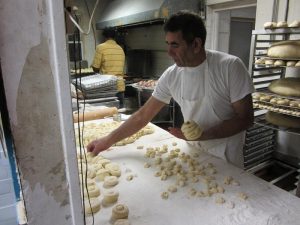 It’s the beginning of another day at Eastern Henrico’s old-timey, homemade doughnut shop. Country Style, which opened in 1968, sells about 200 pounds of pastries each day to a legion of morning regulars, airport travelers and roaming late-nighters, said co-owner Wafaa Nassereddine.

Wafaa’s husband, Steve Nassereddine, emigrated from Lebanon when at 18. He settled in Richmond and worked at Dunkin’ Donuts. The Nassereddines later co-owned Golden Donuts on Main Street.

In 1984, after their lease ran out and Golden Donuts closed, the Nassereddines purchased Country Style. At the time, doughnuts cost 49 cents, and the Nassereddines’ son Merwan was 5 years old.

Merwan, now 33, said little has changed since his family took over.

They painted the trim a lighter blue, added some seating and designed the shop’s menu signs. But Country Style still uses the same homemade recipes and serves the same loyal patrons.

“All these people have been coming in here for many years,” she said. “It’s like a small hometown. Everybody knows everybody.” 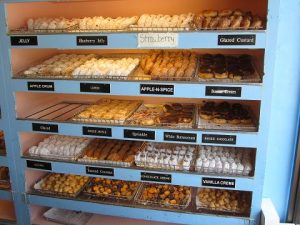 That loyalty has helped Country Style spread to the Fan, where its doughnuts can be found at Lamplighter Coffee. And a second Country Style location might be in the works. Merwan said his brother, Nader Nassereddine, has been considering going into a second store for about six months now. He mentioned the West End and Southside as possible locations.

Country Style sees its biggest rush in the morning, starting about 6 a.m., Merwan said. Business slows down a bit during in the late morning hours before lunch, but the early evening hours bring the crowds back.

At 10 p.m., Isaac and Chabaan come back in. They cook through the night at a mostly empty shop.

They’ll serve a few late night passers-by like Cook or Johnathan Fleming, a bartender who occasionally drives from his Jackson Ward home after work.

Every Tuesday morning, Burnette said, the same customer shows up at midnight. He’ll sit at the Country Style bar until Isaac or Chabaan carry the first batch of glazed doughnuts out, buy the first few Country Style doughnuts of the week and take off – until next Tuesday.

I LOVE you Country Style Doughnuts!

Don’t go too far west or south! Either of the new locations should be closer to me. 🙂

They are the best and personally would love to see them in a west end location.

Absolutely the best donuts in Virginia. Possibly the world.

Wonderful donuts–come to the West End.

The Best Apple Turnover in the State…Don’t change too much @ the new location.

I agree. Best ever. Move closer to downtown!

One interesting thing I noted on my last visit.

Individual doughnuts cost 96 or 99 cents (can’t remember which it was).
Half-dozen costs $5.99

It costs more to buy them as a half-dozen than to buy the individually. Kinda odd.

Is it a little selfish for me to not want them to move to the West End or South Side?

Best doughnuts ever. I have so totally missed them since moving to Short Pump area. You would make a killing in Short Pump and then I won’t have to drive to East End anymore.

I’ve been wanting to try this spot for years…this great piece will finally make me get it off my bucket list – thanks, BizSense!

I wonder what the price of donuts would have to be to cover the high lease rates in the West End?

I’ve heard multiple times that the folks working in Innsbrook aren’t too happy with their doughnut options. The only place close by is Daylight Doughnuts, but I’ve heard the quality is so-so. Your doughnuts taste much better, so there might be a good oportunity for you if you can locate close to Innsbrook in the West End.

The article doesn’t say the shop is moving; just that the owners are considering a second location.
Don’t even think about leaving the East End!

I don’t care what fancy new donut shops open in Richmond, Country Style still has the best donuts. By far.

I have gotten into verbal disputes with people who try to say there are better donuts in Richmond! Y’all are the best and so worth the drive!!!!!

Not only are your doughnuts awesome–the best in miles and miles– you are just VERY NICE people. Carry on the tradition!

Not only verbal disputes but physical as well! It’s that good.

I give in — I’ve never been there and now am salavating for one of their donuts! Talk about good word of mouth advertising from loyal customers.
Next up — a donut shop / fro-yo shop in a apartment conversion building downtown!

A delight to the senses…I’ll have what im having